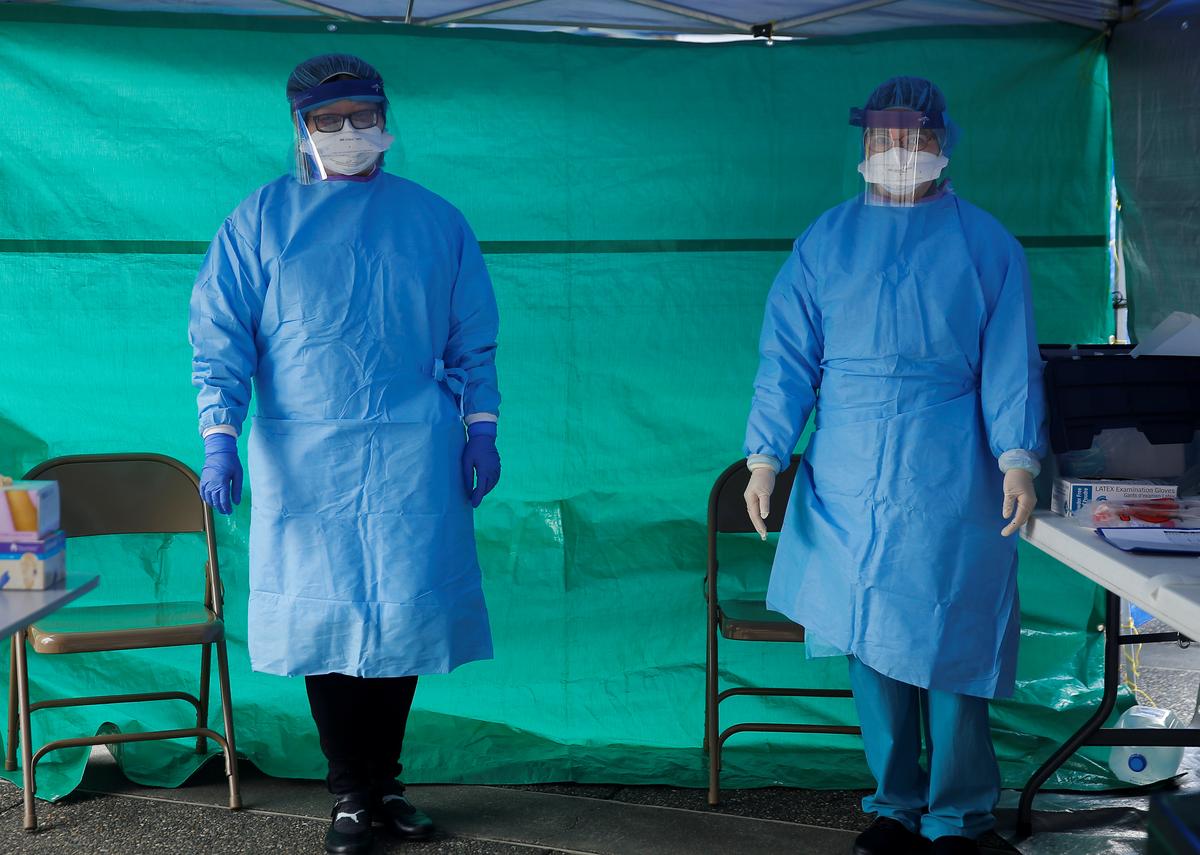 LOS ANGELES/NEW YORK (Reuters) – U.S. nurses and doctors on the front lines of the battle against the new coronavirus that has infected tens of thousands of Americans and killed hundreds are shellshocked by the damage that the virus wreaks – on patients, their families and themselves.

Nurses and doctors describe their frustration at equipment shortages, fears of infecting their families, and their moments of tearful despair.

These are some of their stories:

Dr. Arabia Mollette, an emergency medicine physician, has started praying during the cab ride to work in the morning. She needs those few minutes of peace – and some lighthearted banter with the cafeteria staff at Brookdale University Hospital Medical Center in Brooklyn at 6:45 a.m. – to ground her before she enters what she describes as a “medical warzone.” At the end of her shift, which often runs much longer than the scheduled 12 hours, she sometimes cannot hold back tears.

The hospitals where she works, Brookdale and St. Barnabas Hospital in the Bronx, are short of oxygen tanks, ventilators and physical space. Seeing the patients suffer and knowing she might not have the resources to help them feels personal for Mollette, who grew up in the South Bronx and has family there and in Brooklyn.

“Every patient that comes in, they remind me of my own family,” she said.

At least one emergency nurse at a Northwell Health hospital in the New York City area is wondering how much longer she can take the strain.

After days of seeing patients deteriorate and healthcare workers and family members sob, she and her husband, who have a young son, are discussing whether she should leave the job she has done for more than a decade.

The emergency room, always a hotbed of frenetic activity, is now dominated by coronavirus cases. There are beds all over the waiting room. The nurse, who spoke on condition of anonymity, said she sees family members dropping off sick relatives and saying goodbye.

“You can’t really tell them they might be saying goodbye for the last time,” she said.

On Thursday, some nurses and doctors were brought to tears after days of physical and emotional fatigue.

“People were just breaking down,” she said. “Everyone is pretty much terrified of being infected … I feel like a lot of staff are feeling defeated.”

At first, she was not too worried about her safety since the coronavirus appeared to be deadliest among the elderly and those with underlying health conditions.

That confidence dissolved after seeing more and more younger patients in serious condition.

“At the beginning, my mentality was, ‘Even if I catch it, I’ll get a cold or a fever for a couple of days,’” she said. “Now the possibility of dying or being intubated makes it harder to go to work.”

There is no official data on the number of healthcare workers who have contracted the virus, but one New York doctor told Reuters that he knew of at least 20.

A Seattle nurse has started screening patients for coronavirus at the door of her hospital, a different job from her usual work on various specialty procedures.

She doesn’t talk about her new job at home, because she doesn’t want to worry her school-aged children, she said. Her husband does not understand her work and tells her to decline tasks that could put her at risk.

But she is nervous about having to separate from her family if she contracts the virus.

“I’ll live in my car if I have to. I’m not getting my family sick,” she said.

The nurse spoke on condition of anonymity because she is not allowed to speak to the media.

During her last shift, she was told to give symptomatic patients napkins to cover their faces instead of masks – and not to wear a mask herself. She ignored that and wore a surgical mask, but she worries less experienced staff heeded the guidance.

“We get right in their faces to take their temperatures because we do not have six-feet-away infrared thermometers,” she said. “The recommendations seem to change based on how many masks we have.”

Her hospital has put a box outside for the community to donate masks because they are so short of supplies.

She blames the government for not doing more to prepare and coordinate: “People should not have to die because of poor planning.”

Nurse Angela, 49, says the emergency room at her hospital near Flint, Michigan, is eerily quiet. “We’ve all been saying this is the calm before storm,” said Angela, who asked that only her first name be used.

The patients who trickle in are “very sick” with the COVID-19 respiratory illness, she said, “and they just decline really quickly.”

As they go from room to room, the nurses discuss how many things they are contaminating due to their limited protective equipment.

“You’d have to walk around with someone with Clorox wipes all night walking behind you,” she said. “The contamination is just so scary for me.”

She accepts that she and most of her colleagues may be infected. But she is worried about her daughter and her sister, who are both nurses, and she worries about infecting her 58-year-old husband.

Angela’s daughter has sent her three children, including an 18-month-old who suffers from asthma, to stay with their father to avoid possibly infecting them.

“I normally see my grandchildren twice a week and I haven’t seen them. It’s hard. I just cannot fathom what my daughter’s going through,” Angela said.

Many of her co-workers have done the same, packing off children to live with relatives because they are terrified, not so much of contracting the disease, but of passing it on.

Some of them are talking about quitting because they feel unprotected.

Angela would not judge them, she said, but she told a friend recently, “You have to remember, what if your kid gets sick or your mom gets sick, who’s going to take care of them when you take them to the hospital if all of us just leave?”