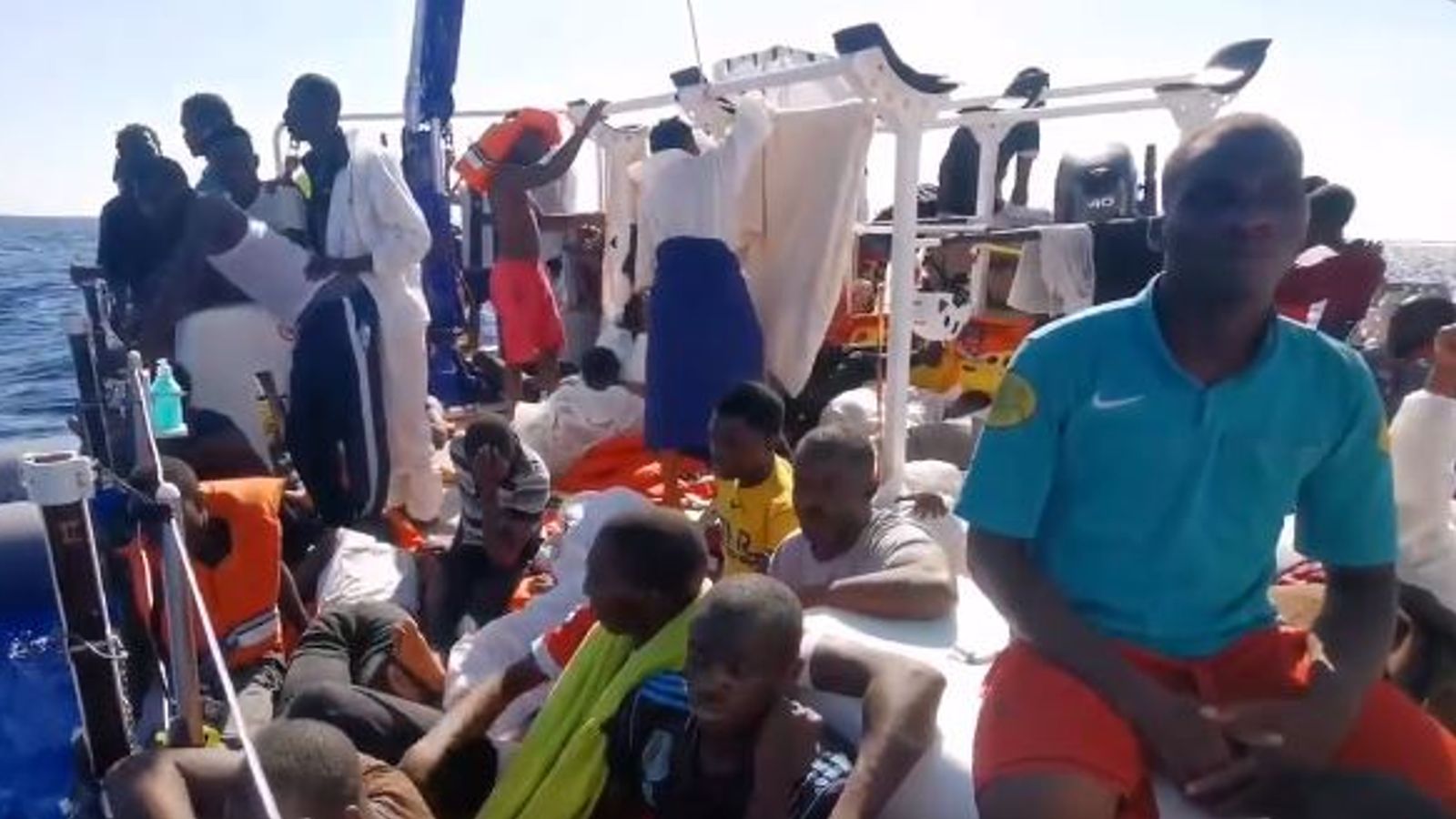 The Italian coastguard has helped a rescue boat funded by British street artist Banksy after the vessel became stranded in the Mediterranean Sea.

The boat was unable to move due to an overcrowded deck after picking up 219 migrants off the Libyan coast since Thursday.

The crew said on Twitter they were close to declaring “a state of emergency” as the already-crowded ship had lent assistance to a boat with 130 migrants and a dead body onboard.

The crew claimed European officials ignored repeated calls for help – but the Italian coastguard has since told Sky News that one of its ships has taken on board 49 “of the most vulnerable” refugees, including 32 women, 13 children and four men.

Used to help migrants in the Mediterranean trying to reach Europe from North Africa, the 31-metre-long motor yacht, which is a former French navy boat, features some of Banksy’s trademark work, including a girl in a life vest holding a heart-shaped safety buoy.

The artist reportedly asked the former captain of several NGO rescue boats, Pia Klemp, to use his money to fund “a new boat,” which was named Louise Michel after a 19th-century female French anarchist and teacher.

On Friday morning, the crew posted on the boat’s official Twitter page that they had rescued 89 people, including 14 women and four children, and were seeking a place of safety for them to disembark.

That evening, it said it lent assistance to another overcrowded boat, which was filling with water, had a dead body onboard and many more suffering fuel burns.

“Louise Michel just responded to a mayday relay by #Moonbird aircraft for a rubber boat in distress that had no movement & was taking in water,” the tweet read.

“Louise Michel proceeded at full possible speed & handed out life vests to 130 people to secure the situation. Authorities, your turn.”

The crew said they put emergency calls out to agencies from Germany, Malta and Italy but were ignored.

They wrote on Twitter on Saturday: “#LouiseMichel is unable to move, she is no longer the master of her manoeuver, due to her overcrowded deck and a liferaft deployed at her side, but above all due to Europe ignoring our emergency calls for immediate assistance.”

“We repeat, #LouiseMichel is unable to safely move and nobody is coming to our aid. The people rescued have experienced extreme trauma, it’s time for them to be brought to a #PlaceOfSafety. We need immediate assistance.”

The crew posted a video of the overcrowded boat, writing: “These are the survivors you are turning your back on #EU. After escaping untold horror and inhumanity they need a place of safety.”

🔴Alert! #LouiseMichel assisted another 130 people – among them many women & children – and nobody is helping! We are reaching a State of Emergency. We need immediate assistance, @guardiacostiera & @Armed_Forces_MT. We are safeguarding 219 people with a crew of 10. Act #EU, now!

A crew of 10 European activists are on the Louise Michel, which last week left Burriana in Spain and had sailed to an area about 90 miles southeast of the Italian island of Lampedusa.

It can carry a maximum of 120 passengers.

Banksy posted a promotional video on his official Instagram page, with the words “Like most people who make it in the art world, I bought a yacht to cruise the Med” overlaid with pictures of Louise Michel and migrants in distress.

“It’s a French navy vessel we converted into a lifeboat because EU authorities deliberately ignore distress calls from ‘non-Europeans’,” the video continued.

The ship’s launch on 18 August was kept secret and news of the mission has only been released following its first rescue.

While it is fairly small, the yacht has a top speed of 27 knots and so is considerably faster than other NGO rescue vessels.

The crew managed to keep #LouiseMichel stable for almost 12h now. Our new friends told us they lost 3 friends on their journey already. Including the dead body in our one life raft, that makes 4 lives vanished because of Fortress Europe… And we are still waiting. pic.twitter.com/Te2PKCv2Gn

On Wednesday, 45 people – including five children – died when the engine on their boat exploded off Libya, in the country’s deadliest shipwreck this year.

Over 7,600 migrants have been discovered at sea and returned to Libya so far this year, according to figures from the International Organisation for Migration.