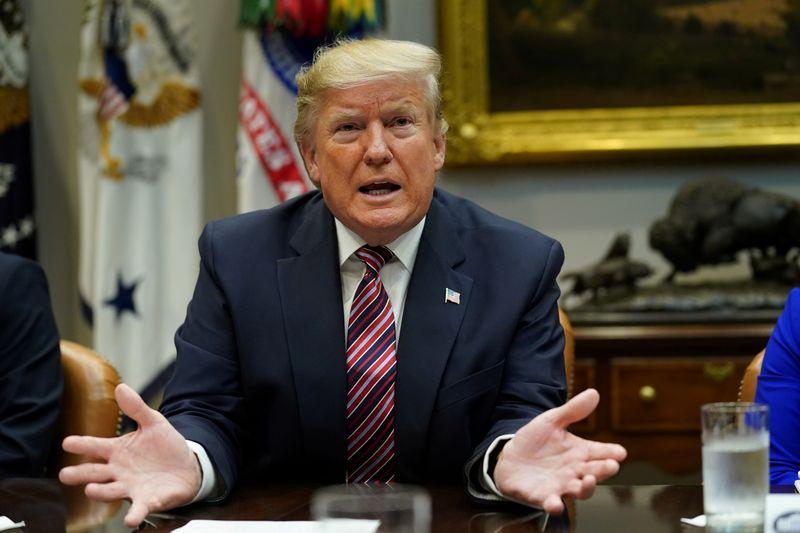 WASHINGTON (Reuters) – President Donald Trump said on Friday he has directed his environmental regulators to find answers to what he considers a big problem – water-conserving showers, faucets and toilets that restrict their flow to a dribble.

President Donald Trump speaks to reporters while participating in a “roundtable on small business and red tape reduction accomplishments” in the Roosevelt Room at the White House in Washington, U.S. December 6, 2019. REUTERS/Kevin Lamarque

“We have a situation where we’re looking very strongly at sinks and showers and other elements of bathrooms … where … you don’t get any water,” Trump told a meeting of small business leaders at the White House in a complaint about low-water flow.

He said the Environmental Protection Agency was looking “very strongly at my suggestion.”

The fixtures “end up using more water,” Trump told the roundtable where U.S. officials also reviewed his agenda of slashing regulations to spur business. “People are flushing toilets 10 times, 15 times, as opposed to once.”

The EPA did not immediately respond to a request for comment.

Due to concerns about shrinking U.S. water supplies, the federal government has regulated faucet and showerhead water flow since at least 1994, when Democrat Bill Clinton was president.

Apparently Trump’s view does not agree with the EPA.

The EPA sponsors WaterSense, a voluntary partnership program that provides labels for water-efficient showerheads and other products and resources for helping Americans save water.

The EPA’s website says that saving every drop counts because “water managers in at least 40 states expect local, statewide, or regional water shortages to occur over the next several years.”

It was not the first time that Trump has shared his views on water issues. In September, his EPA accused California’s cities of violating clean water laws by allowing human waste from homeless residents to enter waterways.

San Francisco Mayor London Breed accused Trump of “taking swipes” at her city for “no reason other than politics.” It was the latest clash between the Republican president and Democratic officials in the state.

Also in September, Trump’s EPA repealed the 2015 Waters of the United States rule that had expanded protections for wetlands and shallow streams, but farmers, miners and manufacturers decried as overreach.

Water-sipping fixtures could be a good idea in desert regions, Trump told the meeting. “But for the most part, you have many states where they have so much water that it comes down. It’s called rain. They don’t know what to do with it,” Trump said.