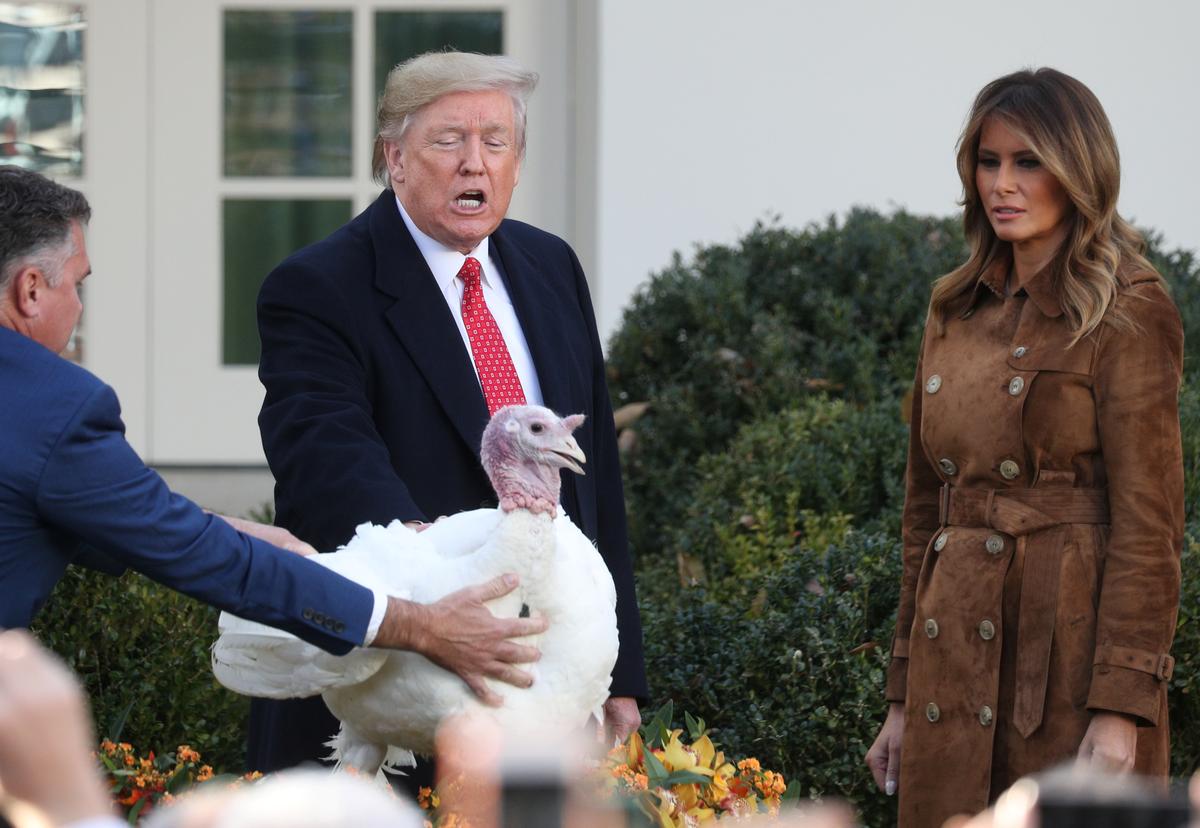 WASHINGTON (Reuters) – President Donald Trump on Tuesday used the high power of his office to pardon “Butter,” a 47 pound (21 kg) turkey, during a U.S. tradition at the White House where he also cracked jokes about Democrats’ investigation into whether he should be impeached.

U.S. President Donald Trump pardons one of the 72nd National Thanksgiving Turkeys as Wellie Jackson, who raised the turkey, holds onto it and first lady Melania Trump looks on during ceremonies in the Rose Garden at the White House in Washington, U.S., November 26, 2019. REUTERS/Loren Elliott

Both Butter and his alternate “Bread” escaped the fate of becoming the main course of a Thanksgiving feast and were sent to a special reserve in Virginia.

Standing at a podium in the Rose Garden, Trump said the birds had been raised to remain calm under “any condition.”

“Which will be very important because they’ve already received subpoenas to appear in Adam Schiff’s basement on Thursday,” he joked, referring to the House of Representatives intelligence committee chairman who has led the inquiry into whether Trump should be impeached for pressing Ukraine to investigate a political rival of his.

“It seems the Democrats are accusing me of being too soft on turkey. But Bread and Butter, I should note, that, unlike previous witnesses, you and I have actually met.”

While other presidents occasionally gave turkeys commutations starting with Abraham Lincoln, another Republican president, George H. W. Bush, was the first to make sparing one an official act, according to the non-profit Constitution Center. Trump’s predecessor, Democrat Barack Obama, is credited with starting the tradition of cracking “dad jokes” at the pardon.

The threat of impeachment may be looming larger each day, with Democrats expected to release a crucial report after Thanksgiving, but it did not stop the White House from reveling this week in the somewhat goofy pardoning tradition.

It posted videos of the turkeys checking into a special suite at the Willard Hotel, where political leaders have stayed in the past, and baseball card-like statistics on both Bread and Butter.

The National Turkey Federation introduced the birds in a press conference on Tuesday. In true Washington fashion, polling decided which turkey would receive the official pardon, with Americans sharing their preference for Butter on Twitter.

According to the White House, Butter enjoys listening to bagpipes and has a gobble style that is “rowdy.” Bread prefers Bluegrass music and wants to master aerial yoga.