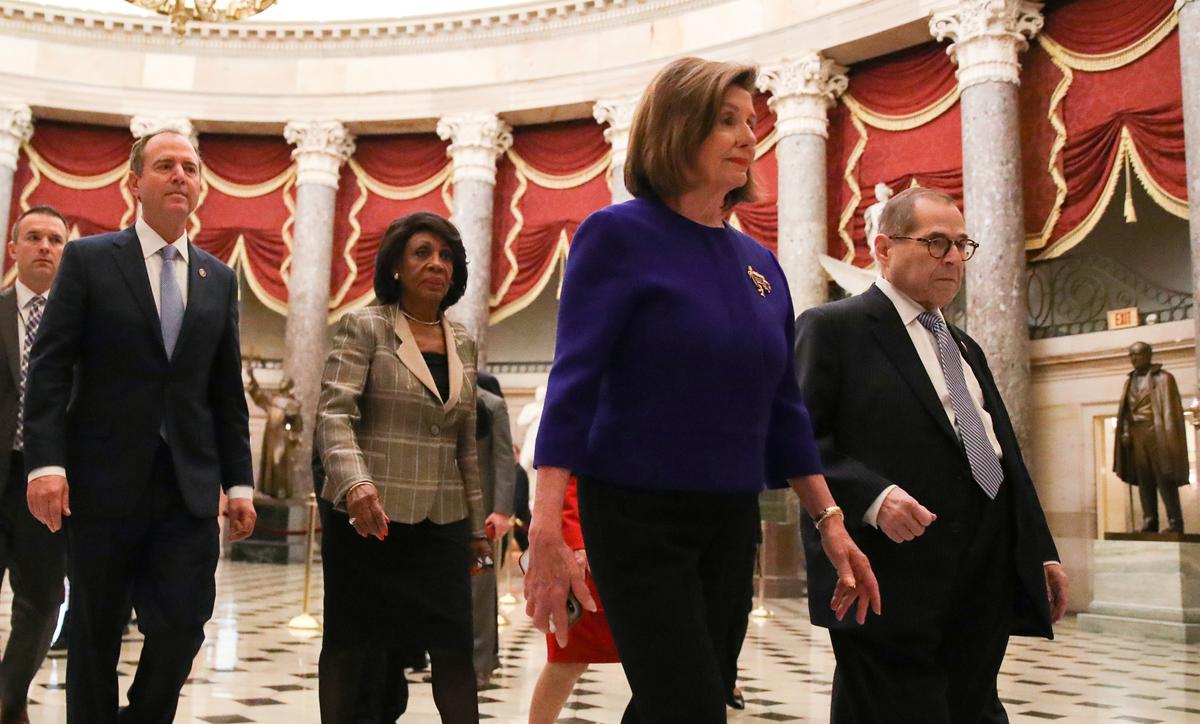 WASHINGTON (Reuters) – Democrats in the U.S. House of Representatives announced impeachment charges against President Donald Trump on Tuesday, making him the fourth president in U.S. history to face a formal effort to remove him from office.

The Democratic-controlled House is almost certain to vote to impeach the president as soon as next week, setting up a trial in the Republican-led Senate early next year, shortly before the presidential election kicks off with primaries in Iowa and New Hampshire.

The effort to force Trump out of the White House faces long odds of success. At least 20 Senate Republicans would have to vote to remove him from office, and none so far have indicated they are considering such a move.

The Senate may opt to forego a full trial and instead hold its vote after House Democrats and Trump’s defenders make their opening statements, Republican Senate Leader Mitch McConnell said at a news conference. That may go against the wishes of Trump, who wants to call his own witnesses.

The impeachment charges accuse Trump of “betraying” the country by abusing power in an effort to pressure Ukraine to probe a political rival and then obstructing Congress’ investigation into the scandal.

House Judiciary Committee Chairman Jerrold Nadler told reporters that Democrats had to take action because Trump had endangered the U.S. Constitution, jeopardized national security and undermined the integrity of the 2020 election.

“No one, not even the president, is above the law,” Nadler said at a news conference. His panel could take up the charges as soon as Wednesday ahead of the full House vote.

White House spokeswoman Stephanie Grisham accused Democrats of engaging in a “baseless and partisan” attempt to undo his surprise victory in the 2016 election.

He is the fourth U.S. president to face impeachment.

Democrats have moved rapidly since launching their inquiry in late September after a whistleblower complaint about a July 25 telephone call in which Trump sought help from Ukrainian President Volodymyr Zelenskiy to investigate former Vice President Joe Biden, a leading contender in the Democratic race to challenge Trump in next November’s election.

The abuse of power charge accuses Trump of using nearly $400 million in U.S. security aid and a possible White House meeting with his Ukrainian counterpart to solicit Ukraine to publicly announce the investigations of Biden and a debunked theory that Ukraine, not Russia, interfered in the 2016 U.S. election.

The obstruction charge accuses the president of defying and impeding the House’s efforts to investigate the scandal, adding that Trump would remain a threat to the U.S. Constitution if he remained in office.

Republicans argue Trump did nothing improper in his call with Zelenskiy and say there is no direct evidence he withheld aid or a White House meeting in exchange for a favor.

Top Democrats initially had been reluctant to pursue Trump’s impeachment out of concerns that it could inspire a voter backlash in 2020.

According to Reuters/Ipsos polling, 44 percent of Americans support impeachment, with 42 percent opposed. Roughly three out of four Democrats support the effort, while fewer than one in 10 Republicans back it.

Nadler and other Democrats involved in the effort opted to focus solely on Trump’s dealings with Ukraine, rather than the president’s efforts to impede Special Counsel Robert Mueller’s investigation into Russia’s involvement in the 2016 election, or other controversial aspects of his tenure. They say the two articles reflect Trump’s worst offenses and have the broadest support.

The two impeachment articles are bundled into a single resolution, which minimizes the risk of either of them failing on their own. During the Clinton impeachment, the House voted separately on four articles and two of them failed, including one on abuse of power.

“Future Congresses will inevitably make impeachment a political tool to be used anytime a President of the opposing party occupies the White House,” he said in a statement.

Representative Adam Schiff, the Democrat who spearheaded the investigation in the House Intelligence Committee, said Trump had given Democrats no choice.

“The evidence of the president’s misconduct is overwhelming and uncontested,” Schiff said.

The White House has refused to participate in the impeachment inquiry so far, but is expected to mount a vigorous defense in the Senate. It is unclear whether Trump himself will testify, but he refused to sit for an interview during Mueller’s investigation.

Senate Leader McConnell complained that the process had crowded out work on other matters.

Congress is set to consider a rush of bipartisan legislation in the coming weeks, including legislation that upgrades military housing and establishes three months of family leave for federal workers. House lawmakers may approve a new trade deal between the United States, Canada and Mexico, which the Senate will not take up before the holidays.

Congress also must tackle legislation to fund the government through next September, which is due to expire on Dec. 20.