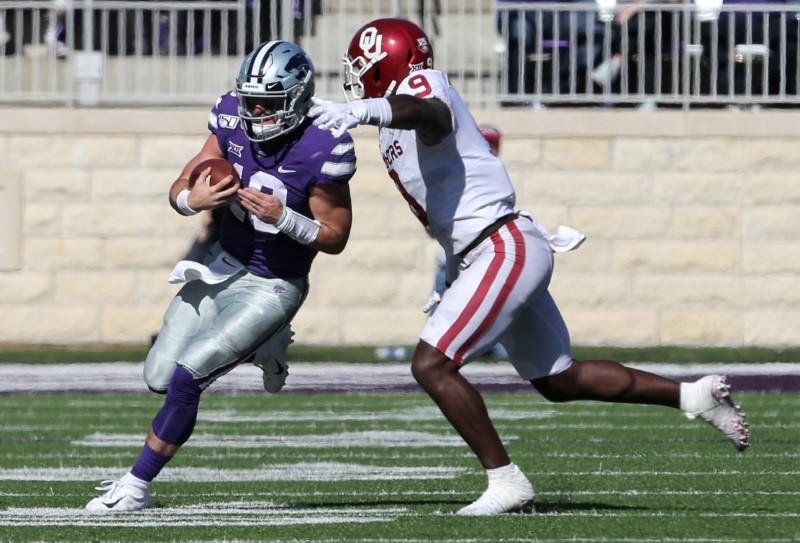 Quarterback Skylar Thompson rushed for four touchdowns and Kansas State survived a late Oklahoma rally to defeat the No. 5 Sooners 48-41 on Saturday in Manhattan, Kan.

It was the Wildcats’ first win over an AP top-five team since defeating No. 4 Texas in 2006 and came in the 100th all-time meeting between the schools. The loss ended the Sooners’ 22-game winning streak in true road games.

Trailing by 25 points early in the fourth quarter, Oklahoma made a furious comeback attempt, scoring 18 unanswered points. But the Sooners couldn’t recover an onside kick attempt with 1:45 left, and the Wildcats ran out the clock.

Oklahoma QB Jalen Hurts was 19-of-26 passing for 395 yards and a touchdown, and he added 96 yards and three touchdowns on the ground.

Joe Burrow passed for one touchdown and ran for another as LSU passed its stiffest test of the season, holding off Auburn in Baton Rouge, La., to remain unbeaten.

LSU had its lowest-scoring game of the season, but Burrow was still outstanding. He completed 32 of 42 passes for 321 yards, including a 20-yard touchdown pass to Terrace Marshall Jr., and he later ran for a 7-yard touchdown that proved to be the difference in the game.

Clyde Edwards-Helaire rushed for 136 yards, including a 6-yard touchdown run, as LSU (8-0, 4-0 SEC) overcame its first second-half deficit of the season. D.J. Williams rushed for 130 yards for Auburn (6-2, 3-2), which lost for the second time in three games. Quarterback Bo Nix completed just 15 of 35 passes for 157 yards with a touchdown and an interception.

J.K. Dobbins shredded the nation’s best rushing defense for 163 yards and two touchdowns on 20 carries and Chase Young tied a school record with four sacks as the Buckeyes defeated the Badgers at soggy Ohio Stadium in Columbus.

Dobbins added a 14-yard TD on the ground early in the fourth quarter. He had 221 total yards, including three catches for 58 yards.

Clifford finished 18-for-32 for 189 yards, the four scores and an interception to lead Penn State (8-0, 5-0 Big Ten), which had lost five of six in the series, including the last two. Freiermuth had five catches for 60 yards, while sophomore KJ Hamler had five receptions for 57 yards, including a 27-yard touchdown in the second quarter.

Michigan State (4-4, 2-3) has lost three straight, all against top-10 opponents. Freshman Anthony Williams had the lone score for the Spartans, scoring on a 4-yard run in the third quarter.

Max Duggan passed for a career-high 273 yards and two touchdowns and the Horned Frogs intercepted Sam Ehlinger four times to hold off the Longhorns in Fort Worth, Texas.

TCU (4-3, 2-2 Big 12) took a 27-20 lead with a 44-yard touchdown pass from Duggan to Jalen Reagor early in the fourth quarter on the play immediately after Ehlinger’s second pick. Jonathan Song booted a 33-yard field goal after Ehlinger’s third interception to expand the Horned Frogs’ lead to 30-20.

Ehlinger passed for 321 yards and two scores, but his four interceptions were one more than his total in the first seven games for Texas (5-3, 3-2). Devin Duvernay caught eight passes for 173 yards and a TD to lead the Longhorns.

Tanner Morgan threw two touchdowns and Seth Green rushed for two more as the Golden Gophers coasted to a victory over the Terrapins in Minneapolis.

Rodney Smith rushed for 103 yards and a touchdown for the Golden Gophers, whose 8-0 start is their first since winning the national title in 1941. The lopsided victory improved Minnesota to 5-0 in the Big Ten for the first time since 1961.

Tayon Fleet-Davis reeled in a 59-yard touchdown pass from Tyler DeSue for Maryland (3-5, 1-4), which was outgained 498-210 in total yards while sustaining its third straight loss and fifth in six games.

The Hawkeyes posted their second shutout of the season by limiting the Wildcats to 202 yards of offense in Evanston, Ill.

Mekhi Sargent’s 1-yard run with 5:23 left in the third quarter made it 17-0, polishing off a 13-play, 59-yard drive. Keith Duncan completed the scoring with a 28-yard field goal at the 9:58 mark of the fourth quarter, capping a nine-play, 61-yard possession.

Marcus Williams Jr. and Raykwon Anderson powered the Mountaineers’ rushing attack and the defense dominated the Jaguars in Mobile, Ala. Appalachian State (7-0, 4-0 Sun Belt) extended its winning streak to 13 games and held South Alabama (1-7, 0-4) to just 139 yards of offense.

Williams rushed for 94 yards and a touchdown and Anderson added 99 yards on just four late carries, including a 67-yard touchdown run with 4:48 to go. The Mountaineers outgained the Jaguars 313-87 on the ground and pitched a shutout until Frankie Onate’s 37-yard field goal with 5:43 to play.

Tra Minter rushed for 94 yards for South Alabama with 64 coming in the second half, but quarterbacks Cephus Johnson and Desmond Trotter were a combined 6 of 19 passing for 52 yards.

Malcolm Rodriguez returned an interception 26 yards for the game-winning score midway through the fourth quarter as the Cowboys upset the Cyclones in Ames, Iowa.

With the Big 12 contest tied 27-27, the defensive back stepped in front of a Brock Purdy pass and dashed in untouched for the touchdown with 6:47 to play, after the host Cyclones rallied from a 21-10 deficit to even the score in the fourth quarter.

Quarterback Spencer Sanders was 16 of 24 for 249 yards, two scores and an interception, and Tylan Wallace caught eight passes for 131 yards and a score for the Cowboys (5-3, 2-3). Chuba Hubbard, the nation’s leading rusher, gained 126 yards on 22 carries with a long TD run.

Prepare to study in Canada
Study permit: Who can apply
US Plans to Lift Covid Emergency Declarations May 2023
Canadian Passport’s Power Gains One Point On Index
What You Should Know About Targeted Express Entry Draws in 2023
Aircraft Assemblers Can Now Immigrate To Canada Through Express Entry
Ontario Targets 53 Tech and Health Occupations In New PNP Draw