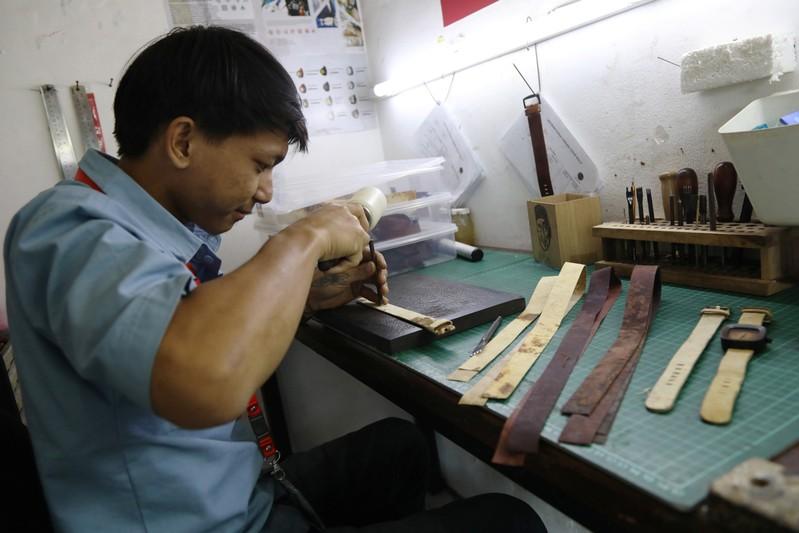 BANDUNG, Indonesia (Reuters) – A watchmaker in Indonesia’s Bandung city thinks the next step in sustainability is a wristwatch with a strap made out of the complex root structure of a mushroom.

A worker prepares mycelium leather to be used for wristwatches at a workshop of Pala Nusantara, a watchmaking company, in Bandung, West Java province, Indonesia, October 14, 2019. REUTERS/Irene Barlian

Mycelium leather, as the material is known, is fibrous and tough yet pliable and waterproof, and has been touted as an environmentally-friendly alternative to synthetic products or natural leather made from animal hide.

Erlambang Ajidarma, head of research at Mycotech, the start-up supplying the mycelium leather to make the wrist straps, said his team was inspired by tempeh, a traditional Indonesian savory dish made by fermenting soybeans with fungus.

“Finally we found one mushroom with a mycelium that can be made into binding material,” said Ajidarma, after testing several different types of mushrooms since 2016.

Now, the company grows the fungus on sawdust and then harvests the leather. After scraping off the sawdust, it is dried and then cut to various sizes, depending on the use.

The process is tedious, taking around three weeks to make 10 square meters of material. But Ajidarma thinks it’s worth it.

It costs less to make mycelium leather than to make petroleum-based synthetic leathers, he says, and the mycelium manufacturing process produces a fraction of the carbon dioxide emitted by the cows killed to make real leather.

Ajidarma’s team also uses dyes extracted from leaves, roots and food waste to color the mycelium leather, which they say absorbs dye faster than leather made from animal hide.

Watchmaking company Pala Nusantara cuts and sews the leather into the straps for its watches, which are made with a wooden bezel.

“I would be very interested in a watch made of natural material and plants because I’ve been allergic to a few that I bought in the past,” said Nurcholis Irvan, a customer at a watch shop in Jakarta.