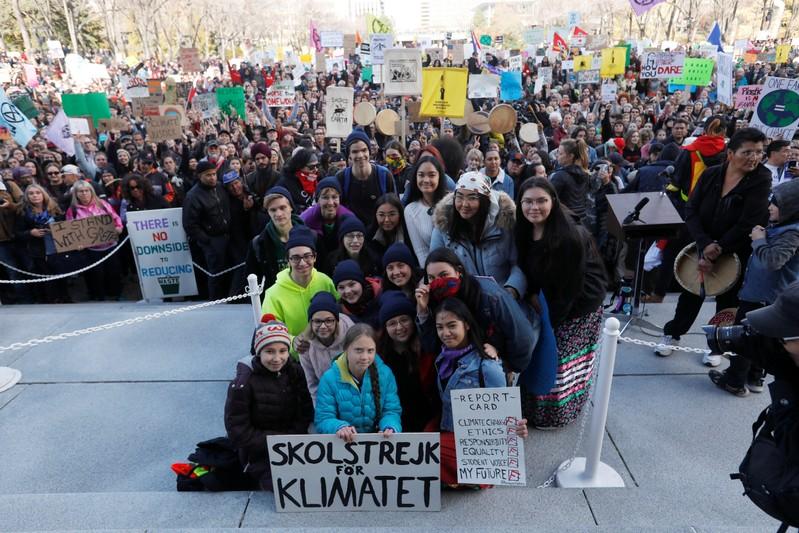 A crowd of several thousand led by indigenous drummers with students, young people and families marched slowly from a downtown intersection toward the Alberta legislature building. Many held banners and signs with slogans including “be a better ancestor”. Police rode on bicycles at the front and back of the throng.

At the same time, the honking horns of big rig trucks blared from a nearby thoroughfare, where vehicles emblazoned with “We love Canada energy” signs were driving up and down.

“I came out to show support for Greta and everyone fighting against the climate crisis,” said protester Bridget Gutteridge-Hingston, 13, who marched with her father.

“It’s something I’m definitely scared of,” she said.

The truck convoy organized by pro-oil group United We Roll drove from the city of Red Deer to Edmonton Friday morning to protest against what the group called foreign activists campaigning against Canada’s oil and gas industry.

“Richer countries such as Canada and Sweden need to get down to zero emissions much faster so people in poorer countries can heighten their standard of living by building the infrastructure we have already built,” Thunberg told a cheering crowd, which organizers estimated was 10,000-strong, from the steps of the Alberta legislature building.

The truck horns sounded in the distance throughout Thunberg’s speech and there were around 150 counter-protesters in the crowd. After she left the stage shouting broke out between pro-energy demonstrators, armed with a noisy bull horn and yelling “We need oil and gas”, and climate marchers.

Alberta is home to Canada’s vast oil sands and holds the world’s third-largest crude reserves, but has struggled to recover from the 2014-15 global oil price crash because of delays building new export pipelines as a result of environmental opposition and regulatory hold-ups.

Many energy sector workers and the Alberta government feel the oil sands, scorned by environmentalists for their high carbon emissions intensity, have been unfairly targeted and say the sector is making progress cutting greenhouse gas output.

A 2018 study by Stanford University researchers ranked the Canadian oil industry’s upstream emissions as the fourth most carbon-heavy in the world.

The energy sector provides 150,000 direct jobs in Alberta and contributes more than C$71 billion ($54.1 billion) annually to the gross domestic product of Canada, the world’s fourth-largest oil and gas producer.

Thunberg has mobilized a global youth movement against climate change. Alberta Premier Jason Kenney said he hoped she would take a “fair and objective look” at Alberta’s energy sector.

Friday’s march, organized by indigenous and environmental groups, came as Canada prepares for a tight federal election Monday in which climate change and the future of the oil and gas sector are hot topics.