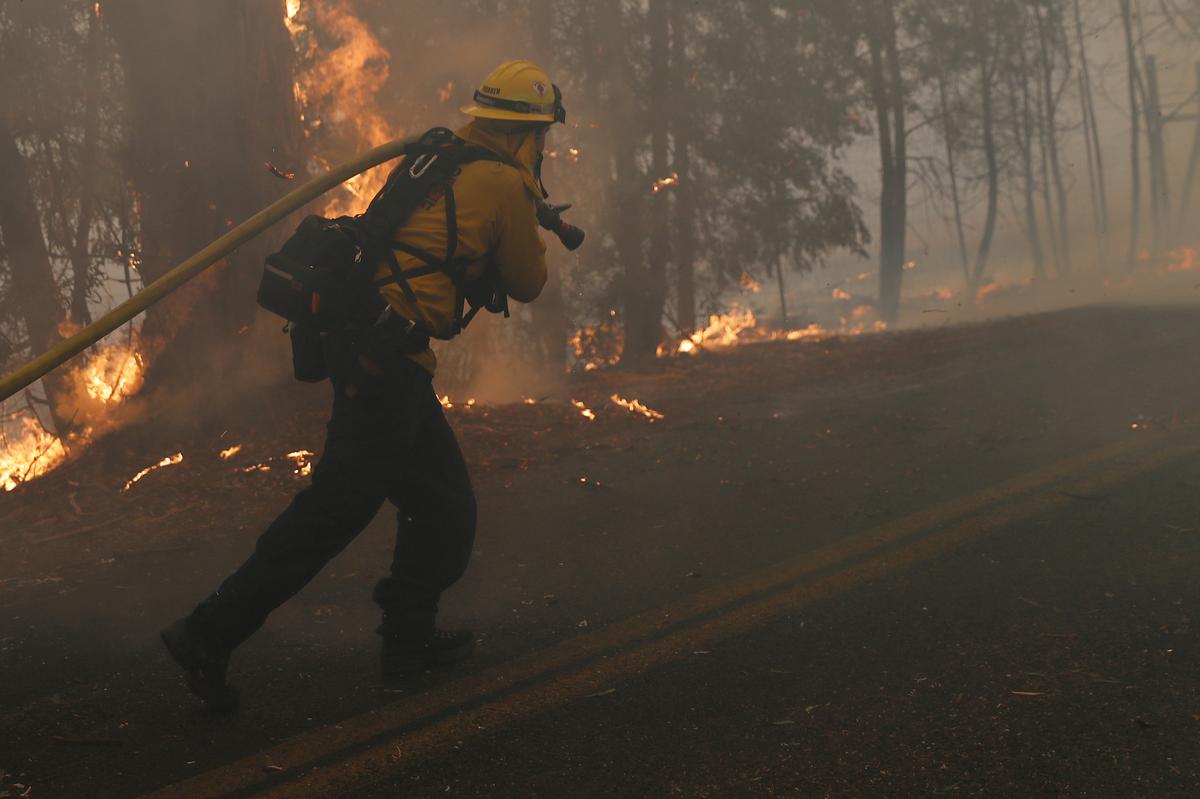 (Reuters) – Thousands of people in Los Angeles were ordered to evacuate after a fast-moving brush fire ignited early on Monday morning near the Getty Center museum, the latest outbreak in a wildfire season that has caused disruption at both ends of California.

A firefighter pulls a hose along Chalk Hill Road as he battles the wind-driven Kincade Fire in Windsor, California, U.S. October 27, 2019. REUTERS/Stephen Lam

The fire broke out shortly after 2:30 a.m. (0930 GMT) and has since grown to consume more than 400 acres in the hills around Interstate 405, near some of the city’s most expensive homes.

At least two structures in the area were on fire, but there were no reported injuries, Los Angeles Fire Department Captain Erik Scott told reporters.

About 3,300 homes are in the mandatory evacuation area, including that of Los Angeles Lakers star LeBron James. He said he had been driving around before dawn with his family looking for shelter after being forced to flee.

“Finally found a place to accommodate us!” he wrote on Twitter. “Crazy night man!”

Officials at the Getty said the fire was burning to the north of the museum, which was designed with thick stone walls to prevent fire from damaging its treasures.

The fierce winds fanning wildfires elsewhere in the state, including a large fire consuming parts of the picturesque wine country north of San Francisco, were expected to abate on Monday.

But forecasters with the National Weather Service said high winds would return later in the week and could be the strongest so far this year in the south of the state.

Marc Chenard, a forecaster with the NWS’s Weather Prediction Center, said wind gusts in northern California would abate by midday and in the south of the state by later in the afternoon.

“But late Tuesday through Thursday, the winds are back and in some areas can be more extreme than before,” he said. “We have the potential for the strongest Santa Ana (southern) winds of the year.”

The northern California wine country has borne the brunt of the fires, with 84 square miles (218 sq km) burned and 190,000 people evacuated in the so-called Kincade fire.

Only about 5% of that fire was contained early on Monday after crews lost ground against the wind-driven wildfire a day earlier.

About 3,000 people were battling the Kincade Fire, the worst of more than a dozen major blazes that have damaged or destroyed nearly 400 structures and prompted Governor Gavin Newsom to declare a statewide emergency.

“All hands are focusing on the Kincade,” Newsom told reporters after meeting residents at an evacuation center in the Sonoma County city of Petaluma, calling the blaze “the most stubborn challenge we face.”

Investigators have not yet said what they believed caused the blaze, although it ignited near a broken wire on a Pacific Gas & Electric (PCG.N) transmission tower.

More than a million homes and businesses were without power on Monday morning. Most of the those were from planned outages: High-wind forecasts had prompted PG&E to shut off power to 940,000 customers in 43 counties on Saturday night to guard against the risk of touching off wildfires.

But PG&E expects to issue a weather “All Clear” for safety inspections and restoration work to begin early Monday morning for the northern Sierras and North Coast, the company announced early Monday.

The governor has been sharply critical of PG&E, saying corporate greed and mismanagement kept it from upgrading its infrastructure while wildfire hazards have steadily worsened over the past decade.

PG&E filed for bankruptcy in January citing billions of dollars in civil liabilities from deadly wildfires sparked by its equipment in 2017 and 2018.

Newsom said crews had largely “gotten their arms around” the Tick Fire near the city of Santa Clarita, some 35 miles north of downtown Los Angeles, which has charred 4,615 acres (1,868 hectares) and destroyed 22 structures since Thursday.

Most of the more than 40,000 residents ordered to evacuate were allowed to return home by Saturday afternoon, the county fire department said.

Prepare to study in Canada
Study permit: Who can apply
Here Are The Top 15 Jobs In Canada For 2023
Bus Drivers Can Now Immigrate To Canada Through Express Entry
Alberta To Give PNP Preference To Immigrants With Family In Province
Express Entry Now Allows Estheticians To Immigrate To Canada
Canada Governments Urged To Encourage Immigration To Smaller Communities