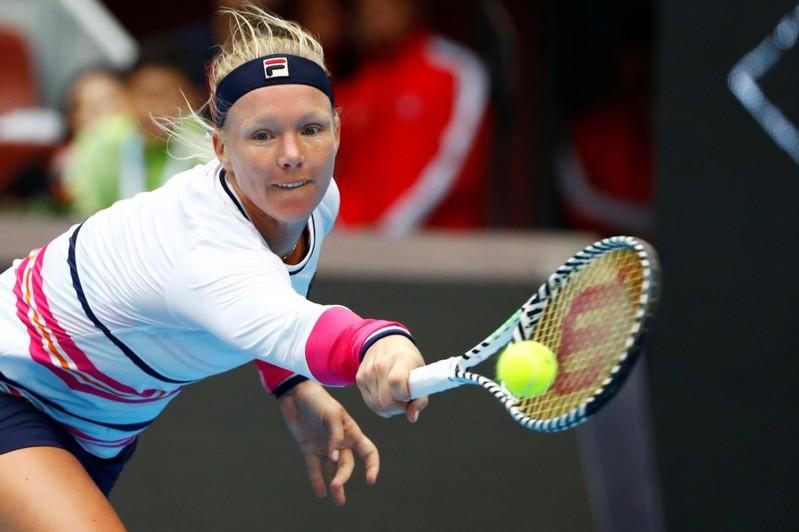 (Reuters) – Dutch top seed Kiki Bertens clawed her way back from a set down to beat China’s Zheng Saisai 2-6 6-3 6-4 on Saturday and advance to the final of the WTA Elite Trophy in Zhuhai, China.

World number 10 Bertens, having dropped her first set in the tournament and gone a break down in the second, stormed back into the contest by winning nine of the next 11 games to turn the tables on the local favorite and take a 4-1 lead in the decider.

With home support well and truly behind her, the Chinese wildcard did manage to battle back to 4-4 Bertens wrapped up the marathon encounter in two-and-a-half hours.

“I like it more, to be honest, when the crowd is against me than for me,” Bertens told reporters. “I think that just gives me a little bit more energy and a feeling that I really want to win.

“(I’m feeling) exhausted. I was really, really tired before the match… a little bit of cramping here and there. But we prepare as good as we can for tomorrow. Hopefully I’ll have one more final push and just give all the energy that’s left in me.”

Bertens faces Belarusian Aryna Sabalenka, who came back from a break down in both sets to beat the Czech Republic’s Karolina Muchova 7-5 7-6(4) in the second semi-final.

Fourth seed Sabalenka, who has won three of her four singles titles in China, was made to save a set point on serve in the second set before sealing her spot in the final in the ensuing tiebreak.

Sunday’s final will be Sabalenka’s ninth of her career and fourth this season.

Reporting by Rohith Nair in Bengaluru; editing by Tony Lawrence

Prepare to study in Canada
Study permit: Who can apply
Canada Governments Urged To Encourage Immigration To Smaller Communities
Express Entry Now Allows Estheticians To Immigrate To Canada
What You Should Know About Targeted Express Entry Draws in 2023
Manitoba PNP Draw: Province Invites 336 Canada Immigration Candidates
Here Are The Top 15 Jobs In Canada For 2023