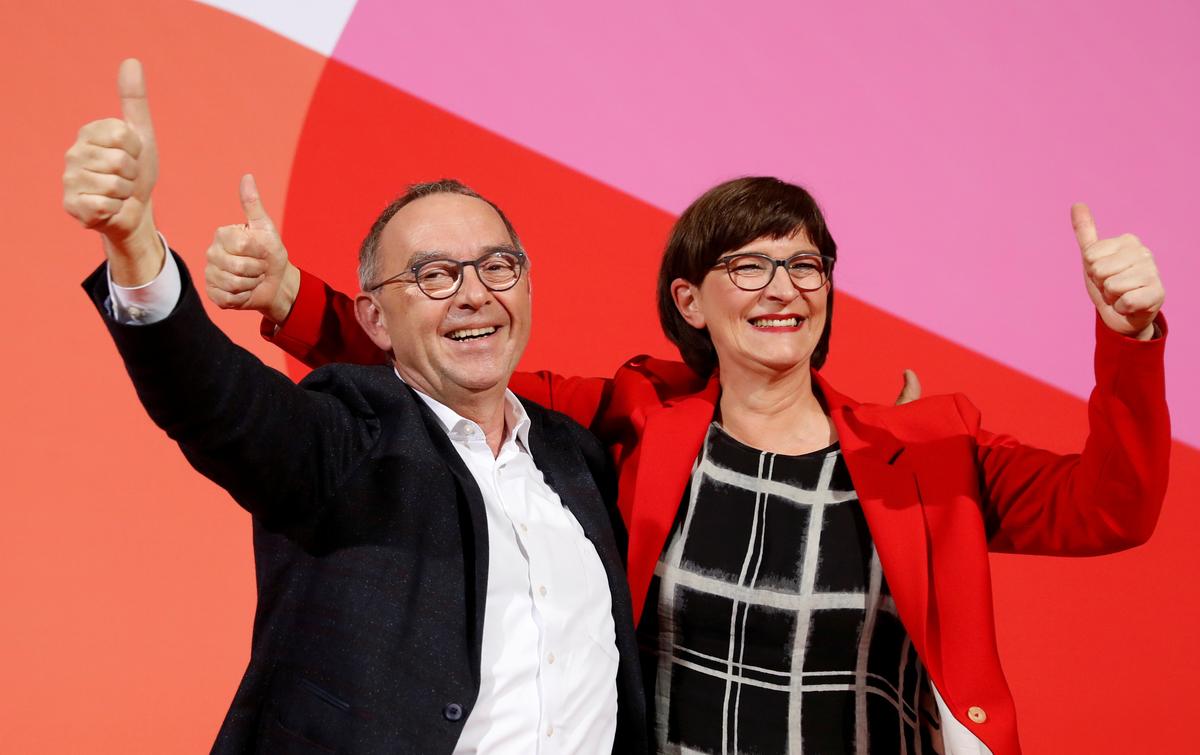 BERLIN (Reuters) – The future of Germany’s ruling coalition looked shaky after the election of new leaders of the Social Democrats (SPD) who are demanding a shift in policies, and several senior conservatives on Sunday ruled out talks to renegotiate a governing agreement.

Two strong leftist critics of the coalition with Chancellor Angela Merkel’s conservatives – Norbert Walter-Borjans and Saskia Esken – won a vote for leadership of the Social Democrats on Saturday, possibly putting the country, Europe’s largest economy, at a political crossroads.

Their ascendancy raises the chances of an early election or a minority government if the SPD leaves the coalition, which could trigger political instability at a time when the far-right Alternative for Germany (AfD) has become the country’s third-largest party.

Walter-Borjans and Esken, who ran on a joint ticket, want to renegotiate the coalition deal to focus more on social justice, investment and climate policies, setting them on collision with Chancellor Angela Merkel’s Christian Democrats (CDU).

Speaking on public broadcaster ARD on Sunday, Walter-Borjans said raising investments and scratching temporary job contracts were issues that needed to be addressed.

“If the coalition partner then takes an obstructive approach for these new tasks then you have to make a decision that it cannot continue,” he said.

Asked whether there was movement on the issues that the new SPD leadership wants to change in a new agreement, Laschet said: “There is no such thing.”

Walter-Borjans and Esken beat Finance Minister Olaf Scholz and Klara Geywitz, who said they would support their rivals. SPD delegates are set to approve the leadership – elected via a party ballot that ended Saturday – at a party conference starting on Dec. 6. They will also vote on the coalition.

In the latest sign that established party tie-ups are being tested, a three-way coalition consisting of CDU, SPD and the Greens agreed on Sunday on a government deal in Saxony, where the AfD came in second in a September election.

SPD members expect that the new leadership duo will not recommend leaving the coalition but rather will seek more concessions from the CDU, including dropping the target for a balanced budget and raising the minimum wage.

Economy Minister Peter Altmaier, a CDU member, said giving up the balanced budget would be an additional burden for future generations, telling daily Handelsblatt that it had been one of the CDU’s key promises during the election campaign.

Laschet said new demands were a problem of the SPD duo, not of the Christian Democrats, saying holding fresh elections would be irresponsible in the current environment.

Conservative Agriculture Minister Julia Kloeckner also said there was no chance of renegotiations, adding the CDU would stick to the promises it made. CDU deputy leader Thomas Strobl made similar comments.

Merkel, 65, has been in power since 2005 and has said she will not seek re-election at the next national election, due in 2021. The CDU is trying to boost its image and appeal to hold its position as the leading governing party after she goes.

Striking a slightly more conciliatory tone, the head of the CDU and Merkel’s would-be successor as chancellor, Annegret Kramp-Karrenbauer, urged the Social Democrats to remain part of the government, adding the current coalition agreement provided the basis to move forward.