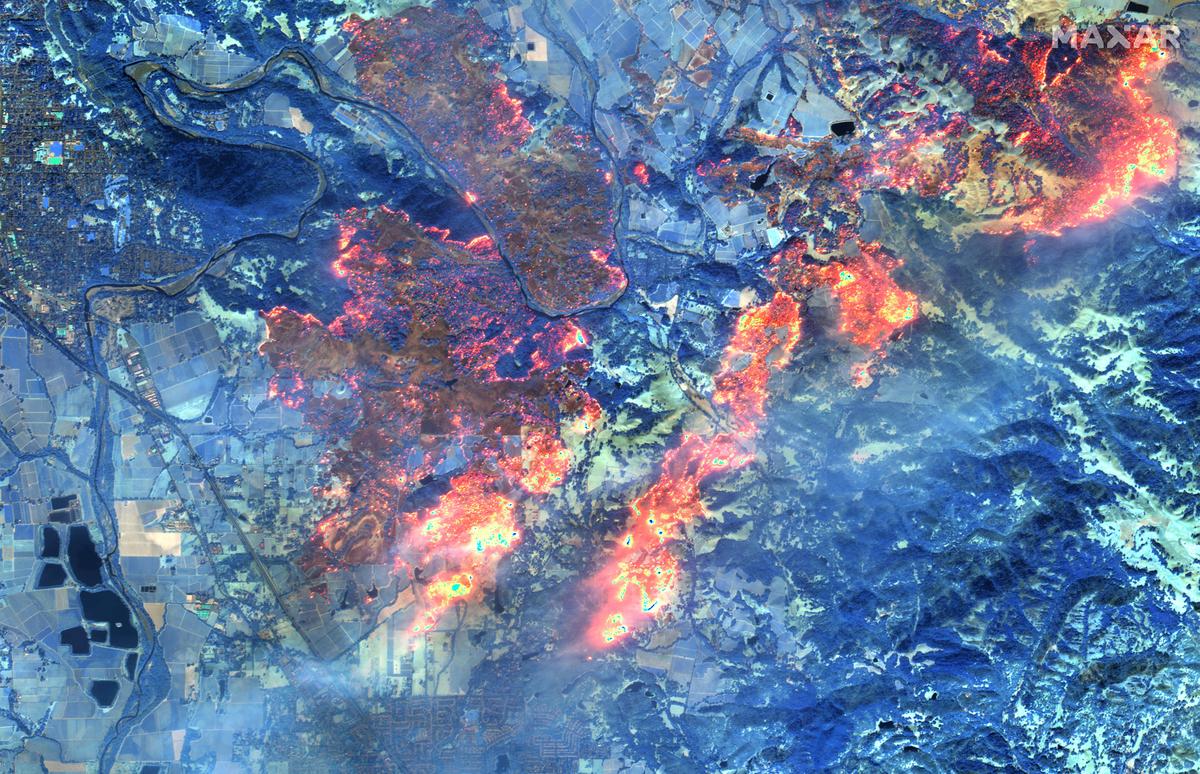 The most destructive among several new wind-driven blazes in the region erupted hours before dawn on the rugged slopes of the San Bernardino National Forest above the city of San Bernardino, roaring downhill into the north end of town.

As of early afternoon, crews had managed to carve containment lines around 50% of the fire’s perimeter. No injuries were reported, but evacuation orders remained in effect for nearly 500 homes, displacing about 1,300 residents.

The cause of the blaze is still under investigation. The San Bernardino County Fire Department said on Twitter that no power lines were located where it had originated.

The latest recurrence of Santa Ana winds, howling into the region through mountain passes from the desert, coincided with extremely low relative humidity and a prolonged lack of rainfall that has left vegetation tinder-dry across the region.

Winds were beginning to subside on Thursday, though red-flag warnings were extended through Friday evening in mountain and foothill areas deemed especially susceptible to high gusts.

The latest Santa Anas cap a flurry of extreme windstorms across California during the past month, but once they dissipate no more were forecast for at least the next week, Weather Service meteorologist Kristen Stewart said.

The easing winds helped firefighters make short work of numerous blazes that sprung up early Thursday, and to consolidate gains against a pair of major fires ignited earlier in the week.

A fire that erupted early on Monday near the famed Getty Center art museum in west Los Angeles, threatening thousands of homes in some of the city’s wealthiest neighborhoods, was largely suppressed by Thursday, with containment listed at 40%.

Residents were allowed to return to most of the 10,000 homes that had been ordered evacuated.

The museum emerged unscathed, but about a dozen dwellings were lost in the 745-acre Getty fire and two firefighters were injured.

Investigators say the Getty fire was likely caused by a broken tree branch blown into power lines by high winds.

He added that utilities should be burying more of their power lines underground to prevent such calamities.

“You should not have a fire that starts with a branch that falls into wires, and then 12 houses are burned down and 17,000 people have to evacuate,” said Dobrowolski.

About 30 miles (48 km) to the northwest, a fire that raged to the edge of the hilltop Ronald Reagan Presidential Library in Ventura County’s Simi Valley on Wednesday was 10% contained on Thursday after threatening thousands of homes.

Some 26,000 residents were ordered to flee at the height of that blaze, dubbed the Easy fire, along with an unknown number of horses and other livestock in an area dotted with ranch properties. Firefighters managed to keep flames from damaging the Reagan Library compound.

High winds also left thousands of people in the region without electricity, either from downed power lines or from utilities selectively shutting off power to reduce the risk of wildfires being sparked by damaged wires.

Pacific Gas and Electric Co (PCG.N) acknowledged last week that the Kincade fire, a blaze that charred 77,000 acres of Sonoma County wine country north of San Francisco, started last week near a damaged PG&E transmission tower at about the time a high-voltage line on that tower malfunctioned.

That blaze has destroyed at least 266 homes and other structures, but was listed as 60% contained on Thursday.

Wind damage to power lines was not the only fire-causing culprit. A 300-acre blaze in Riverside County, east of Los Angeles, ignited when a high-speed police pursuit of a stolen vehicle ended in the crash of the suspect’s car early on Thursday, authorities said.

Prepare to study in Canada
Study permit: Who can apply
Here Are The Top 15 Jobs In Canada For 2023
Ontario Masters Graduate Draw: Province Issues 692 Canada Immigration Invitations
Aircraft Assemblers Can Now Immigrate To Canada Through Express Entry
What You Should Know About Targeted Express Entry Draws in 2023
Ontario Invites 10 Canada Immigration Candidates In New Entrepreneur Draw