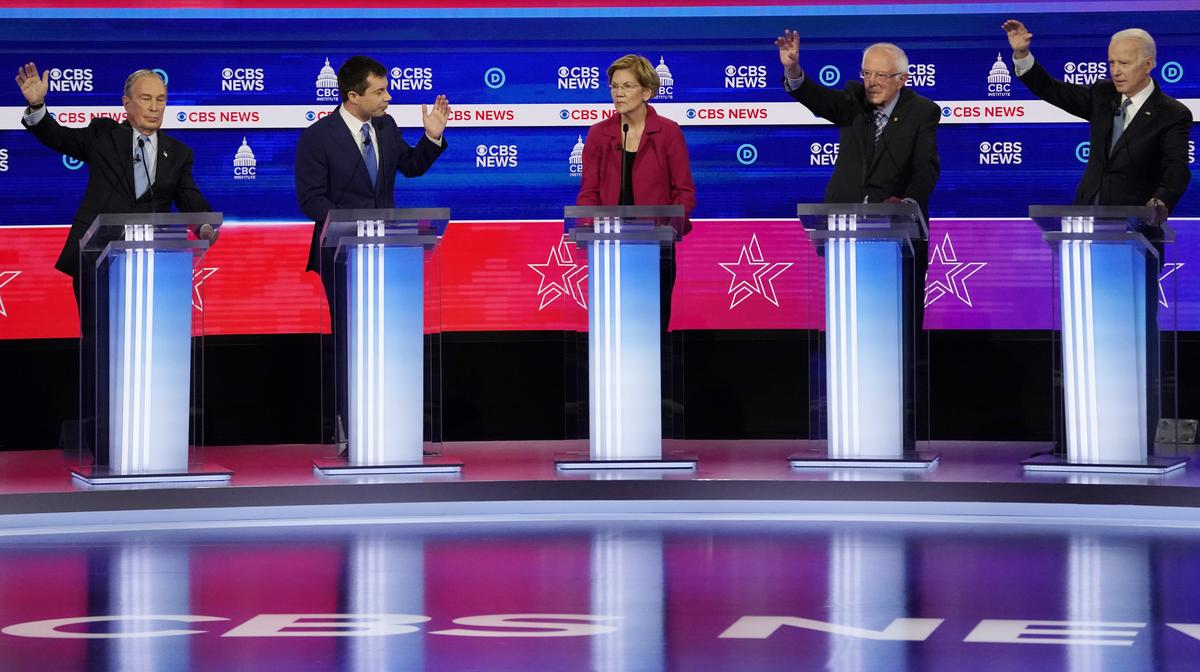 CHARLESTON, S.C. (Reuters) – Surging Democratic presidential front-runner Bernie Sanders came under withering fire in a boisterous debate in South Carolina on Tuesday, as rivals attacked the high cost of his ambitious economic agenda and warned he would cost the party the White House and control of Congress.

In a debate that featured candidates repeatedly shouting over one another and ignoring their time limits, Sanders’ opponents united in attacking the independent senator and self-avowed democratic socialist as a risky choice to lead Democrats against Republican President Donald Trump in November.

“Bernie will lose to Donald Trump, and Donald Trump and the House and the Senate and some of the statehouses will all go red,” billionaire former New York Mayor Michael Bloomberg said, adding that would be “a catastrophe.”

Pete Buttigieg, the moderate former mayor of South Bend, Indiana, criticized Sanders for the shifting estimates on the costs of his proposals such as government-run healthcare and questioned how he could get his agenda passed.

“I can tell you exactly how it all adds up. It adds up to four more years of Donald Trump,” Buttigieg said, adding that a Sanders race against Trump would be devastating to the country.

“If you think the last four years has been chaotic, divisive, toxic, exhausting, imagine spending the better part of 2020 with Bernie Sanders versus Donald Trump,” Buttigieg said.

Sanders defended his ability to pay for costly programs such as Medicare for All, which would replace private health insurance with a government-run program, and said he was raising issues supported by the American people.

“My favorability nationally, I believe, is the highest up here,” Sanders said in a reference to opinion polls, adding he beat Trump in most national surveys.

“If you want to beat Trump, what you’re going to need is an unprecedented grassroots movement of black and white and Latino, Native American and Asian, people who are standing up and fighting for justice. That’s what our movement is about,” Sanders said.

Sanders has taken command of the race after strong showings in the first three nominating contests in Iowa, New Hampshire and Nevada, and the debate was the last chance for his opponents to try to stop his momentum before Saturday’s South Carolina primary and next week’s 14 vital Super Tuesday contests.

Even Elizabeth Warren, a senator from Massachusetts and progressive ally of Sanders who is trying to revive a struggling campaign, took a swing at her old friend.

“I think I would make a better president than Bernie. And the reason for that is that getting a progressive agenda enacted is going to be really hard,” she said. “I dug in, I did the work, and then Bernie’s team trashed me.”

Senator Amy Klobuchar said neither Sanders nor Warren had shown the leadership in the Senate to accomplish much.

“It matters if you can actually get things done,” she said.

Bloomberg, who turned in a shaky performance in his debut debate last week in Nevada, was sharper this time, defending his treatment of women after Warren attacked what she said was his history of making sexist comments.

He said he had been wrong to make jokes that women who worked for him found offensive. “I don’t remember what they were,” he said. “If it bothered them, I was wrong, and I apologize.”

“Vladimir Putin thinks that Donald Trump should be president of the United States, and that’s why Russia is helping you get elected so you lose to him,” Bloomberg told Sanders.

Sanders shot back: “Hey Mr. Putin, if I’m president of the United States, trust me you’re not going to interfere in any more elections,” in reference to Russian President Vladimir Putin.

Sanders was criticized for his recent comments praising aspects of the late Cuban revolutionary leader Fidel Castro’s leadership in Cuba, but said he opposed authoritarianism all over the world.

“When dictatorships – whether it is the Chinese or the Cubans – do something good, you acknowledge that. But you don’t have to trade love letters with them,” he said.

Sanders, who is Jewish, also drew the anger of the pro-Israel American Israel Public Affairs Committee (AIPAC) lobby group and its supporters over the weekend when he said he would skip its meeting, labeling it a platform for “bigotry.”

During the debate, he said Israeli Prime Minister Benjamin Netanyahu was “a reactionary racist.”

The pressure for a strong performance was high for all of the contenders. Joe Biden, the national front-runner not so long ago, needs to win South Carolina to keep his campaign alive and said he expected to finish first on Saturday.

Biden has been counting on his traditional strong support from black voters, who make up about 60 percent of the Democratic electorate in the state.

Billionaire activist Tom Steyer warned the party was headed to danger with either Sanders or Bloomberg on top of the ticket.

“We are looking at a party that has decided that we’re either going to support someone who is a democratic socialist or somebody who has a long history of being a Republican,” Steyer said, a reference to Bloomberg.

“I am scared, if we cannot pull this party together, if we go to one of those extremes, we take a terrible risk of re-electing Donald Trump.”