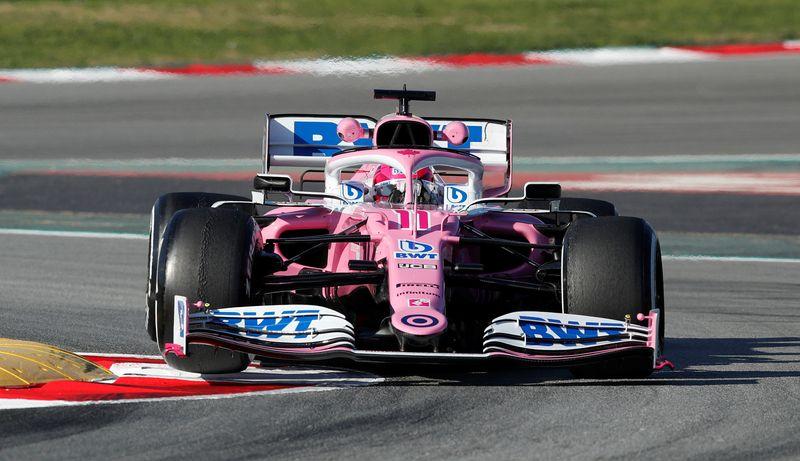 The RP20 represents a big change of design philosophy for the Silverstone-based team, who use Mercedes engines and gearboxes as well as the same wind tunnel.

“It shares some resemblance in some areas. Lots of cars look like other cars,” Green told reporters during testing at the Circuit de Catalunya on Thursday when asked about the similarities.

“We have one more year left in these regulations. I think it’s time to try something new, to take a risk, and I think we’ve taken a very, very big risk with what we’ve done with the car.”

Formula One is facing sweeping rule changes next year but this season’s cars are an evolution of those that raced in 2019.

Mercedes, with six-times champion Hamilton, have won the last six drivers’ and constructors’ titles and start as favourites again in Australia on March 15.

Green explained that Racing Point had previously followed a design philosophy closer to the Red Bulls but realised midway through last year that the car’s development was starting to peter out.

“It wasn’t making the gains we were hoping for,” he said of the RP19. “It was clear that if we carried on the route we were going, we were going to end up at best where we finished the championship last year.

“We decided to take a risk and that risk was effectively to tear up what we’ve done in the past few years and start again from scratch, and what we could see MGP (Mercedes Grand Prix) have been doing.”

Perez was best of the rest behind the two Mercedes in terms of speed on the opening day at the Circuit de Catalunya on Wednesday and fastest in the morning session on Thursday.

“I don’t think what we’ve done is particularly new as far as taking a team’s concept and doing it ourselves, that’s been prolific in Formula One since the very first days,” Green added.

Green said the new car would get an upgrade for Australia but after that the team were likely to focus their attention on the 2021 challenger.

“One of the things we were hoping for is we could take a reasonable step forward and not have to continue to develop the car through the season,” he said.