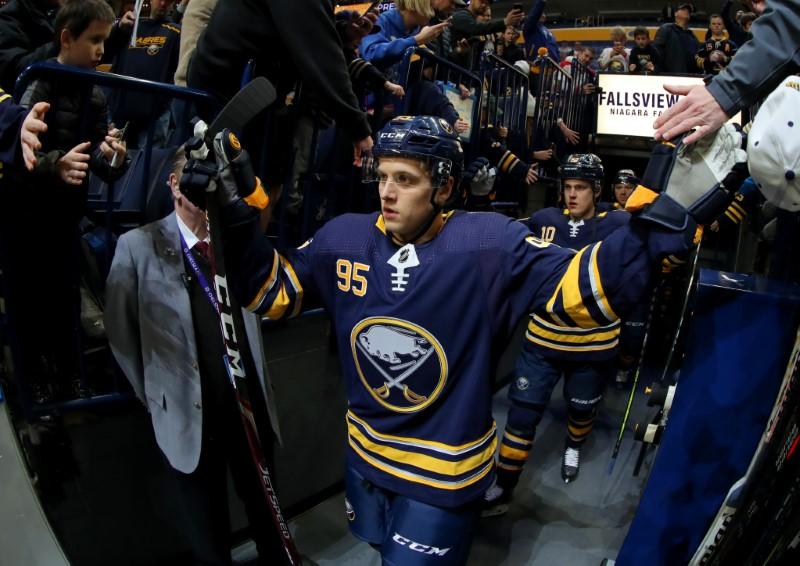 Dominik Kahun scored in the seventh round of a shootout to give the Buffalo Sabres a 3-2 victory over the visiting Washington Capitals on Monday.

Sabers goalie Linus Ullmark stopped 33 of 35 shots during open play and then made six more saves during the shootout. It was an impressive return for Ullmark, who was playing for the first time in 18 games after recovering from a lower-body injury.

Victor Olofsson and Jack Eichel scored in regulation for Buffalo, which snapped an 0-6-0 streak.

Alexander Ovechkin had two points, including his 48th goal of the season to tie Boston’s David Pastrnak for the league scoring lead. Dmitry Orlov also scored for the Capitals.

Defenseman Shea Theodore scored 2:13 into overtime to lift Vegas over host Edmonton in a matchup of the top two teams in the Pacific Division.

Jonathan Marchessault forced a turnover in the offensive zone and alertly fed Theodore, who wired a shot from the high slot that beat Mikko Koskinen. Marchessault and Nicolas Roy each scored, and Marc-Andre Fleury finished with 22 saves for first-place Vegas.

Ryan Nugent-Hopkins and Alex Chiasson scored, and Koskinen turned aside 45 shots for Edmonton, which now trails Vegas by three points in the Pacific Division.

Jonathan Quick made 21 saves, and host Los Angeles extended its season-high winning streak to six games by defeating Colorado, which missed a chance to tie St. Louis for first place in the Central Division.

Quick has allowed one goal or fewer in five of his past six starts, going 5-0-1 in that span. Mikey Anderson scored his first NHL goal in his fifth game, and Austin Wagner and Alex Iafallo also scored for the Kings, who hadn’t won six in a row since an eight-game winning streak in 2017.

Pierre-Edouard Bellemare scored, and Pavel Francouz made 32 saves for the Avalanche.

Mike Hoffman also scored for the Panthers, and Chris Driedger made 26 saves. Driedger has stopped 85 of 89 shots in his past three starts while filling in for the injured Sergei Bobrovsky.

Colton Parayko scored, and Jordan Binnington made 32 saves for the Blues, who lost for just the second time in their last 11 games.

Winnipeg native Cody Eakin scored the go-ahead goal in the third period — his first goal for his hometown club — to lead the host Jets to a 4-2 comeback win over Arizona. The Jets’ season-high sixth straight home victory bumped Winnipeg into the top wild-card spot in the Western Conference.

Nikolaj Ehlers notched a goal and two assists, Tucker Poolman had a goal and an assist, and Mark Scheifele scored for the Jets. Connor Hellebuyck stopped 36 of 38 shots. Winnipeg’s Paul Maurice coached his 1,599th game, breaking a tie with Ken Hitchcock for the fifth-most NHL games behind the bench.