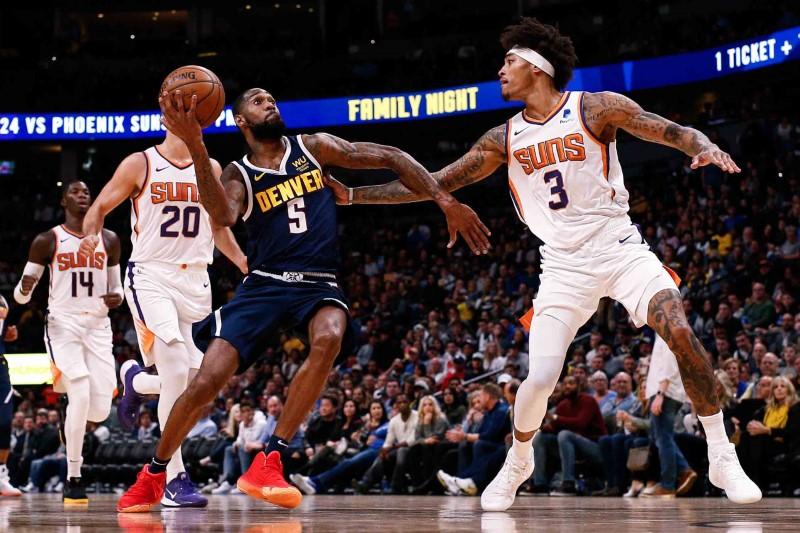 Paul Millsap scored 23 points and hit all nine of his free throws, Will Barton and Jamal Murray added 22 points each, and the host Denver Nuggets beat the Phoenix Suns 116-104 on Sunday night.

Mason Plumlee had 14 points, Monte Morris finished with 10 and Nikola Jokic had eight points and 13 rebounds for the Nuggets, who have won five straight.

Cheick Diallo scored a career-high 22 points on 10-of-12 shooting, Dario Saric had 18 points and a career-high 17 rebounds, and Elie Okobo had a season-high 16 points. Phoenix guard Devin Booker was held to a season-low 12 points a night after scoring 35 in a win at Minnesota on Saturday.

The Suns played without guard Ricky Rubio (back spasms) and center Aron Baynes (right hip flexor strain) for the third straight game. Rubio has missed four of the last five games, and Baynes has sat for four straight.

Doncic finished with 41 points and 10 assists, while Porzingis added 23 points and 13 rebounds. Hardaway scored 31 points on 10-of-18 shooting, including 5 of 11 on 3-pointers, to power the Mavericks.

The Rockets dropped their third consecutive game following their eight-game winning streak. The Rockets trailed wire-to-wire, never even forging a tie, though they did come close, getting within five late.

Spencer Dinwiddie scored a game-high 30 points for visiting Brooklyn, which withstood a furious fourth quarter rally by New York to escape with a victory.

Jarrett Allen finished with 18 points and 10 rebounds, and Taurean Prince added 14 points and 11 rebounds for the Nets, who have won three in a row — all without the injured Kyrie Irving and Caris LeVert — to get back to .500 at 8-8. Joe Harris added 13 points, and Garrett Temple finished with 12 points.

Marcus Morris Sr. scored 26 points for the Knicks, who have lost three in a row and four of five to fall into last place in the Eastern Conference at 4-13. Julius Randle scored 15 points, followed by Wayne Ellington (12) and Dennis Smith Jr. (10).

Bogdan Bogdanovic stalled a Washington rally with a 3-pointer with 1:28 remaining, allowing visiting Sacramento to hang on for the victory.

Harrison Barnes led all scorers with 26 points, including two free throws with 1:56 left that set the stage for Bogdanovic’s back-breaking hoop. Bogdanovic added three free throws in the final 62 seconds, sending Sacramento to the seventh win in its last 10 games since an 0-5 start.

Bradley Beal had 20 points and a game-high eight assists to pace the Wizards.

Montrezl Harrell scored 24 of his 34 points in the second half, and host Los Angeles rolled over New Orleans.

Harrell, who also collected 12 rebounds, connected on 13 of 18 shots to tie a career high in scoring. Kawhi Leonard had 26 points, Lou Williams added 19 and Paul George finished with 18 points as the Clippers captured their fifth consecutive win.