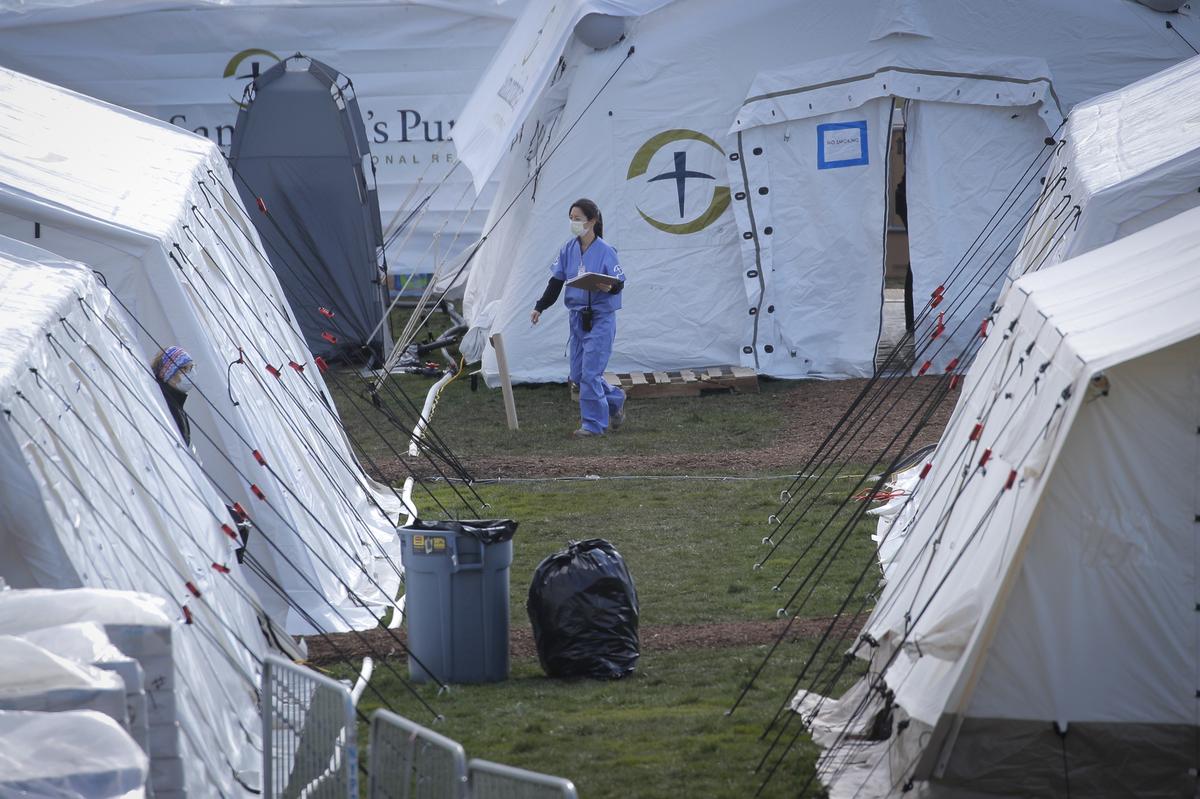 LOS ANGELES (Reuters) – Four new states imposed sweeping stay-at-home directives on Wednesday in response to the coronavirus pandemic, putting over 80% of Americans under lockdown as the number of deaths and cases in the United States soared to new daily highs for the fourth day in a row.

The governors of Florida, Georgia, Mississippi and Nevada each instituted the strict policies on a day when the death toll from COVID-19 shot up by 925 to more than 4,800 nationwide, with 214,000 confirmed cases, according to a Reuters tally.

President Donald Trump said he saw no need for the federal government to issue a nationwide decree, with 39 states and the District of Columbia now requiring residents to stay home except for essential outings to the doctor or grocery store.

For a graphic on the U.S. coronavirus outbreak, click: tmsnrt.rs/2w7hX9T

He also told a White House briefing on Wednesday he was considering a plan to halt flights to coronavirus hot spots.

“We’re certainly looking at it, but once you do that you really are clamping down on an industry that is desperately needed,” Trump told a White House news briefing.

Such a plan might conceivably shut down traffic at airports in hard-hit New York, New Orleans and Detroit.

White House medical experts have forecast that even if Americans hunker down in their homes as told to slow the spread of COVID-19, some 100,000 to 240,000 people could die from the respiratory disease caused by the coronavirus.

A Pentagon official who spoke to Reuters on condition of anonymity said the U.S. Department of Defense was working to provide up to 100,000 body bags for use by civilian authorities in the coming weeks.

New York state remained the epicenter of the outbreak, accounting for more than a third of the U.S. deaths. Governor Andrew Cuomo told police on Wednesday to enforce rules more aggressively for social distancing.

“Young people must get this message, and they still have not gotten the message. You still see too many situations with too much density by young people,” Cuomo, a Democrat, said in imposing rules to close playgrounds, swing sets, basketball courts and similar spaces.

A healthcare worker walks outside a newly constructed field hospital in the East Meadow of Central Park during the outbreak of the coronavirus disease (COVID-19) in the Manhattan borough of New York City, New York, U.S., April 1, 2020. REUTERS/Brendan Mcdermid

“How reckless and irresponsible and selfish for people not to do it on their own,” Cuomo said.

New York City Mayor Bill de Blasio told a news conference the city was contracting with hotels as part of a massive effort to add 65,000 additional hospital beds by the end of the month.

De Blasio, also a Democrat, said the city had arranged to add 10,000 beds at 20 hotels, which have lost most of their guests as travel has stopped.

“This is going to be an epic process during the month of April to build out all that capacity,” de Blasio said. “But this goal can be reached.”

California saw the number of coronavirus cases surge by roughly 1,000 over the day before to more than 8,000 as Governor Gavin Newsom warned that even as stay-at-home policies appeared to be having some effect, the state would run out of intensive- care hospital beds equipped with ventilators within six weeks.

Newsom said California could still manage to “bend” the state’s infection curve more, saving the need for additional beds, if residents were rigorous in staying home and avoiding contact with others.

“We are in a completely different place than the state of New York and I hope we will continue to be, but we won’t unless people continue to practice physical distancing and do their part,” the Democratic governor told a news conference in the state capital, Sacramento.

But Americans under lockdown and largely unable to work struggled with making ends meet as rent came due on Wednesday, the first day of the month.

In Oakland, California, Alfa Cristina Morales said she had been surviving on money saved for a U.S. citizenship application since losing her job at a coffee shop. Morales had sought unemployment benefits to support her 2-year-old son.

“We’re worried that it won’t be enough,” she said.

Connecticut Governor Ned Lamont said a 6-week-old baby had died from COVID-19, in what he called “a reminder that nobody is safe from this virus.”

“We were concerned about a deluge into the hospitals, but I think it turns out that there will probably be some who need to go, but it’s very manageable and the local hospital system thinks that they can handle it,” DeSantis, a Republican, told Fox.

At Fort Lauderdale, Floridians aboard the ships would be taken home and flights arranged for foreigners, he said.