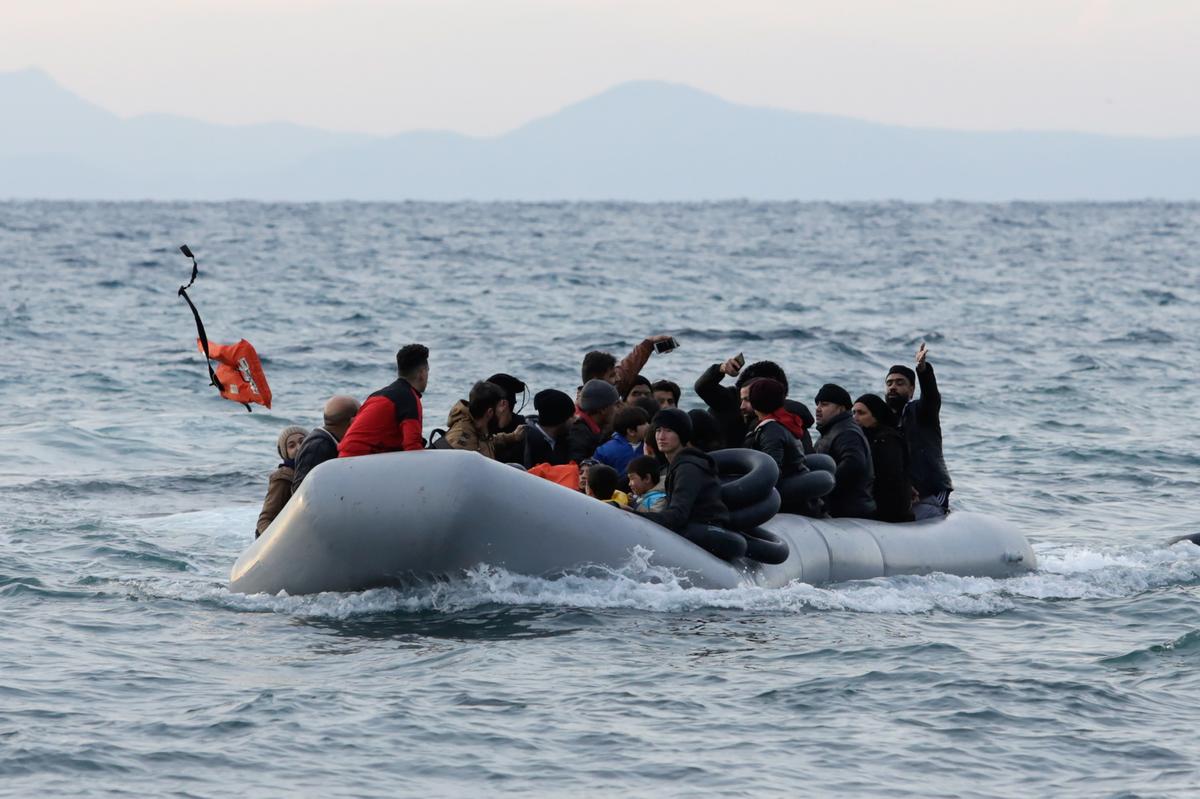 KASTANIES/LESBOS, Greece (Reuters) – Greek police fired tear gas to repel hundreds of stone-throwing migrants who sought to force their way across the border from Turkey on Sunday, witnesses said, with thousands more behind them after Ankara relaxed curbs on their movement.

It was the second straight day of clashes at the border crossing by the northeastern Greek town of Kastanies in which police drove back approaching migrants with volleys of tear gas.

Greece had placed its borders on maximum-security footing earlier on Sunday after hundreds of other migrants used porous crossing points to enter the country.

At least 500 people had arrived by sea on the Greek islands of Lesbos, Chios and Samos close to the Turkish coast within a few hours on Sunday morning, police said.

Along the northeastern mainland border, some migrants waded across a shallow section of the Evro River to the Greek side. Witnesses said there were groups of up to 30, including an Afghan mother with a five-day-old infant, by the side of a road after having forded the river.

The clashes occurred later in the day at the Kastanies crossing after riot police reinforced security there. No further details were immediately available as police were escorting reporters away from the scene, citing safety considerations.

A Greek government source said some migrants blocked from crossing had also thrown metal bars and hand-held tear gas canisters at police on the Greek side.

Turkey said on Thursday it would no longer restrain hundreds of thousands of asylum seekers in its territory from reaching Europe, their preferred destination, despite a commitment to do so under a deal reached with the European Union in 2016.

Turkey’s turnabout came after an air strike killed 33 Turkish soldiers in neighboring northwest Syria where Ankara has deployed forces to help secure its border against a new influx of refugees from the Syrian civil war.

Turkey has said funds promised by the EU to help it deal with 3.7 million Syrian refugees already in the country has been slow to arrive; Ankara had threatened several times in the past to open the floodgates if it did not receive more support.

Its announcement that it had stopped containing migrants within the country triggered an almost instant rush to the border it shares with EU member state Greece.

The crisis poses the toughest test for Greece since 2015 when it came precariously close to bailing out of the euro zone, and, more ominously, brings into sharper focus long-standing tensions with Turkey.

Greek Prime Minister Kyriakos Mitsotakis was to chair a meeting of the national security council later on Sunday. An automated text message sent to mobile phones in the northern border areas of Greece said the country had increased its security to a maximum, urging people not to attempt to enter.

Migrants from Syria, Iraq, Afghanistan and Palestinian territories arrive on a dinghy near the city of Mytilene, after crossing part of the Aegean Sea from Turkey to the island of Lesbos, Greece, March 1, 2020. REUTERS/Elias Marcou

Greece’s Skai TV said Greeks had taken to using loudspeakers in the Kastanies border area to tell migrants, in English and Arabic that they were not welcome: “The Borders are Shut!”

Greece was the main gateway for hundreds of thousands of asylum seekers into Europe in 2015-16. More than 40,000 migrants are stuck on the Aegean islands, living in severely overcrowded camps and filthy conditions, angering local residents.

Greece has vowed to prevent another mass influx of migrants. “This country is not a free-for-all,” Migration Minister Notis Mittarachi told Greece’s Ant1 TV.

A Greek government source put the number of people gathered on the Turkish side of the border on Sunday at 3,000, while the International Organization for Migration (IOM) estimated the number at 13,000.

“Yesterday there were 9,600 attempts to violate our borders, and all were dealt with successfully,” deputy defense minister Alkiviadis Stefanis told Greece’s Skai TV.

“Not only are they not stopping them, but they are helping them,” he added. Greece has spoken of an orchestrated attempt to breach its borders and accused Turkey of actively guiding migrants.

The EU said it was supporting Greece and its neighbor Bulgaria, which also has a border with Turkey – in protecting the 27-nation bloc’s outer frontiers.

It also gave condolences to Turkey over the deadly air strike and said it was ready to step up humanitarian support.

In unscripted remarks at his Sunday blessing on the refugee situation, Pope Francis, who visited Lesbos in 2016, said: “I am a bit saddened by the news about so many displaced people, so many men, women and children thrown out because of war. In these days the situation has become much more serious.”

No migrants had so far tried to cross into Bulgaria from Turkey, but tensions were escalating at Turkish-Greek crossing points “very close” to Bulgarian territory, therefore Sofia had bolstered its own frontier patrols against any illegal entry, Defense Minister Krasimir Karakachanov told national radio.