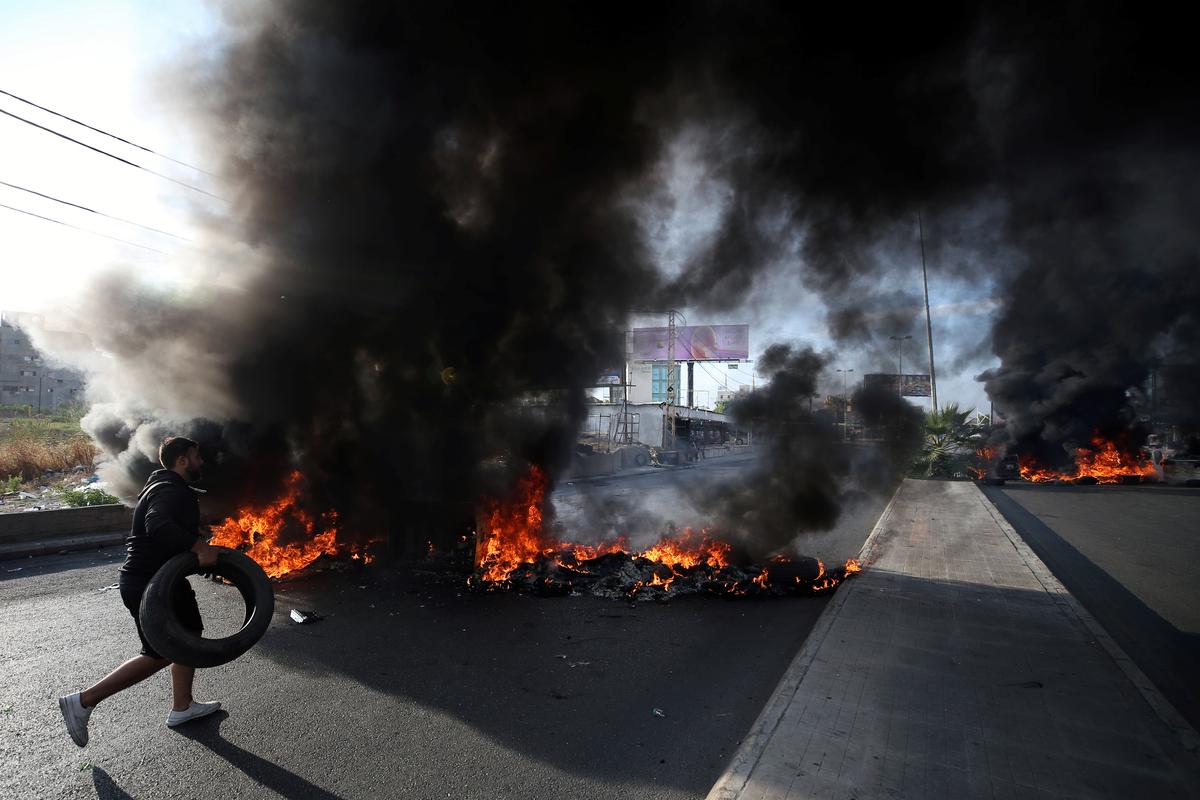 BEIRUT (Reuters) – Lebanese banks said on Monday they would ensure public sector workers were paid their salaries as they remain closed by a wave of protests against politicians blamed for corruption and steering Lebanon toward economic collapse.

Protesters set up new roadblocks early on Monday to keep pressure up, defying security forces who tried to re-open roadways but with orders not to use force.

As the day wore on the protests, now in their 12th day, appeared to be smaller than in recent days.

The crisis has paralyzed Lebanon, closing banks, schools and some businesses. The government has yet to indicate it would cede ground to protesters, whose demands include its resignation.

On Monday President Michel Aoun said on he was “following developments”, and Prime Minister Saad al-Hariri is due to hold a cabinet meeting to discuss one of the measures in an emergency reform package proposed last week.

Lebanon’s banking association said banks would remain shut on Tuesday for a 10th working day, but said the central bank had provided the liquidity necessary to pay out salaries for public sector workers, including security forces.

Banks have previously said they will ensure people receive their end-of-month salaries through ATMs. The banks have said they are staying closed out of concern for the safety of customers and employees.

Bankers and analysts have also cited wide fears depositors will try to take out their savings when banks reopen.

Gabriel Sterne, head of global macro research at Oxford Economics, said Lebanon is facing a “bank jog”, rather than a full-blown bank run. He added that capital controls were needed in the short-term, but can also scare away investors.

The International Monetary Fund (IMF) said it was evaluating an emergency reform package the Lebanese government announced last week, but which has failed to defuse the popular anger or reassure foreign donors.

Capital inflows needed to finance the state deficit and pay for imports have been slowing down, generating financial pressures not seen in decades, including the emergence of a parallel market for dollars.

While Lebanon’s pound currency is officially pegged at 1507.5 to the dollar, parallel market rates have risen in recent months.

One market source quoted a price of 1,700 pounds to the dollar, while a second quoted 1,740, a roughly 15% premium on the official rate.

As economic strains have grown in recent years, Lebanon’s central bank and banks have taken measures to encourage people to keep money in local currency, in longer term deposits and inside the country.

While Lebanon has not imposed hard capital controls, a state prosecutor banned traders and money exchangers from taking significant amounts of physical dollar currency out the country at air and land borders, without specifying amounts.

“We know we are facing lying, corrupt ruling authorities. It’s been 30 years of promises and promises. Why would I believe them now?” said Rawad Taha, 21, a university student manning a roadblock in Beirut.

“I won’t leave the street until the government resigns or there’s a tangible change I can feel.”

On one major road in Beirut, protesters set up a make-shift living room with sofas, armchairs and a fridge for the sit-in.

The leaderless rallies have drawn people from around Lebanon furious at sectarian political leaders they see as plundering state resources for personal gain.

Lebanon is saddled with one of the world’s highest levels of government debt as a share of economic output. The IMF has forecast a fiscal deficit of 9.8% of GDP this year and 11.5% next year.

Prime Minister Hariri’s coalition government, which includes nearly all of Lebanon’s main parties, tried to appease the protesters with a set of reforms including anti-corruption laws and long-delayed measures aimed at fixing state finances.

The plans includes accelerating long-delayed steps to fix the state-run power sector, which drains $2 billion from the treasury per year while failing to meet power needs for the Lebanese.

“We need to see not only what is in the package but also the timeline of the package for a country like Lebanon that has such high level of debt over GDP and high levels of twin deficits,” Jihad Azour, director of the IMF’s Middle East and Central Asia Department told Reuters.

“Fundamental reforms are urgently needed in Lebanon in order to restore macro-economic stability, bring confidence back, stimulate growth and provide some solutions to the issues that were raised by the street,” Azour said.