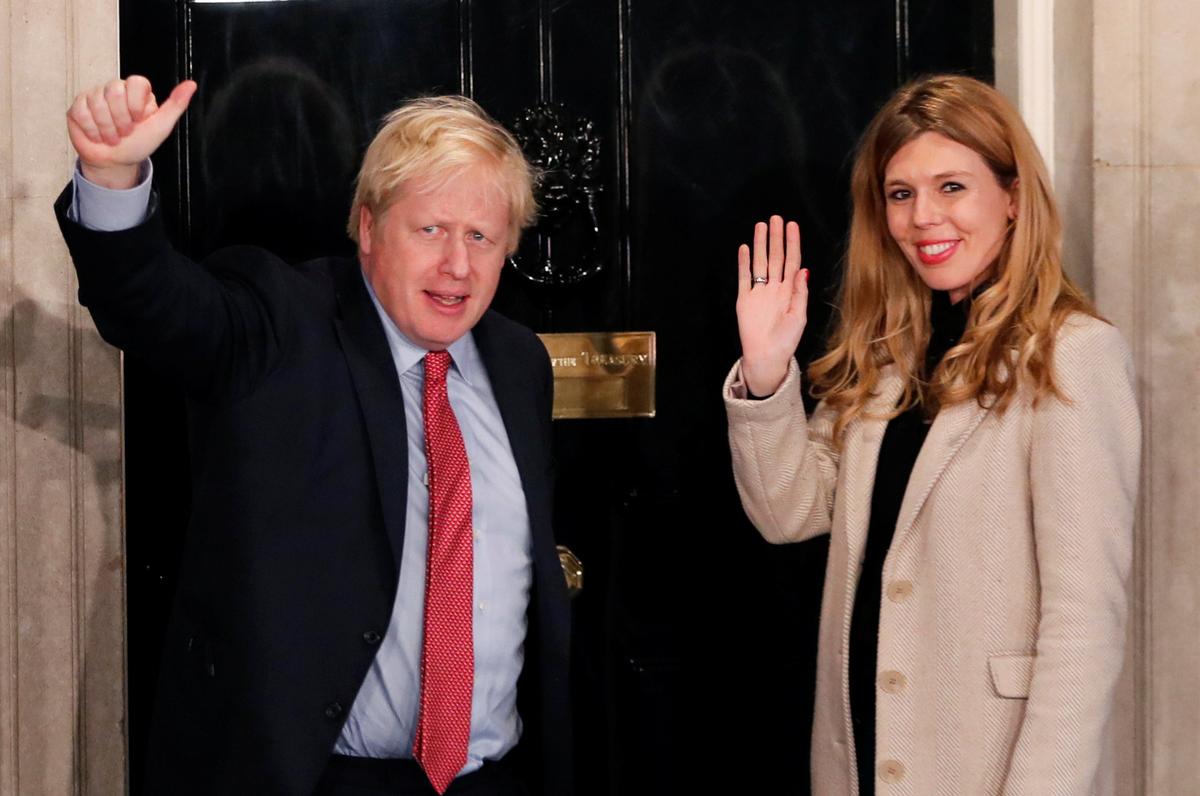 LONDON (Reuters) – British Prime Minister Boris Johnson and his girlfriend Carrie Symonds announced on Saturday they are expecting their first child together and are engaged to be married.

FILE PHOTO: Britain’s Prime Minister Boris Johnson and his girlfriend Carrie Symonds gesture as they arrive at 10 Downing Street on the morning after the general election in London, Britain, December 13, 2019. REUTERS/Thomas Mukoya/File Photo

The couple have been living together in Downing Street since Johnson became prime minister in July, with Symonds the first unmarried partner to live openly with a British leader in recent history.

“The prime minister and Miss Symonds are very pleased to announce their engagement and that they are expecting a baby in the early summer,” the couple said in a statement.

The 55-year-old Johnson took office in July and led his Conservative Party to a decisive election victory in December.

The announcement means he will become the first British prime minister to marry in office for 250 years.

The couple’s relationship was the subject of scrutiny during his bid to take over from Theresa May as prime minister last summer after police were called to Symonds’ home by a neighbour who heard an apparent row between them.

Symonds, 31, said in a message posted on Instagram that she had kept news of her engagement secret until now.

“I wouldn’t normally post this kind of thing on here but I wanted my friends to find out from me,” she said.

“Many of you already know but for my friends that still don’t, we got engaged at the end of last year… and we’ve got a baby hatching early summer,” Symonds said, adding: “Feel incredibly blessed”.

Johnson was congratulated by members of parliament, including his former finance minister, Sajid Javid, who resigned after losing a power struggle over who should control Britain’s economy.

Johnson, known for his rumpled appearance and flamboyant oratory, was previously married to Marina Wheeler, and they had four children together. They announced in September 2018 that they had separated and would divorce after 25 years of marriage.

The couple reached a financial settlement earlier this month, British media have reported.

Johnson has fathered one other child. He has always refused to say how many children he has. During the election campaign, Johnson said that he would not “put them on the pitch”.

Johnson was married to Allegra Mostyn-Owen before Wheeler, so Symonds will be his third wife.

Johnson’s most notable action so far in office has been to fulfil an election campaign pledge to “get Brexit done”. Britain finally left the European Union at the end of January, more than three years after Britons voted in a referendum to leave the bloc.

Johnson will be the first British leader since Augustus Henry FitzRoy, who was prime minister between 1768 to 1770, to remarry in office.