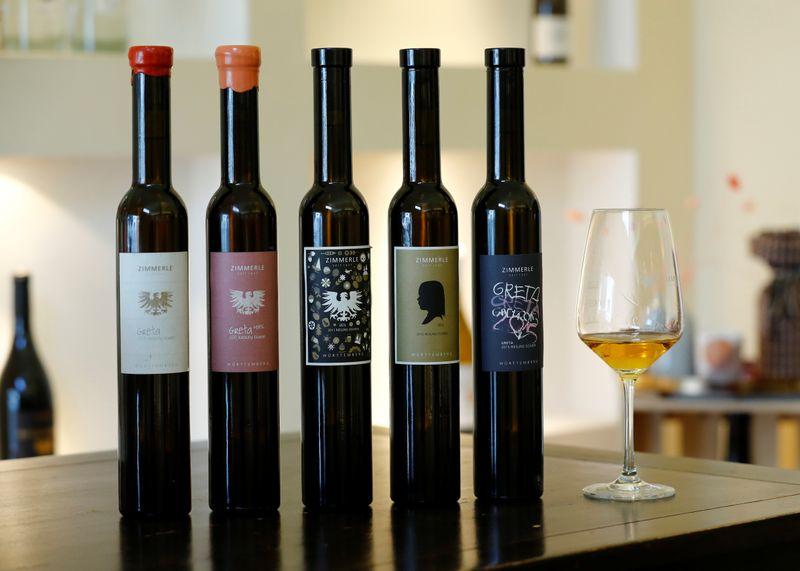 KORB, Germany (Reuters) – One winemaker in southern Germany has succeeded in producing a small, but precious, quantity of ice wine after an unseasonably mild winter ruined the rest of the country’s harvest.

Early vintages of ice wine are pictured next to the fermented must of the 2019 grape harvest at the Zimmerle vineyard in Korb near Stuttgart, Germany, March 11, 2020. REUTERS/Ralph Orlowski

Weingut Zimmerle in Korb, near Stuttgart, harvested Riesling ice wine grapes at -8 degrees Celsius in January after they had frozen on the vine for several hours to produce around 100 liters of golden liquid with an intensely sweet taste.

After Germany’s second-warmest winter on record, he was the only producer here to manage any sort of harvest.

“What’s special about ice wine is that certain conditions must exist in order to press it: one is a minimum temperature of minus 7 degrees Celsius (19.4 degrees Fahrenheit),” Jens Zimmerle told Reuters Television in Korb.

The winemakers press the frozen grapes before they thaw, meaning only a small amount of highly-concentrated wine is produced. That makes it expensive.

Zimmerle said a change in the climate had caused the harvesting season to come earlier in the year. This favors red wine production at the cost of ice wine.

“We are now able to produce expressive heavy red wines and through the climate change phenomenon we no longer have these cold periods which are essential to make ice wine,” he said.

The DWI German Wine Institute is concerned about the future of the speciality, which is often drunk as a dessert wine.

“If the warm winters accumulate in the next few years, ice wines from the German wine regions will soon become even more of a precious rarity than they already are,” said the DWI’s Ernst Buescher.

The meteorological office says this is the second mildest winter in Germany since records began in 1881. Temperatures were 0.3 degrees warmer in 2007.

“What surprises us is that this is the ninth winter in a row where it was too warm and that’s something not seen since 1881,” said Andreas Friedrich of Germany’s Meteorology Service.

“So it can be said that climate change is in full swing and it has even increased its speed,” he added.

The shortage of ice wine this year means it will fetch an even higher price than usual. Prices for a bottle in Germany range from around 20 euros ($23) to several hundred euros.

Although ice wine accounts for only about 0.1% of Germany’s harvest, the tradition boosts the reputation of producers and it often achieves record prices at auction, says the DWI. The biggest foreign markets are Japan, China, Scandinavia and the United States.