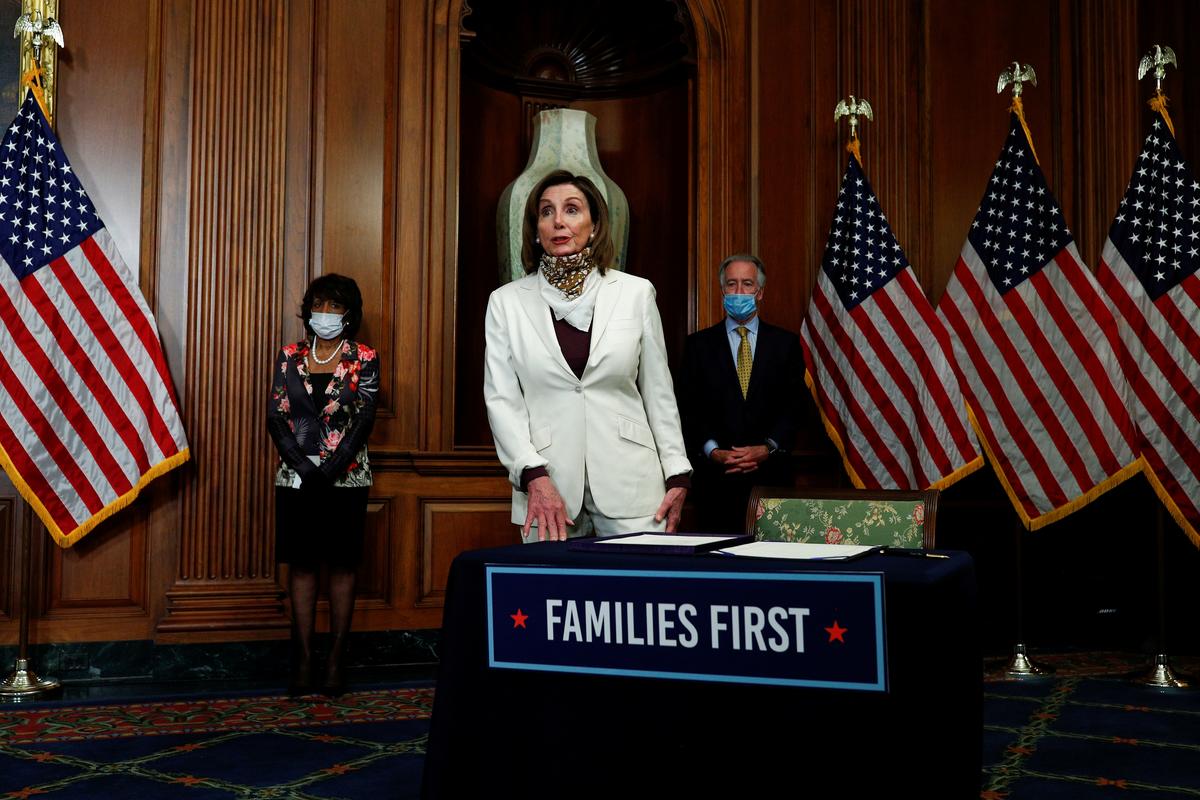 WASHINGTON (Reuters) – After passing $3 trillion of coronavirus relief in a rare run of bipartisanship, Republicans and Democrats in the U.S. Congress girded for a new battle over federal assistance to states and local governments grappling with the deadly outbreak.

Spurred on by governors and local officials, Democrats have put out the word they want to provide a sizable rescue package as part of a broader bill – one that could total at least $2 trillion in coming weeks.

Some Republicans have pushed back hard against the idea as unreasonably expensive and unwarranted.

House of Representatives Speaker Nancy Pelosi warned on Friday, “There will not be a bill without state and local” aid.

Pelosi, the top U.S. Democrat, added in a news conference that the legislation she is having prepared will be ready soon and that it will be “expensive.”

She said she was not yet certain how much money the House Democrats’ bill would offer to state and local governments, but said, “Probably a number equivalent to what we’ve done for small businesses.”

So far, about $730 billion in aid has been made available to small businesses, including approximately $380 billion as part of a broader coronavirus measure President Donald Trump signed into law earlier on Friday.

Leaders of the National Governors Association earlier this month asked Congress for $500 billion in new aid for states and U.S. territories. Pelosi said she was checking on whether that request has changed.

The Democrats’ agenda has some Republicans seething, with Senate Majority Leader Mitch McConnell telling a conservative talk-radio host on Wednesday that he “would certainly be in favor” of letting states enter bankruptcy rather than send them cash.

Trump, a Republican who is seeking re-election in November, followed up on Thursday, noting during his daily coronavirus briefing: “It is interesting that the states that are in trouble … happen to be Democrat.”

With U.S. coronavirus cases approaching 900,000 and deaths passing the 50,000 mark, some governors say that allowing states such as Michigan and Illinois to declare bankruptcy would be a recipe for collapsing the U.S. economy.

With so much dissension, one senior Senate Republican aide wondered whether any legislation would be brought up in the Senate anytime soon.

No. 2 Senate Republican John Thune on Friday said that instead of an aid package to state and local governments, the U.S. Treasury Department might be able to allow greater flexibility in the way those governments could use $150 billion in aid enacted at the end of March.

But a second senior Senate Republican aide, who also asked not to be identified, sketched out a scenario in which lawmakers and the White House could be forced into a fast-track negotiation. Here is how that might unfold:

On Thursday, Congress completed work on a $484 billion emergency bill allowing more federally backed loans to small businesses. The second aide said that even before Trump signed it into law, estimates swirled around Washington that this money could be gobbled up within a week.

FILE PHOTO: U.S. Speaker of the House Nancy Pelosi (D-CA) is seen during the signing of H.R. 266, the Paycheck Protection Program Healthcare Enhancement Act, an additional economic stimulus package that passed earlier in the week by the U.S. Senate, during a ceremony on Capitol Hill as the coronavirus (COVID-19) disease outbreak continues, in Washington, U.S., April 23, 2020. REUTERS/Tom Brenner

If yet another small-business bailout was urgently needed, Pelosi could then be able to get Republicans back into dealmaking mode and push for the state aid.

The environment could be ripe for Trump and Pelosi, following three years of sputtering negotiations, to agree on a massive infrastructure investment plan for roads, bridges, rural broadband access and other public works projects.

“If you’re spending another trillion dollars, unpaid for, Republicans would rather spend it on infrastructure than on direct aid to prop up states,” the staffer said.