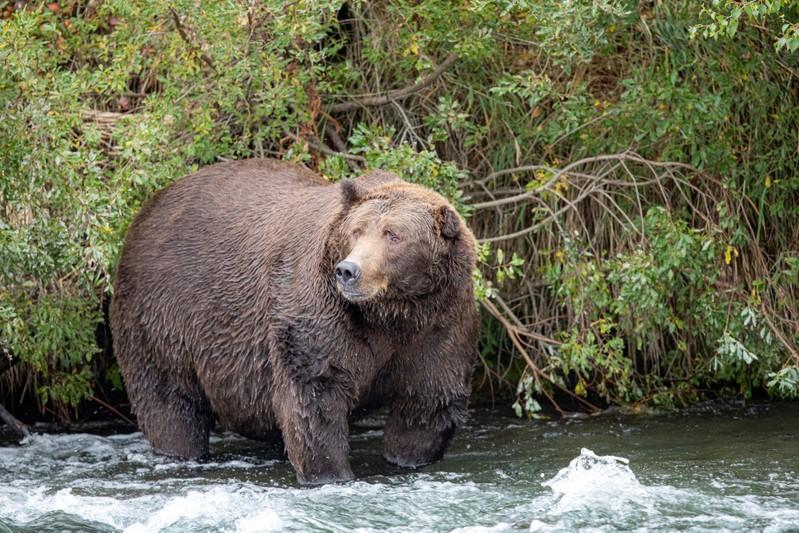 ANCHORAGE, Alaska (Reuters) – Alaska grizzly bears packing on pounds (kilos) for the winter are competing for more than the season’s last salmon. They are also vying for the title of the state’s fattest bear.

Fat Bear Week has become a national internet sensation, pitting individual bears against each other in an online voting contest. This year’s event, organized by Katmai National Park and Preserve, started with 12 bears.

Their photos have been displayed on Facebook www.facebook.com/KatmaiNPP for online voters to examine. As of Monday morning, the remaining contenders were Lefty, Grazer and Holly, a bear that gained fame a few years ago for adopting an abandoned cub.

The process of elimination concludes with a final round and a champion selected on Tuesday.

At Katmai, a park in southwestern Alaska known for its bountiful salmon runs and the huge grizzlies – Alaskans call them “brown bears” – that feed on them, Fat Bear Week is an annual highlight.

Katmai’s bears need to build body mass before retreating to their hibernation dens in late October or early November.

In summer, the bears congregate at the park’s Brooks River to gorge on salmon. By the time they are ready to waddle into the mountains for their winter sleep, male grizzlies can tip the scales at over 1,000 pounds (454 kg), and females at more than 600 pounds (272 kg). They need that heft. During hibernation, rangers say, bears typically lose about a third of their body weight.

“They work so hard to be so fat to survive the winter,” Boak said.

The weeklong contest started in 2014 as a one-day event called Fat Bear Tuesday. Park officials expanded it the following year.

More than just fat-worshiping fun, the celebration is a valuable way to promote the park and educate the public, Boak said. She noted that schools from as far away as the East Coast have incorporated Fat Bear Week into their curriculum. “What a great way to get students excited about the natural world,” she said.

This year’s heavyweight contenders, still plucking salmon out of Brooks River, have had plentiful food supply, Boak said. But Alaska’s warming trend, including its just-ended, record-hot summer, might be interfering with the bears’ eating habits.

When Katmai’s July temperatures approached 90 F degrees (32.2 Celsius), bears stopped fishing and started trying to beat the heat, not easy for fat animals with thick, shaggy coats, Boak said. “There was a lot of lying down in the water,” she said.

Salmon were affected, too. For a while, Boak said, salmon lingered downstream in a lake cooled by glacial melt, avoiding the excessively warm waters of Brooks River.

Even bear fans who miss the chance to vote for their fat favorites will have other opportunities to keep tabs on the Katmai’s most charismatic critters. The park operates a live-stream “bear cam” that attracts millions of viewers each year.

Reporting by Yereth Rosen in Anchorage; Editing by Steve Gorman and Sandra Maler