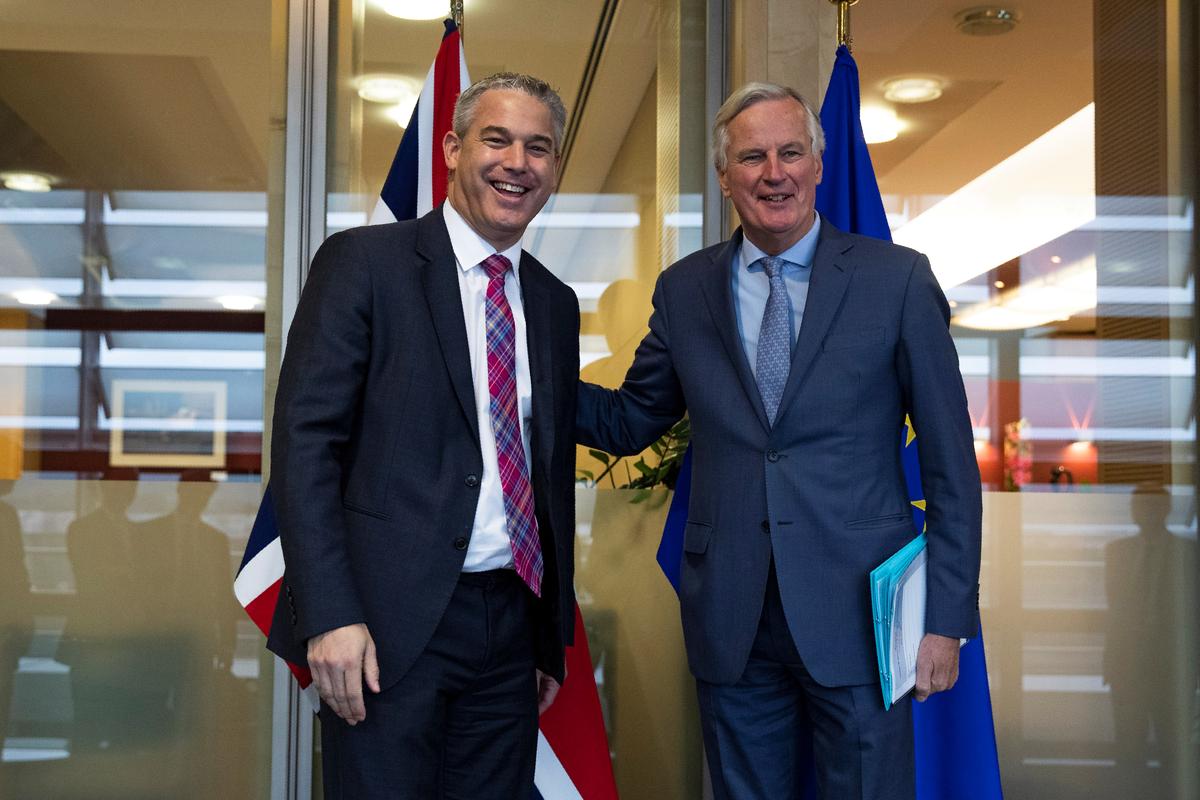 BRUSSELS (Reuters) – The European Union and Britain agreed on Friday to hold intense talks over the next few days in a bid to secure a deal over Britain’s departure from the bloc, but arrangements over British-Irish border controls remain at issue, the EU said.

A flurry of activity has brought the fraught bargaining process to a new level as Britain’s scheduled departure date of Oct. 31 grows ever closer, but it is still uncertain whether the two sides can make a breakthrough before then.

Some officials expressed guarded optimism, while financial markets and banks were buoyed by the latest pronouncements. Sterling jumped to a three-month high.

But British Prime Minister Boris Johnson said it was not yet a “done deal” and the United Kingdom was still ready to leave the EU without one if necessary.

That followed a statement from Johnson and Irish Prime Minister Leo Varadkar on Thursday that they had found “a pathway” to a possible deal.

After Barnier briefed ambassadors from the 27 countries that will remain in the EU, the European Commission said the two sides had agreed to intensify discussions over the coming days and the Europeans would take stock again on Monday.

“The EU’s position remains the same: there must be a legally operative solution in the Withdrawal Agreement that avoids a hard border on the island of Ireland, protects the all-island economy and the Good Friday (Belfast) Agreement in all its dimensions, and safeguards the integrity of the Single Market,”

the Commission said in a statement.

The 1998 Good Friday Agreement ended three decades of sectarian and political conflict in Northern Ireland that killed more than 3,500 people.

A diplomat and an EU official said Barnier had told member states that Britain had changed its position to now accept that the proposed replacement to the so-called “backstop” cannot erect a customs border between EU member Ireland and the British province of Northern Ireland.

“On customs, they admitted that the solution cannot result in the creation of a border in Ireland,” the diplomat said, adding that this was the justification for intensified talks over the weekend.

Johnson declined to give a direct answer when asked by reporters in London if Northern Ireland would be leaving the EU customs union.

He said that despite his talks with Varadkar on Thursday: “That doesn’t mean it’s a done deal. There’s a way to go.”

If negotiators fail to reach agreement “then we have to be ready, as this country is and will be, to come out with no deal if we absolutely have to,” Johnson said.

One European diplomat indicated to Reuters that there was not too much hope on the EU side that a divorce deal could be sealed before the end of the month.

“It’s a tunnel with a very small light at the end of it,” a second diplomat said.

Barnier told reporters as he left his meeting with Barclay: “Brexit is like climbing a mountain. We need vigilance, determination and patience.”

In Paris, French President Emmanuel Macron, asked by a Reuters reporter if there was a “glimmer of hope” regarding a Brexit agreement, replied: “Let us wait for the next few hours.”

EU ministers convene in Luxembourg on Tuesday for a last preparatory meeting before an EU summit next Thursday and Friday.

DOWN TO THE WIRE

The pronouncements came at the end of a tumultuous week in which Brexit negotiations have shifted wildly, starting with a public row between London and Brussels. Both sides have appeared anxious to avoid taking the blame should the deadline for Britain’s departure arrive with no deal secured.

But to get a deal done, Prime Minister Boris Johnson must also sell any deal to the British parliament, which he suspended unlawfully last month and where he has no majority. Parliament has passed a law saying that Britain cannot leave the bloc without a deal.

Johnson, the face of the 2016 Brexit referendum campaign, insists the country will leave on Oct. 31 with or without an agreement but he has not explained how that will be possible without defying parliament.

The Brexit issue has deeply polarised the country and many businesses fear they will be hit badly by a disorderly break with the EU in just a few weeks a time. A no-deal Brexit could also hurt global growth, roil financial markets and could even split the United Kingdom.

Big investment banks said on Friday they had become more optimistic on the prospects for a Brexit deal following the upbeat meeting between Johnson and Irish Prime Minister Leo Varadkar.

The latest developments pushed sterling to a three-month high, taking its rally since Thursday to more than 3%, its biggest two-day gain since mid-June 2016, before the Brexit referendum.

Shares in companies exposed to Britain’s economy also surged with Royal Bank of Scotland up around 15% on the day and housebuilders such as Persimmon, Barrett and Taylor Wimpey all up about 10%.

The yield on 10-year British government bonds was on track for its biggest three-day rise since 2017.