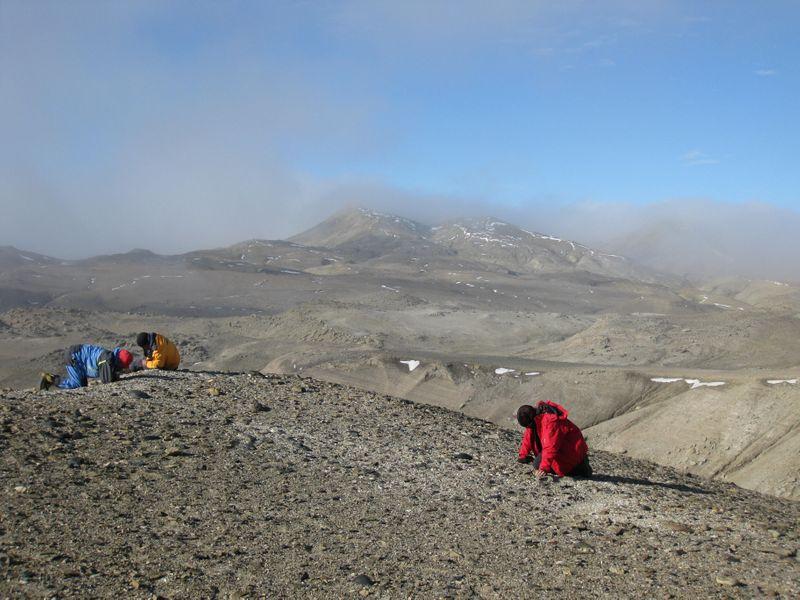 WASHINGTON (Reuters) – When paleontologist Thomas Mörs was peering into a microscope while sorting through tiny 40 million-year-old fossils unearthed on Seymour Island near the tip of the Antarctic Peninsula, he came across quite a surprise – hip and skull bones of a frog.

Paleontologists working at the site on Antarctica’s Seymour Island where fossils of an Eocene frog were discovered are seen in this photo released on April 24, 2020 in Stockholm, Sweden. Jonas Hagstrom/Swedish Museum of Natural History/Handout via REUTERS

The little amphibian from the Eocene Epoch was a helmeted frog – about 1-1/2 inches (4 cm) long – closely related to five species of helmeted frogs still native to Chile. These frogs get their name from the shape of their heads.

“It was a total unexpected discovery under the microscope. I first found the hip bone, and I directly realized that I found an Antarctic frog – the first. And the first Antarctic amphibian for over 200 million years. So exciting,” said Mörs, a scientist at the Swedish Museum of Natural History and lead author of research published this week in the journal Scientific Reports.

The discovery illustrates how Antarctica, six million years before becoming the desolate land of ice and snow so familiar today, was home to forests and rivers and ponds teeming with life.

“It tells us that whole ecosystems can be wiped out by global climate change, and that it might go fast,” Mörs said.

Antarctica’s climate at the time resembled the modern-day Valdivian rainforest in Chile, very wet with temperatures during the warmest months averaging about 57 degrees Fahrenheit (14 degrees Celsius).

Earth’s southernmost continent boasted an abundance of plant and animal life before becoming a frozen wasteland, with numerous dinosaurs previously identified along with flora including conifers, ferns and flowering plants.

At the time when the little frog was hopping around and dining on insects, ice sheets were already forming in the highlands within the interior of Antarctica.

“Given that there is geological evidence of some glaciation 40 million years ago, it is interesting that the climate still was suitable for cold-blooded land-living vertebrates,” Mörs said.

Until now, the prehistoric amphibians known from Antarctica were members of extinct lineages. The newly identified frog has plenty of living relatives. South America’s helmeted frogs are part of a group called Australobatrachia, or “southern frogs,” that also has members living in Australia and New Guinea.

“Frogs were known from all continents, except Antarctica,” Mörs added. “And now we know that they lived on all seven, before one of them froze.”