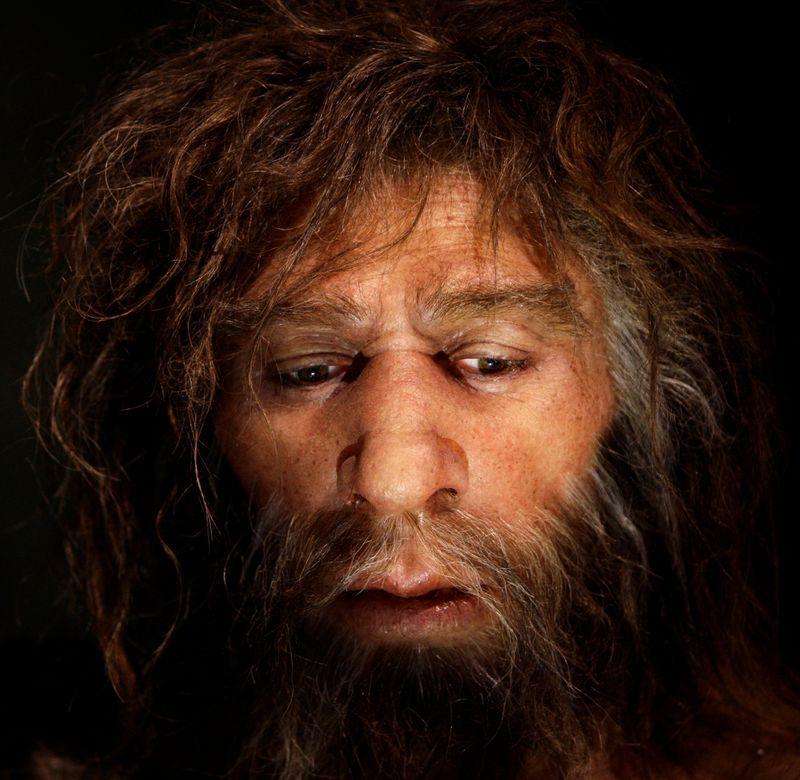 WASHINGTON (Reuters) – Neanderthals used plant fibers to create string more than 40,000 years ago at a site in France where they hunted reindeer, further evidence according to scientists of the ingenuity and cognitive capabilities of our closest extinct human relatives.

FILE PHOTO: Hyperrealistic face of a Neanderthal male is displayed in a cave in the Neanderthal Museum in the northern Croatian town of Krapina February 25, 2010. REUTERS/Nikola Solic/File Photo

Researchers on Thursday described a string fragment – comprised of three small bundles of fibers twisted together into a cord – associated with a stone cutting tool that may have been used to skin animal carcasses.

The string dates to an occupation by Neanderthals at the Abri du Maras archeological site in southeastern France, 30 miles (50 km) north of Avignon, between 42,000 and 52,000 years ago, where they apparently hunted reindeer during seasonal migrations.

It represents the latest evidence to debunk the stereotype of Neanderthals as our dimwitted cousins. The oldest indication of string-making by Homo sapiens dates to 19,000 years ago at a site in Israel.

“The cord, as well as fiber technology in general, is an example of an infinite use of finite means,” said anthropologist Bruce Hardy of Kenyon College in Ohio, lead author of the research published in the journal Scientific Reports.

“Strings and rope can be used in many ways: Tying tools onto a haft, snares, bags, nets, et cetera. Fiber technology in general is foundational in our society – from strings and ropes to tie things together, clothing, and even twisted wires used as cables in construction of modern buildings,” Hardy added.

The quarter-inch-long (6-mm-long) fragment apparently was made from fibers from the inner bark of a conifer tree. It may have been used to bind the stone-flake blade – 2-1/2 inches (6 cm) long and 1-1/2 inches (4 cm) wide – to a handle, or perhaps been part of a bag or net that ended up under the tool.

Other studies have shown Neanderthals used complex group hunting methods, may have used spoken language, used pigments probably for body painting, used symbolic objects and may have buried their dead with flowers. They disappeared a few thousand years after Homo sapiens swept through their Eurasian homelands roughly 40,000 years ago.

Study co-author Marie-Hélène Moncel of the National Museum of Natural History in Paris said Neanderthals should be considered on their own merits rather than merely comparing them to our species.

“If we want to compare a pear and an apple, we observe the characteristics of the two fruits: Different but both good depending on what you prefer. How to compare them? They are just different,” Moncel said.

“Neanderthals are a group that are typically defined by their extinction,” Hardy added. “Because we don’t see Neanderthals walking down the street with us, we assume that they must have done something wrong. Therefore we tend to look for deficiencies rather than strengths. This evidence suggests that they are not terribly different from us in the way they thought and navigated the world.”