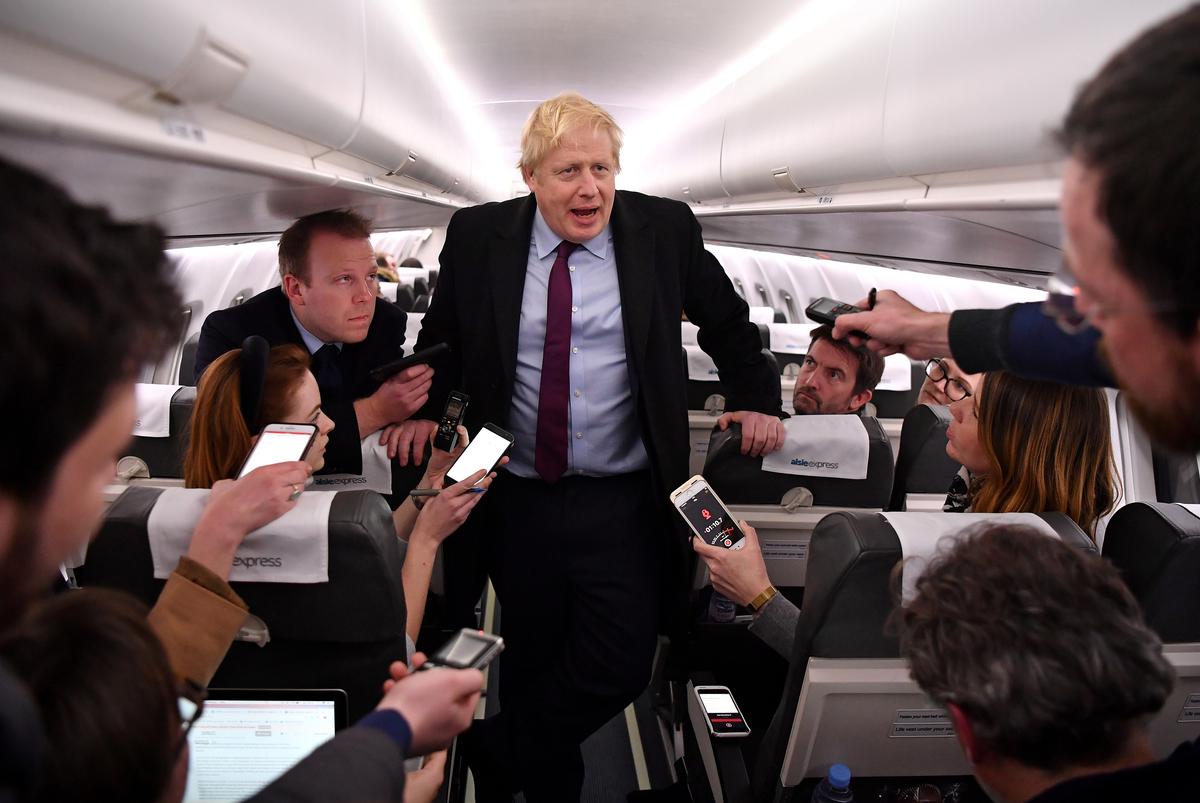 LONDON (Reuters) – Prime Minister Boris Johnson will bolster his argument on Tuesday for leaving the European Union early next year, urging voters to return him to power so Britain can “rip up the EU rule book and write a new one for ourselves”.

Britain’s Prime Minister and Conservative leader Boris Johnson talks with journalists as he travels aboard a plane bound to Birmingham, Britain, December 9, 2019. Ben Stansall/Pool via REUTERS

Just days before Britain votes in an election he called to try to break the deadlock over Brexit, Johnson will repeat his desire to “finally get Brexit done” on a tour of traditionally Labour supporting areas he hopes to win over.

He will also hope to get his campaign back on track after he was criticised on Monday for his response to being shown a photo of a sick child lying on a hospital floor and after being heckled by a voter over his election tactics.

Johnson has put his oft-repeated pledge for a quick Brexit at the heart of his election campaign, hoping to win the backing of those who voted to leave the EU in the 2016 referendum.

The main opposition Labour Party has also said it will get Brexit “sorted” in six months, but its leader, Jeremy Corbyn, has put more emphasis on policies to increase spending on healthcare and education, and increase the role of the state.

“If (we) do break free, there’s a bright future waiting for us with all the opportunities of Brexit,” he will say on a campaign trip to Staffordshire in central England, according to excerpts of his speech.

“We can literally rip up the EU rule book and write a new one for ourselves … We can do all this and so much more if we regain our independence – we just need to vote for it, one more time, this Thursday.”

Opinion polls put Johnson in the lead before Thursday’s vote, but some have shown Labour is catching up, and with so many Britons as yet undecided, the result is hard to predict.

Johnson’s team hopes to break the opposition party’s hold on voters in regions of northern and central England, the country’s so-called red-wall, who have, sometimes for generations, rejected his party’s overtures.

The Conservative message is a simple appeal to those Labour supporters who backed Brexit – only Johnson will get it done. Labour says even if Britain leaves at the current deadline of Jan. 31, that would only mean the beginning of what could be lengthy new trade talks with both the EU and other countries.

“The stalemate in parliament has held this country back for too long,” Johnson will say. “It’s time to send in the bulldozers and smash through the gridlock.”

Prepare to study in Canada
Study permit: Who can apply
Temporary Workers, International Students More And More Important To Canada
Spike in Canadian Immigration Due to New US Abortion Restrictions
Canada Has 3 Of The Most Livable Cities In The World
Roe vs Wade: How Disenfranchised Americans Can Immigrate to Canada
How Do I Get In The Canada Express Entry Pool?