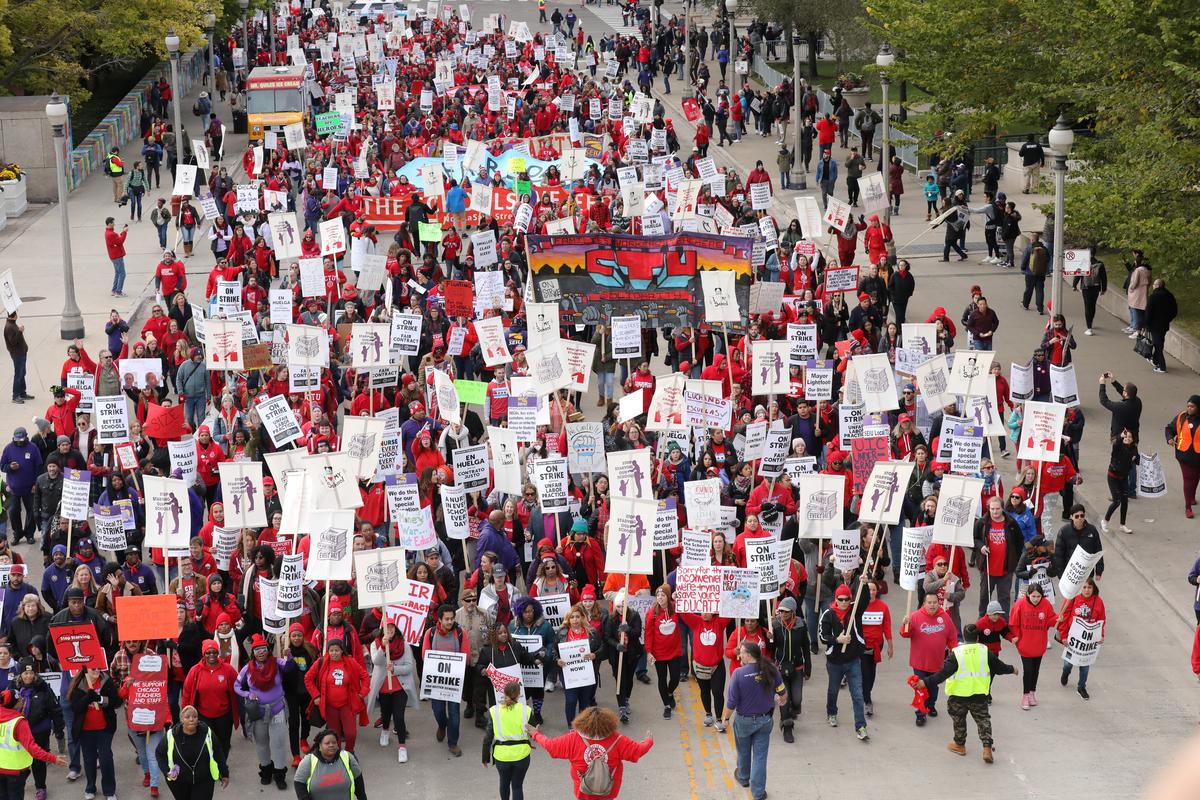 CHICAGO (Reuters) – A teachers’ strike in Chicago moved into the 10th school day on Wednesday, as the teachers’ union and district worked to resolve a contract deadlock over class sizes, support staff levels and pay at the bargaining table.

FILE PHOTO: Teachers protest during a rally and march on the first day of a teacher strike in Chicago, Illinois, U.S. October 17, 2019. REUTERS/John Gress

The strike is the second-longest in a wave of teachers’ strikes that played out across West Virginia, Oklahoma, Arizona and California over the past few years, topped only by a three-week strike in June in Union City, California.

Chicago Teachers Union leadership gave its 825 members of the House of Delegates an update on negotiations behind closed doors on Tuesday evening. It marked the first time since the strike began that the delegates met.

“Our members have resolve and will not relent when it comes to the families they serve,” she warned Lightfoot, for whom the strike represents the first major political test since election in April.

The third-largest school district in the United States has canceled classes for its 300,000 students every school day since the union went on strike on Oct. 17, after contract talks failed to yield agreement.

The union represents 25,000 teachers who have been without a contract since July 1. Since the first day of the work stoppage, teachers have picketed in front of many of the district’s 500 schools and rallied several times in downtown Chicago.

“We are hopeful and we are close, really close to a deal,” said Allison Bates, 43, an elementary school science and social studies teacher who serves as a union delegate.

“We have gotten most of what we asked for but there probably needs to be some compromises from both sides,” said Bates as she huddled with a handful of other picketing teachers under a tent as it rained in front of her North Side school on Wednesday morning.

The union is seeking for a contract that runs three years instead of five and more paid prep-time for elementary school teachers.

Lightfoot said she and Chicago Public Schools Chief Executive Officer Janice Jackson met with union leadership for more than three hours on Tuesday, but both sides did not come to a resolution.

“We made some movement to try to get a deal done and I was deeply disappointed that with that movement … they would not take the deal,” she said during a news conference.

District officials said on Tuesday they had proposed to spend $25 million to reduce overcrowding in the district and a further $70 million to hire support staff, such as nurses and social workers.

Lightfoot has said the district could not afford the union’s full demands, estimating they would cost an extra $2.4 billion each year for an increase of more than 30% in the current school budget of $7.7 billion.

Prepare to study in Canada
Study permit: Who can apply
What You Should Know About Targeted Express Entry Draws in 2023
Aircraft Assemblers Can Now Immigrate To Canada Through Express Entry
Here Are The Top 15 Jobs In Canada For 2023
Manitoba PNP Draw: Province Invites 336 Canada Immigration Candidates
Why Province Approved Immigrants Are Free to Move Anywhere in Canada