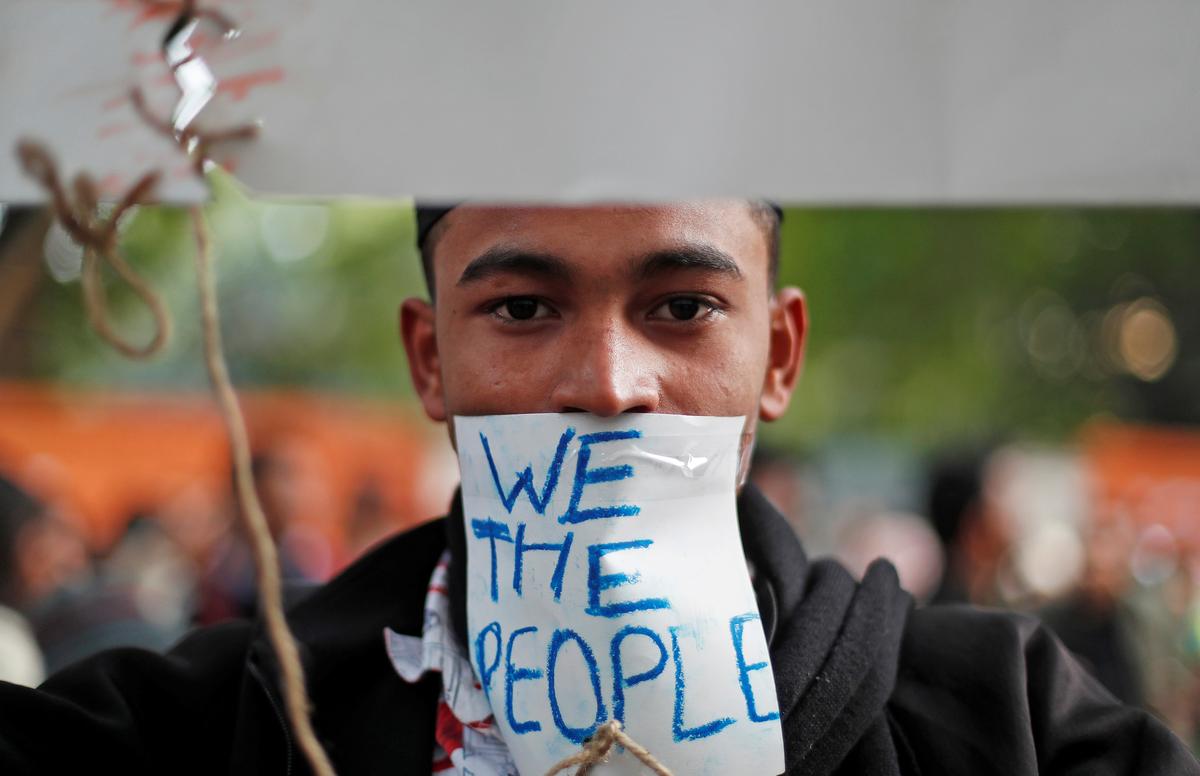 KOLKATA/LUCKNOW (Reuters) – Demonstrators in eastern India set fire to more than a dozen buses and vandalized at least six railway stations on Saturday, as violent protests against a new citizenship law continued for a fourth straight day.

A protester attends a protest against the Citizenship Amendment Bill, that seeks to give citizenship to religious minorities persecuted in neighbouring Muslim countries, in New Delhi, India, December 14, 2019. REUTERS/Adnan Abidi

Prime Minister Narendra Modi’s government says the new law will save religious minorities such as Hindus and Christians from persecution in neighboring Bangladesh, Pakistan and Afghanistan by offering them a path to Indian citizenship. But critics say the law, which does not make the same provision for Muslims, weakens the secular foundations of India.

The law’s enactment has stirred up protests across India, but the eastern part of the country, where movements against Bangladeshi immigrants have raged for decades, has been among the worst hit.

At least half a dozen railway stations in the state were vandalized and set on fire, leading to the cancellation of many long-distance trains, Sanjoy Ghosh, chief public relations Officer at South Eastern Railway told Reuters, adding it was difficult to say when normal services would resume.

In India’s most populous Uttar Pradesh state, in the north of the country, students at the Aligarh Muslim University (AMU), a prominent institution set up in 1920, protested against the citizenship law and were mobilizing Muslims via doorstep invitations for a bigger protest on Sunday.

“With the passing of this bill the Muslim community is scared and this bill, which is now a law, is discriminatory in nature,” said Sharjeel Usmani, an undergraduate student at AMU. “We will protest against it till it is taken back.”

Protests were also staged in several other towns and cities of Uttar Pradesh, including in the Hindu holy city of Prayagraj, whose former name Allahabad was changed by the state’s Hindu nationalist government in 2018.

In the heart of India’s capital New Delhi, hundreds of students gathered within and outside the gates of the Jamia Milia University, making speeches and holding peaceful protests against the citizenship law amid a heavy police presence.

The university on Saturday also declared a 20-day winter break beginning Dec. 16, according to an official notice reviewed by Reuters.

The annual break at Jamia usually begins around Dec. 24 and the decision to go on an early break was taken due to the student protests, a Jamia staff member said, declining to be named.