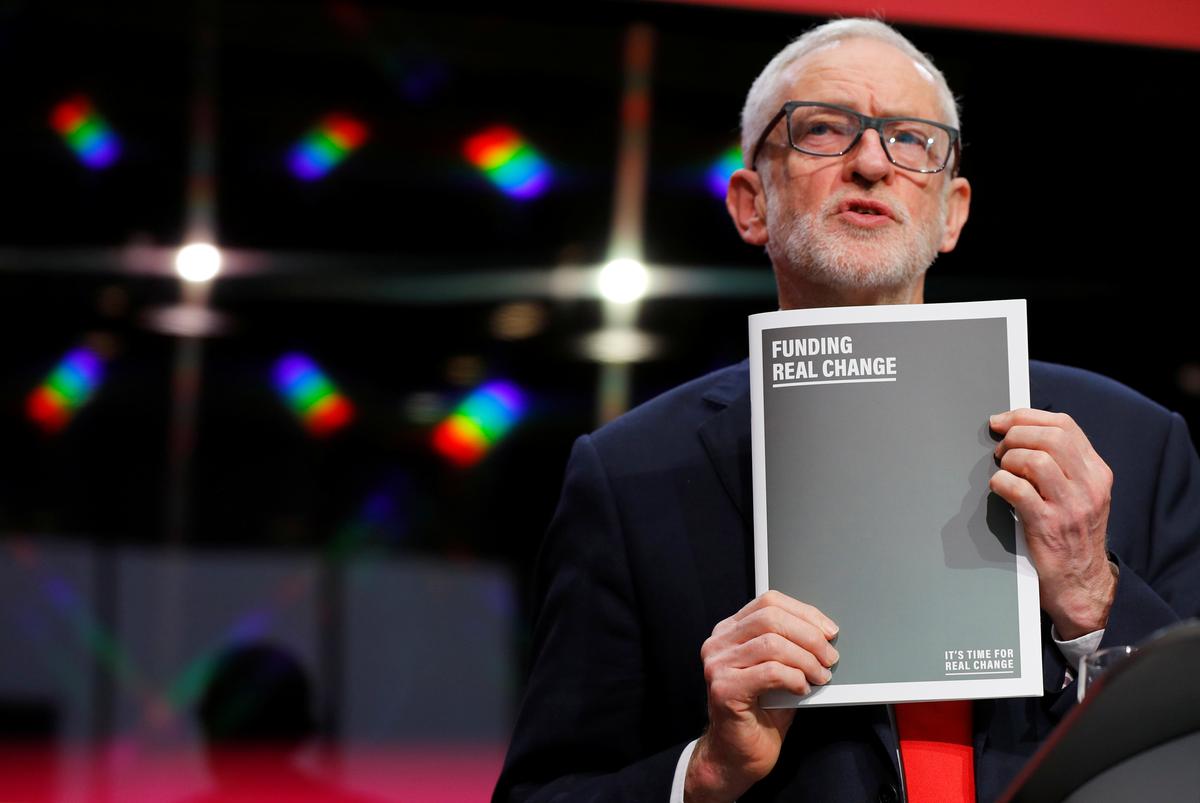 LONDON (Reuters) – Britain’s opposition Labour Party will hold a rally outside an Amazon depot on Saturday as it highlights its promise to target multinational firms it accuses of dodging taxes and cheating workers should it win next month’s election.

FILE PHOTO: Leader of the Labour Party Jeremy Corbyn speaks at the launch of the party manifesto in Birmingham, Britain November 21, 2019. REUTERS/Phil Noble

In its manifesto launched on Thursday, Labour unveiled a plan to spend almost 83 billion pounds on a program of widespread nationalization and free public services with the revenue coming from taxes on high earners and corporations.

Labour said its “Fair Tax Programme” would ensure the City of London financial district, big businesses and those who dodged tax paid their share.

“Huge multinational companies often act as if the rules we all live by don’t apply to them. They use loopholes to claim they don’t owe tax and cynically push their workers to the limit,” Labour leader Jeremy Corbyn will say outside the Amazon (AMZN.O) depot in Yorkshire, northern England.

“The next Labour government will challenge head-on the tax and wage cheat culture of so many multinational companies, who use their power and our weak laws to rip off both the taxpayer and their workers,” Corbyn will say, according to extracts released by his office.

“The government wrote the tax laws and they are designed to encourage investment, and we are investing heavily in creating jobs and infrastructure across the UK – more than 18 billion pounds ($23 billion) since 2010,” an Amazon spokesperson said in a statement.

Labour is lagging Prime Minister Boris Johnson’s Conservative Party by about 10 points or more in the polls but it hopes that targeting “vested interests” will win over voters ahead of the Dec. 12 election.

The party has earmarked tech firms such as Amazon, Alphabet’s Google (GOOGL.O), and Facebook (FB.O) for additional taxes, saying it would bring in measures to stop multinationals avoiding tax through profit-shifting schemes. It said this would bring in 6.3 billion pounds in 2023-4.

Other planned measures include establishing an inquiry into the finance sector, introducing a 20% Offshore Company Property Levy, and scrapping non-domiciled status which allows some people resident in Britain to limit the tax they pay.