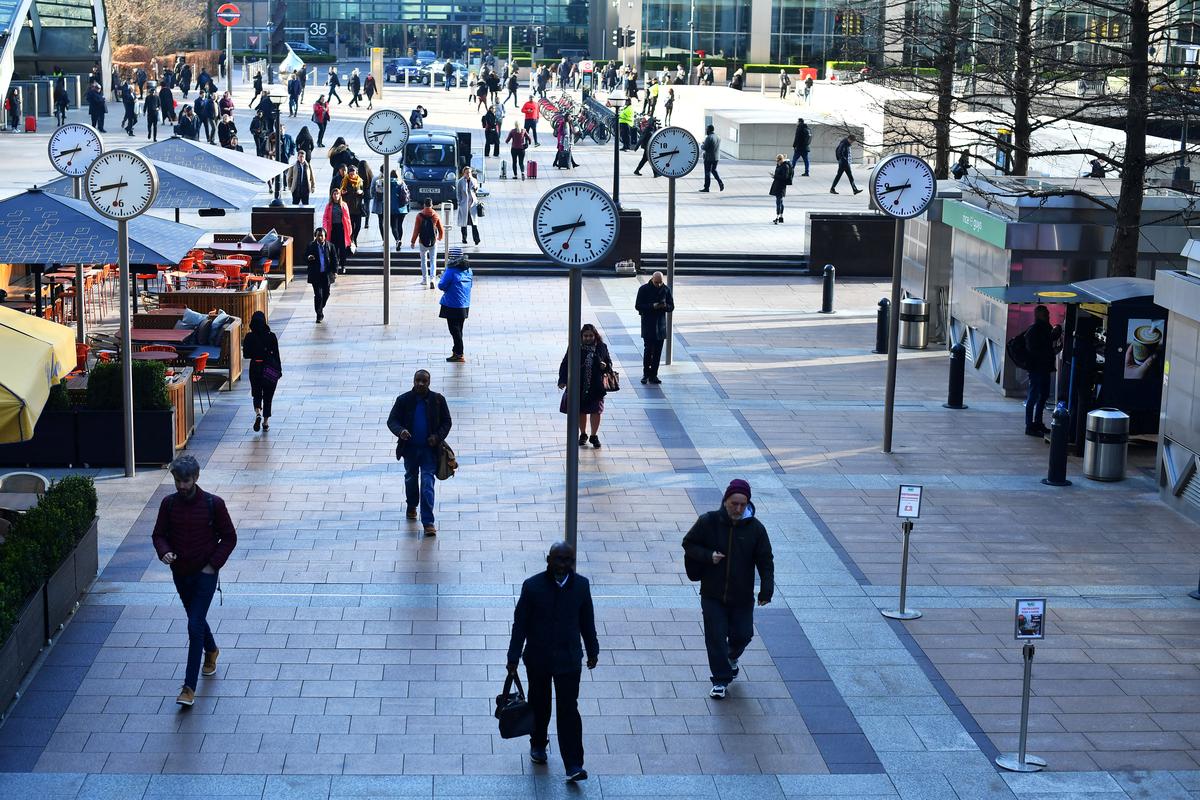 LONDON (Reuters) – Britain will unveil more help for businesses hurt by the coronavirus outbreak on Tuesday after the government told people to avoid pubs, clubs, restaurants, cinemas and theatres, raising the risk of companies collapsing.

Commuters walk through Canary Wharf, as the number of coronavirus cases grow around the world, in London, Britain March 16, 2020. REUTERS/Dylan Martinez

Finance minister Rishi Sunak, who last week announced support for business alongside emergency moves by the Bank of England, is expected to announce new measures at a daily government news conference, a ministry source said.

In his first budget statement to parliament last week, Sunak promised 30 billion pounds ($37 billion) of measures to support public healthcare, affected businesses and provide broader economic stimulus in the face of the coronavirus.

Britain’s independent budget office said there was a “very good argument” for the government to act as insurer against coronavirus losses and any attempt to forecast what would happen to the economy in the next year or two was “pie in the sky”.

Suspension of tax bills would be the most useful immediate step, he said.

French President Emmanuel Macron said his government would guarantee 300 billion euros worth of loans, and promised that no French company would be allowed to collapse.

British companies have already been hit by the latest crisis. The world’s biggest catering firm Compass Group (CPG.L) warned on Tuesday that its half-yearly operating profit would be lower than expected.

Johnson is under pressure to clarify whether he plans to formally order pubs and theatres to close after telling the public to avoid these businesses.

Business owners said the announcement would destroy demand, but unless the government mandated their closure they would be unable to claim on insurance policies.

“You can’t tell the nation to avoid ‘pubs and clubs’ and not officially ‘close us’ so that we can claim our insurance. Please help,” said Fraser Carruthers, who co-owns nightclubs, including Mahiki, which was popular with younger members of the royal family.

Emma McClarkin, chief executive of the British Beer and Pub Association, said the pub industry would be lost within days without government help.

The City Pub Group, which owns pubs across Britain, set out a range of cost-saving measures such as cutting sports shown in pubs and trading hours.

New Bank of England Governor Andrew Bailey promised more “prompt action” on Monday, less than a week after an emergency rate cut by the BoE as the scale of the coronavirus hit to the economy became clearer.

Investors are watching for another rate cut, possibly before the BoE’s next scheduled announcement on March 26, even though its room for manoeuvre has been reduced by last week’s action when its benchmark lending rate was cut to 0.25%.

“We expect more easing on the monetary and fiscal fronts,” JP Morgan economist Allan Monks said. “These actions will cushion the economic hit rather than meaningfully offset it.”