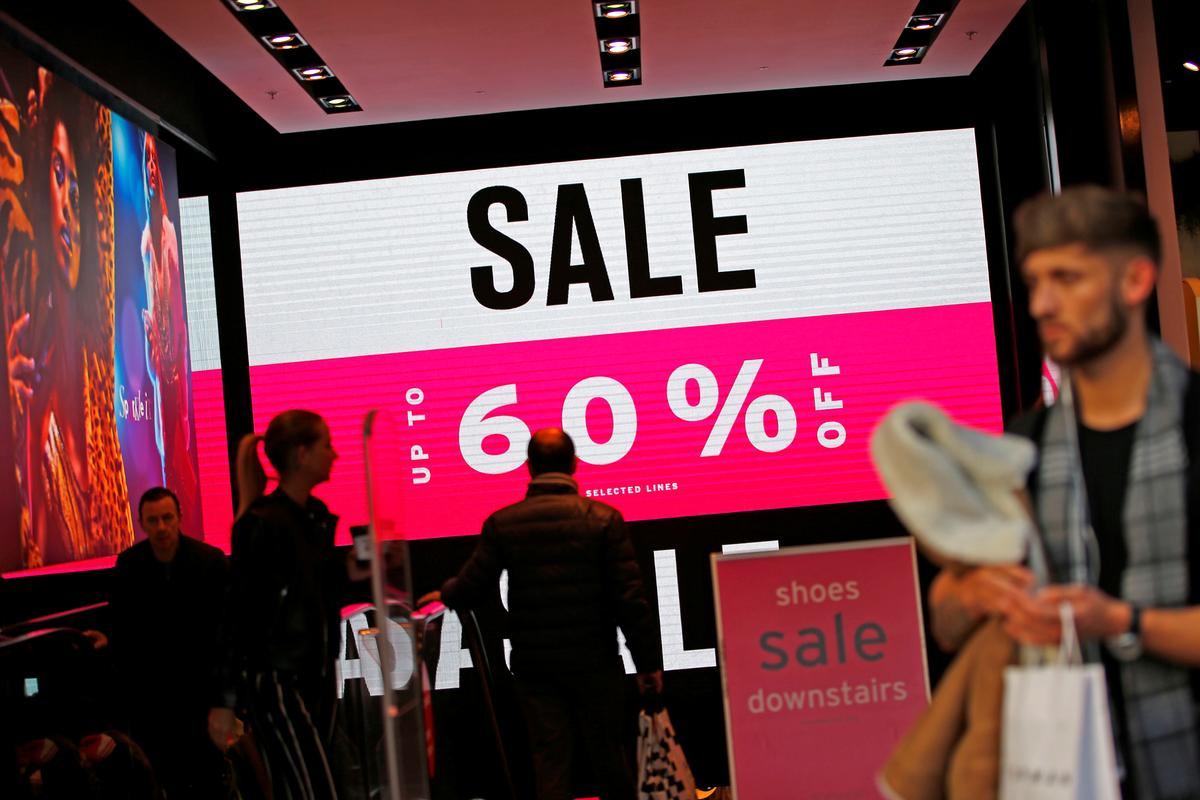 LONDON (Reuters) – British shoppers grew more cautious about their spending in the three months to September despite rising wages, official figures showed on Thursday, raising concerns about the health of the economy in the run-up to Brexit.

Consumer spending has been the biggest driver of British economic growth since June 2016’s referendum to leave the European Union, but there have been increasing signs that this is starting to soften.

Looking at the third quarter as a whole, which strips out monthly volatility, quarterly sales growth held steady at 0.6% while the annual pace of expansion dropped to 3.1% from 3.6% in the second quarter, the weakest since the late 2018.

Stripping out inflation adjustments, growth in retail spending was the weakest in more than three years.

Sterling showed little reaction to the data, with markets focused on whether Prime Minister Boris Johnson can broker a Brexit deal that is acceptable both to Brussels and Britain’s parliament before the country is due to leave on Oct. 31.

“September’s retail sales figures were perhaps a bit of a relief given the intense Brexit uncertainty, but were hardly a picture of strength,” economist Ruth Gregory of consultancy Capital Economics said.

Monthly retail sales volumes were flat in September and annual sales growth picked up to 3.1% from a weak 2.6% in August, the Office for National Statistics said – slightly less of a recovery than economists had forecast in a Reuters poll.

“Food shops bounced back after a weak few months, but there was yet more bad news for department stores, with sales continuing to fall in September,” ONS statistician Rhian Murphy said.

Some retailers said unusually rainy weather had hurt demand too, the ONS added.

Sales in the ‘non-specialised stores’ category – which includes department stores – dropped by an annual 2.0% in the third quarter, the biggest decline since the first three months of 2009 when Britain was mired in recession.

At the start of this month, major retailer John Lewis Partnership said it would cut a third of senior managers and merge its supermarket and department store divisions to better tackle challenges from online stores.

The lacklustre ONS figures are less bleak than a British Retail Consortium survey that showed the biggest fall in retail spending of any September since at least the mid-1990s.

In recent months, surveys by the BRC and Confederation of British Industry have painted a weaker picture of the retail sector than subsequent official data – in part due to the former focusing more on large high-street chains.

The ONS data has a broader sample that includes more online and small retailers, and its measure of retail spending showed annual growth slowing to 3.5% in the third quarter from 4.1% in the second quarter, the weakest since the second quarter of 2016.

Until recently consumers appeared to have largely taken Brexit in their stride, helped by weaker inflation and stronger growth in wages which are rising at the fastest pace in more than a decade.

That has aided the world’s fifth-biggest economy at a time when many companies have been cutting back on investment because of uncertainty about Brexit.

A separate Bank of England survey on Thursday showed British lenders expect business loans will dry up in the next few months at the fastest rate since the financial crisis, boding poorly for investment as Brexit nears.

There have also been signs that consumers are turning more cautious as Britain’s political crisis drags on.

But clothing retailer Next (NXT.L) attributed a disappointing start to autumn trading to unusually warm weather in parts of Britain, rather than shoppers holding back on buying new items because of Brexit.