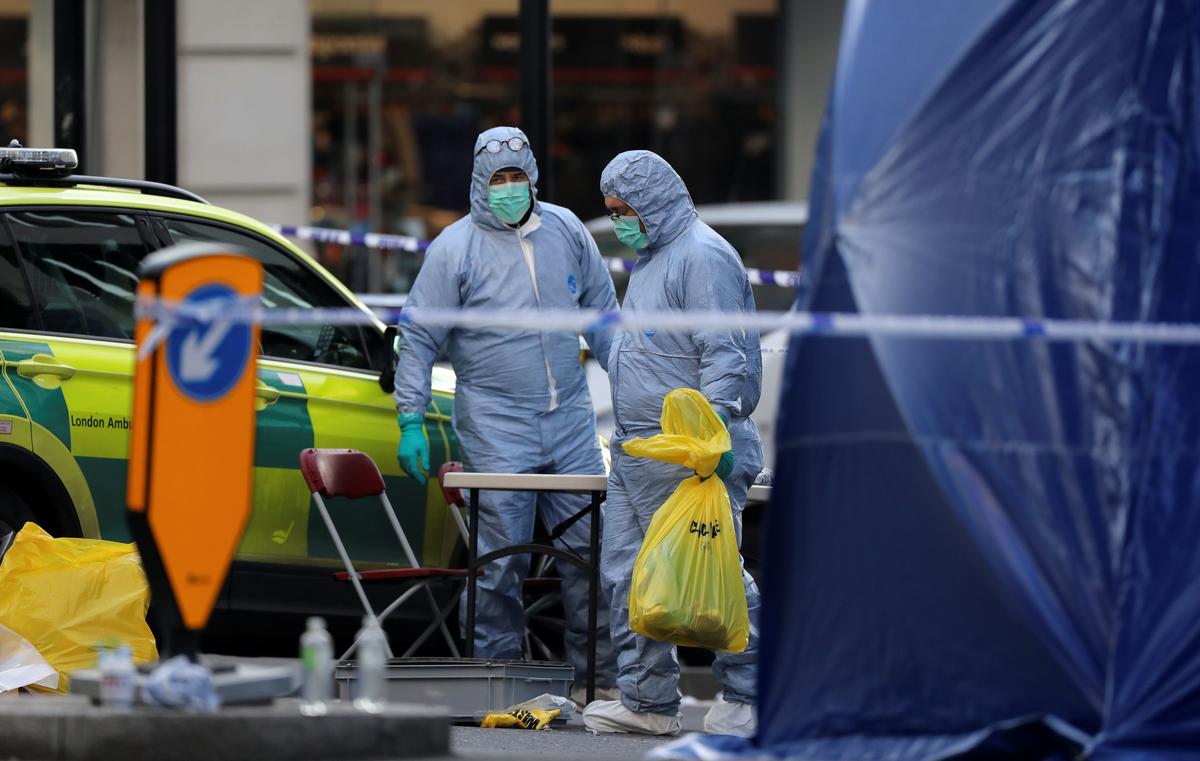 LONDON (Reuters) – Britain’s opposition criticized the government’s sentencing policies on Saturday after police said the London Bridge attacker had previously been convicted of terrorism offences but freed early from jail.

Usman Khan, wearing a fake suicide vest and wielding knives, went on the rampage at a conference on criminal rehabilitation beside London Bridge on Friday, killing two people, 13 days before a snap British election.

The 28-year old Briton, who was wrestled to the ground by bystanders and then shot dead by police, was convicted in 2012 for his part in an al Qaeda-inspired plot to blow up the London Stock Exchange. He was released in December 2018 subject to conditions.

“There’s got to be a very full investigation,” said Corbyn who is seeking to depose Prime Minister Boris Johnson in the election on Dec. 12 but trails in opinion polls.

“I think there is also a question about what the probation service were doing…and whether the parole board should have been involved in deciding whether or not he should have been allowed to be released from prison in the first place,” he said.

Earlier, Johnson said the London Bridge attack was a terrorist act and vowed to end a practice whereby serious offenders can be automatically let out of prison early.

“I have long said that this system simply isn’t working,” he said after visiting the scene of the attack on Saturday.

A man and a women were killed in the attack, with local media naming one of the victims as Jack Merritt, a course coordinator for Learning Together, a prisoners’ rehabilitation program which held the conference at Fishmongers’ Hall.

Three people remain in hospital with two victims in a stable condition while a third person is suffering from less serious injuries, according to the National Health Service.

Forensic officers work at the scene of a stabbing on London Bridge, in which two people were killed, in London, Britain, November 30, 2019. REUTERS/Simon Dawson

Police said they were continuing their investigation by searching an address in Stafford and the Stoke areas of central England, with the country’s top counter-terrorism officer saying they were not looking for any other suspects.

“We have found no evidence to suggest anybody else was involved in this attack,” said Neil Basu.

London Bridge was the scene of an attack during the 2017 election when three militants drove a van into pedestrians and then attacked people in the surrounding area, killing eight people and injuring at least 48.

Islamic State said its fighters were responsible for that attack, but the British authorities have cast doubt on those claims. The 2017 attack focused attention on cuts to policing since the ruling Conservatives took power in 2010.

Friday’s attack prompted a pause in election campaigning, but scaled-back activities resumed on Saturday, ahead of the election that could decide the fate of Brexit.

Law and order is now likely to feature more prominently in the campaign in the coming days.

The Conservatives could fail to win an overall majority during next month’s election according to a BMG poll published on Saturday, conducted before the attack. It showed their lead over Labour had fallen to six points from 13 a week ago.

On Saturday, Queen Elizabeth sent her sympathies to those affected by the attack and praised those who intervened to thwart the assailant.

“I express my enduring thanks to the police and emergency services, as well as the brave individuals who put their own lives at risk to selflessly help and protect others,” she said.