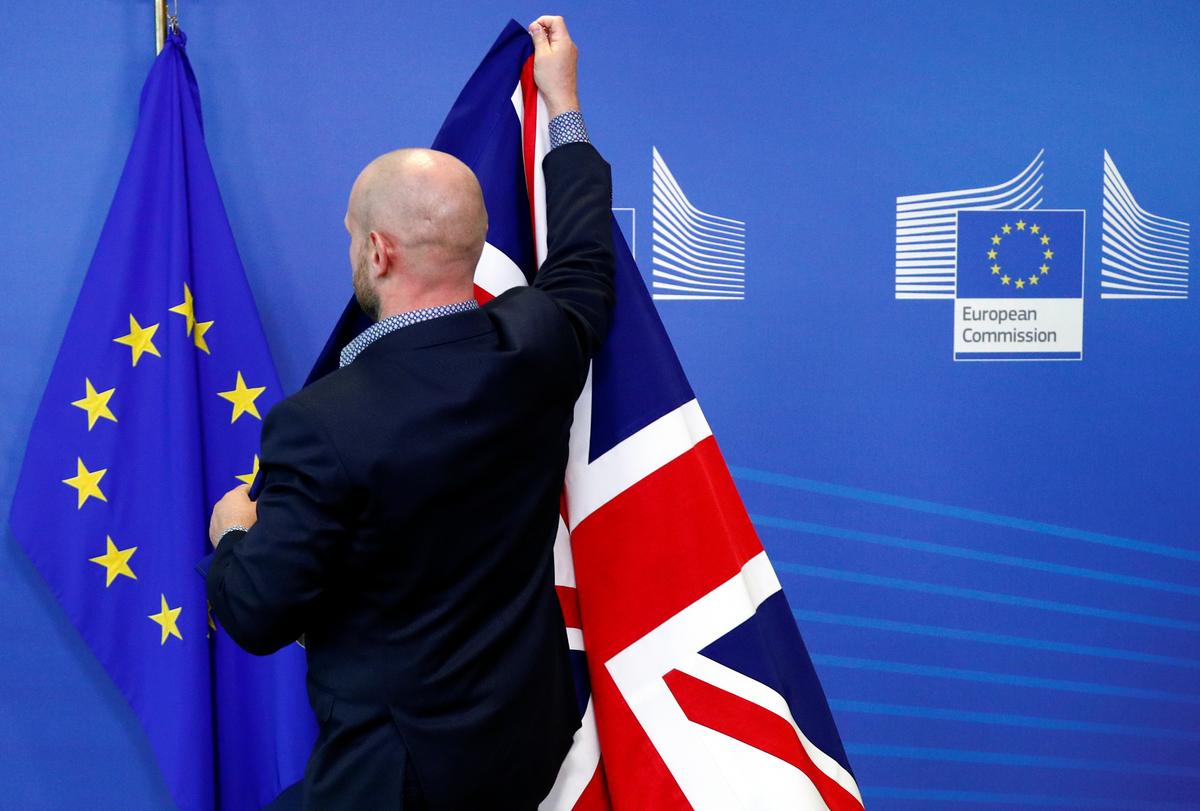 LONDON (Reuters) – Britain will be on course for more distant economic ties with the European Union, making the country poorer, if Prime Minister Boris Johnson wins parliamentary backing for the Brexit deal he clinched with Brussels on Thursday.

A staff member hangs a Union Jack next to an EU flag ahead of a meeting of European Commission President Jean-Claude Juncker and Britain’s Prime Minister Boris Johnson at the sidelines of the European Union leaders summit, in Brussels, Belgium October 17, 2019. REUTERS/Francois Lenoir

Compared with the deal his predecessor Theresa May reached last year – which parliament rejected three times – Johnson’s deal aims for less regulatory alignment with the EU, and greater trade barriers between Britain and its largest trading partner.

Johnson now faces a fight to convince parliament, where his Conservative Party lacks a majority, to approve the deal in a vote due to take place on Saturday.

“Even if Boris Johnson does manage to close the deal, investor celebration of this might soon be dampened by the recognition that this is a fairly hard Brexit,” said Paul O’Connor, a fund manager at Janus Henderson.

Britain’s finance ministry and almost all external economists have forecast that increased trade barriers will cause the British economy to grow more slowly than if it were to stay in the EU, and the damage increases as trade barriers rise.

Based on what was known of Johnson’s plans last week, UK in a Changing Europe estimated that they would make Britons more than 6% poorer on a per capita basis than staying in the EU – equivalent to 2,000 pounds ($2,570) per year in the medium term.

May’s deal would have reduced income by just under 5% per head, while a so-called no-deal Brexit – which would leave Britain trading purely on World Trade Organization terms – would lower incomes by just over 8%.

“This is more damaging than Theresa May’s Brexit in terms of economic impact,” said Anand Menon, UK in a Changing Europe’s director.

Menon said he did not think these estimates needed to be changed significantly, based on the final deal reached on Thursday. He expected Johnson to push back against the ‘level playing field’ requirements on regulatory alignment that the EU wants to be a condition for a close future trading relationship.

By contrast, the opposition Labour Party has said it would seek a closer trading relationship with more alignment with EU rules on the environment and worker protections if it was in charge of talks after Britain left the EU.

If Britain leaves the EU on Oct. 31, as scheduled, Johnson’s agreement ensures a transition period lasting until at least the end of 2020 during which there will be no big economic change.

This period can be extended until the end of 2022, while Britain and the EU negotiate a new trade arrangement with fewer shared rules and new restrictions on cross-border trade in goods and services.

Financial markets have reacted positively to the deal, as it lowers the risk of a disruptive no-deal Brexit.

But Dean Turner, an economist with UBS Wealth Management, said that although it might give a brief fillip to British growth, there was too much uncertainty about the longer-term trading environment to revive moribund business investment.

“I wouldn’t be getting the flags out just yet,” he said. “I think we will see a little bump in activity, but not anything that will be meaningful enough to get the UK out of a weak growth trend.”

The Centre for European Reform estimated that Britain’s economy was already nearly 3% smaller than it would have been if it had voted to stay in the EU in June 2016’s referendum.

While the bulk of the Johnson deal was seen as largely the same as that agreed between the EU and May, analysts noted that May’s aspirations for a close future trading arrangement had been watered down in the political declaration accompanying it.

Whereas the May version aspired to “as close as possible” a future trading relationship with the EU, that line was replaced by merely “ambitious” in the revised text.

“Theresa May’s deal would have ended up in a softer arrangement than just a free trade agreement,” Alex Stojanovic of the Institute for Government said.

“This government appears to want an FTA and that is very different: that means there would still be regulatory barriers particularly in goods between Great Britain and the EU.”

But the revision made this more explicit, she said. British regulators have said they do not want to become ‘rule takers’ rather than rulemakers after Brexit, increasing the chance of divergence and barriers between British and EU financial services markets.

Stojanovic added that Britain’s new freedom to sign its own bilateral trade deals around the world was unlikely to offset the lost economic activity.

“If the UK did a deal with everybody … it would benefit in 15 years the UK GDP by 0.2%. Most free trade agreements do not benefit GDP very much.”