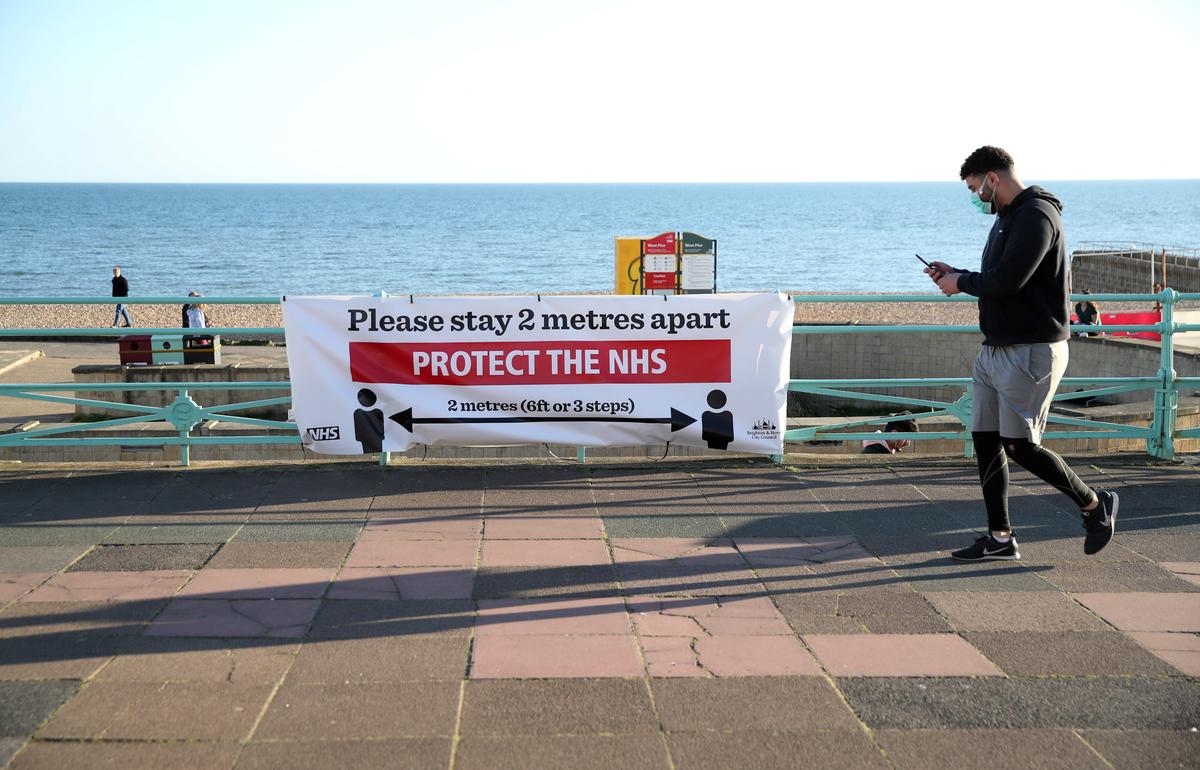 LONDON (Reuters) – High fatalities from the coronavirus will continue in the United Kingdom for at least another week or two even if people comply with stringent isolation measures, health authorities said on Saturday as the country’s death toll jumped to 4,313.

A man wearing a face mask walks next to a banner showing support for the NHS, as the spread of the coronavirus disease (COVID-19) continues, Brighton, Britain, April 4, 2020. REUTERS/Peter Cziborra

The toll went up by 708 in 24 hours, the highest daily rise so far in Britain. A 5-year-old child with an underlying health problem was among the dead, along with at least 40 who had no known previous known conditions.

“With great sadness the number of deaths continues to be high,” Stephen Powis, the national medical director of the English health service, said at a Downing Street news conference.

“Unfortunately that is likely to continue over the next week or two until we get on top and stop this virus,” Powis said.

The government has put Britain into a widespread shutdown, closing pubs, restaurants and nearly all shops, while ordering people to stay home unless it is absolutely essential to venture out.

Cabinet Office minister Michael Gove repeatedly declined to say when the lockdown could be lifted but said it would depend on whether people adhered to the stringent rules.

The lockdown began nearly two weeks ago, with a pledge to review the measures after three weeks.

“If we relax our adherence to the rules we increase the risk for others,” he said, offering his condolences to the family of the 5-year-old.

Britain initially took a restrained approach on tactics to curb the spread but Prime Minister Boris Johnson changed tack and imposed stringent social-distancing measures after modelling showed a quarter of a million people in the country could die.

Johnson has himself been in self-isolation after testing positive for the novel coronavirus. His pregnant fiancee, Carrie Symonds, said on Twitter she had spent the past week in bed with symptoms but was now feeling better.

“I’ve spent the past week in bed with the main symptoms of Coronavirus. I haven’t needed to be tested and, after seven days of rest, I feel stronger and I’m on the mend,” Symonds said.

Countries around the world are grappling with tens of thousands of coronavirus deaths and more than a million cases. But the massive efforts to contain the spread have virtually stalled the economy and some have started to question if a global depression will cost more lives in the long run.

British health officials have said the peak of the deaths could come on Easter Sunday, April 12, and Powis told a news conference that new cases had stabilised in recent days.

Hospital admissions also plateaued in London, the epicentre of the British outbreak, while increasing in the Midlands and the north west of England. As of 0800 GMT on Saturday, some 41,903 people had tested positive out of a total of 183,190 people tested.

Neil Ferguson, a government adviser and professor of mathematical biology at Imperial College London, said the lockdown was unlikely to be lifted until the end of May.

“We want to move to a situation where at least by the end of May we’re able to substitute some less intensive measures, more based on technology and testing, for the complete lockdown we have now,” he told BBC Radio.

However a second government adviser, the chief pandemic modeller Graham Medley, said he feared Britain had painted itself into a corner, with no clear exit from a strategy that would damage the economic and mental well-being of many people.

Almost one million people have applied for welfare benefits in just two weeks in Britain. Some major investment banks have cautioned that the world economy is set for the worst contraction since World War Two.

“In broad terms are we going to continue to harm children to protect vulnerable people, or not?” Medley said.