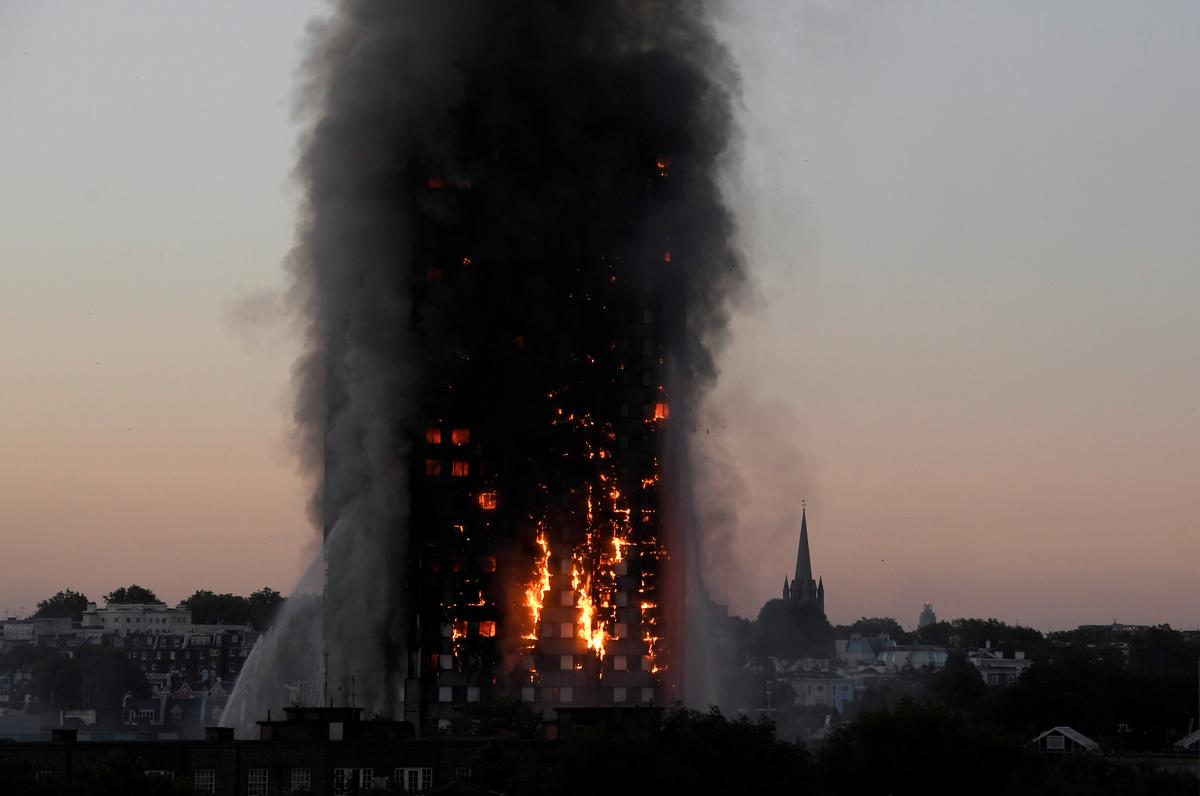 LONDON (Reuters) – Two years after a fire killed 71 people at London’s Grenfell Tower, insurance premiums for building contractors, architects and surveyors have surged by as much as several hundred percent, risking future projects, industry sources say. Combustible materials used to refurbish Grenfell were central to the chain of events in June 2017 that turned an ordinary kitchen fire into an inferno, an official inquiry said last month.

As a result, insurers are increasingly excluding cladding from professional indemnity (PI) policies which protect construction professionals against negligence claims.

“Professionals are finding it harder to access cover in the UK market and premiums are rising,” said one PI insurer, adding that “the range varies wildly – from 10% to well in excess of 100%”.

David Stocks, construction PI broker at Gallagher, said that for building contractors, rate increases could vary from 10% to 300-400%, though the average was 50-100%.

A spokeswoman for the Royal Institute of British Architects said “a doubling or tripling of premium is not uncommon”.

The difficulties of finding insurance could affect refurbishment and construction projects, including government targets to increase housebuilding, the sources said.

“We are reaching a point where I am really fearful that if a building has fire-resistant cladding issues, professionals will be reluctant, or even unable, to become involved,” said chartered surveyor Peter Vinden, chief executive of The Vinden Partnership.

A review of building regulations and fire safety in England in 2018 said the regulations were “not fit for purpose” and called for a “radical rethink” of the system.

Insurers are nervous about the interpretation of building regulations as a result, leading them “to question what they are actually insuring the construction sector for,” said Laura Hughes, manager, general insurance at the Association of British Insurers.

Some insurers have pulled out of the PI insurance market this year after several years of losses. The shortage of insurers has contributed to the rise in prices, sources said.

Britain’s International Underwriting Association last week set up a construction committee to work with the industry, government and regulators to address the lack of PI cover.

A spokeswoman for Britain’s housing ministry said the government was “exploring potential solutions” to the problem, but said she was unable to give more details ahead of UK elections next month.

The government introduced a ban in December 2018 on the use of combustible cladding in new or refurbished buildings above 18 meters high.

Insurers are asking clients to fill in more detailed questionnaires about cladding, and are in some cases cutting the limits of the cover they will provide or increasing the excess clients must pay.

In property insurance, the impact has been less severe but premiums for buildings with combustible cladding have risen 25-50% this year, compared with an average rise in property insurance rates of 5% or less, said David Williams, managing director for underwriting and technical services at AXA Insurance.