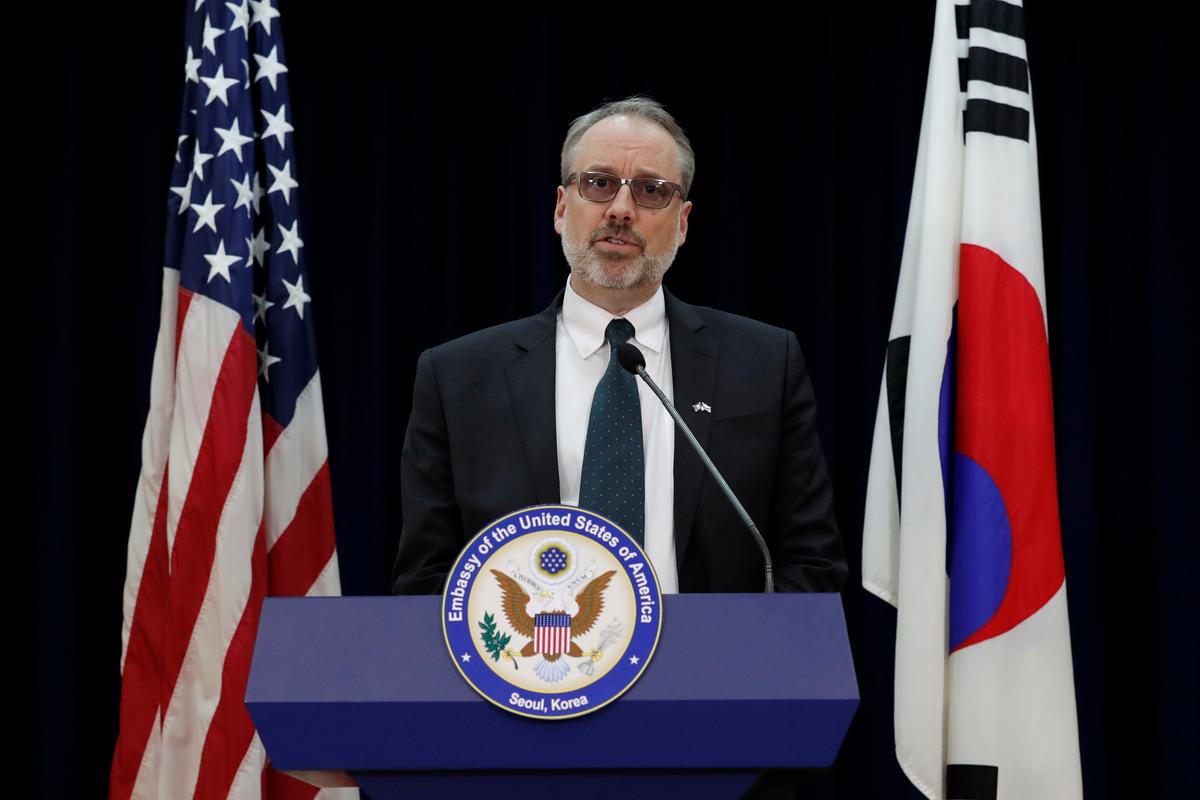 SEOUL (Reuters) – South Korean and U.S. officials broke off talks on Tuesday aimed at settling the cost burden for Seoul of hosting the U.S. military, South Korea’s Foreign Ministry said, amid a public backlash over a $5 billion U.S. demand for the bill.

James DeHart, U.S. Department of State’s a senior advisor for security negotiations and agreements bureau of political-military affairs, speaks after a meeting with South Korean counterpart on the Special Measures Agreement (SMA) at the public affairs section of the U.S. Embassy in Seoul, South Korea November 19, 2019. Lee Jin-man/Pool via REUTERS

The breakdown in talks was a sharp and rare public disagreement in the 66-year alliance, with each side suggesting the other was not prepared to come to a fair and reasonable compromise on sharing the costs for hosting 28,500 U.S. troops as a deterrent to North Korea.

“Our position is that it should be within the mutually acceptable Special Measures Agreement (SMA) framework that has been agreed upon by South Korea and the U.S. for the past 28 years,” South Korea’s Foreign Ministry said, referring to the cost-sharing deal’s official name.

“The U.S. believes that the share of defense spending should be increased significantly by creating a new category,” the ministry said in a statement.

The top U.S. negotiator, James DeHart, said the Americans cut short the talks to “give the Korean side some time to reconsider and I hope to put forward new proposals that would enable both sides to work toward a mutually acceptable agreement in the spirit of our great alliance.”

“Unfortunately, the proposals that were put forward by the Korean negotiating team were not responsive to our request for fair and equitable burden sharing,” DeHart told a briefing.

Negotiators left the table after only about one hour of discussions that were scheduled to continue throughout the day, South Korean media reported, citing unnamed foreign ministry officials.

South Korean lawmakers have said U.S. officials were seeking up to $5 billion a year, more than five times the 1.04 trillion won ($896 million) Seoul agreed to pay this year.

U.S. officials have not publicly confirmed the number, but Trump has previously said the U.S. military presence in and around South Korea was “$5 billion worth of protection”.

Trump has long railed against what he says are inadequate contributions from allies toward defense costs. The United States is due to begin separate negotiations for new defense cost-sharing deals with Japan, Germany and NATO next year.

Trump has floated the idea of pulling U.S. troops from the Korean peninsula, which remains in a technical state of war under a truce that suspended the 1950-53 Korean War.

South Korea’s Foreign Ministry declined to comment on what the new cost category U.S. sought was, but Yonhap news agency has reported the U.S. demand included labor costs for the U.S. troops in South Korea, military personnel and family support costs, costs of rotational deployment of U.S. troops to the Korean Peninsula, and offshore training expenses.

In past cost-sharing agreements, South Korea only paid for three categories – personnel costs of South Korean workers hired by U.S. troops, military construction costs such as building facilities within U.S. bases, and military assistance expenses, such as for services and materials.

The negotiations are taking place as U.S. efforts to reach an agreement with North Korea over its nuclear and missile programs appear stalled, ahead of a year-end deadline from Pyongyang for the U.S. to shift its approach.

Under South Korean law, the military cost-sharing deal must be approved by parliament.

Ruling party lawmakers have said this week they will “refuse to ratify any excessive outcome of the current negotiations” that deviate from the established principle and structure of previous agreements.

Prepare to study in Canada
Study permit: Who can apply
Alberta Invites 200 Candidates, Minimum CRS Of 324 In New Express Entry Draw
How You Could Immigrate To Canada Through The Start-Up Visa In 2023
US Plans to Lift Covid Emergency Declarations May 2023
Ontario Invites 10 Canada Immigration Candidates In New Entrepreneur Draw
What You Should Know About Targeted Express Entry Draws in 2023