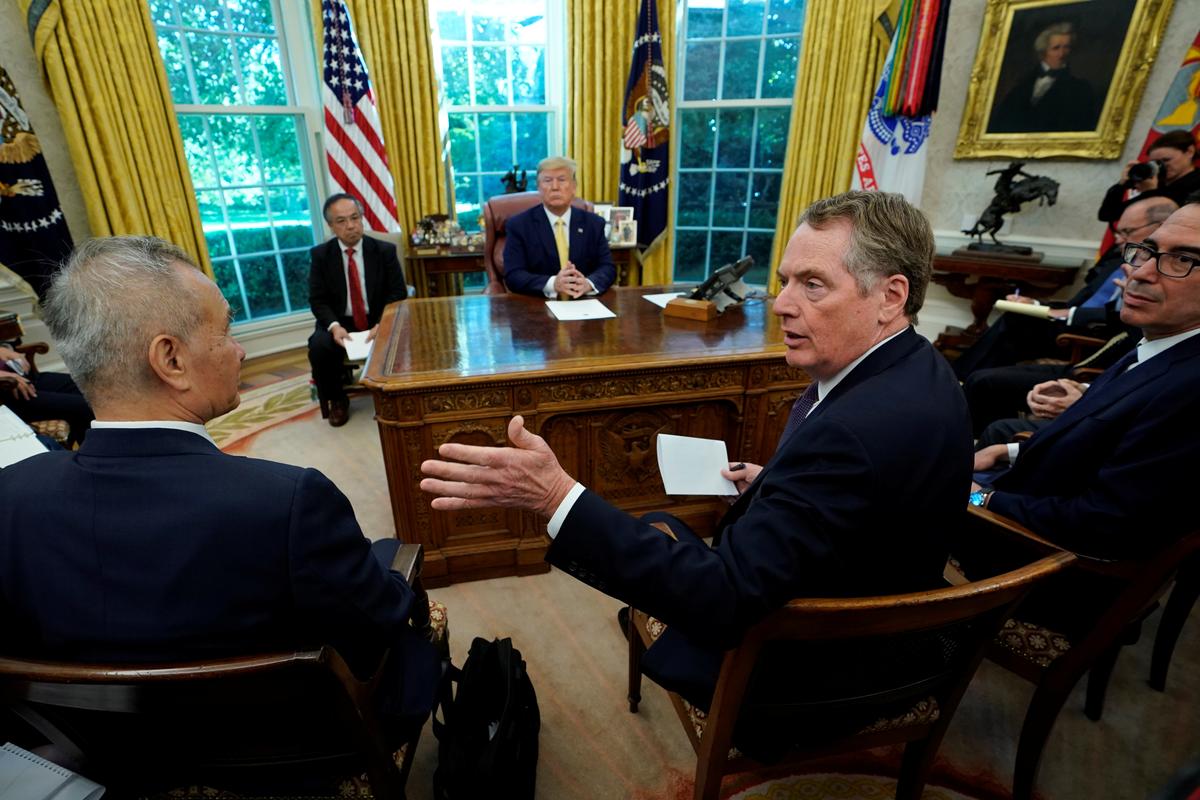 WASHINGTON (Reuters) – U.S. President Donald Trump on Friday outlined the first phase of a deal to end a trade war with China and suspended a threatened tariff hike, but officials on both sides said much more work needed to be done before an accord could be agreed.

The emerging deal, covering agriculture, currency and some aspects of intellectual property protections, would represent the biggest step by the two countries in 15 months to end a tariff tit-for-tat that has hit financial markets and slowed global growth.

But Friday’s announcement did not include many details and Trump said it could take up to five weeks to get a pact written. He acknowledged the agreement could fall apart during that period, though he expressed confidence that it would not.

“I think we have a fundamental understanding on the key issues. We’ve gone through a significant amount of paper, but there is more work to do,” U.S. Treasury Secretary Steven Mnuchin said as the two sides gathered with Trump at the White House. “We will not sign an agreement unless we get and can tell the president that this is on paper.”

With Chinese Vice Premier Liu He sitting across a desk from him in the Oval Office after two days of talks between negotiators, the president told reporters that the two sides were very close to ending their trade dispute.

“There was a lot of friction between the United States and China, and now it’s a lovefest. That’s a good thing,” he said.

Liu took a different tone in his remarks, however.

“We have made substantial progress in many fields. We are happy about it. We’ll continue to make efforts,” Liu said.

China’s official state-owned news organization Xinhua said that both sides “agreed to make the efforts towards a final agreement.”

Trump, who is eager to show farmers in political swing states that he has their backs, lauded China for agreeing to buy as much as $50 billion in agricultural products. But he left tariffs on hundreds of billions of dollars of Chinese products in place.

His announcement, while seen as progress, drew some skepticism.

“I’m unsure that calling what was announced by President Trump an agreement is justified,” said Scott Kennedy, a China trade expert at the Center for Strategic and International Studies in Washington.

“If they couldn’t agree on a text, that must mean they’re not done. Wishing an agreement does not one make. This isn’t a skinny deal. It’s an invisible one.”

Mnuchin said the president had agreed not to proceed with a hike in tariffs to 30% from 25% on about $250 billion in Chinese goods that was supposed to have gone into effect on Tuesday.

But U.S. Trade Representative Robert Lighthizer said Trump had not made a decision about tariffs that were subject to go into effect in December.

“I think that we’re going to have a deal that’s a great deal that’s beyond tariffs,” Trump said.

U.S. Trade Representative Robert Lighthizer talks to China’s Vice Premier Liu He during a meeting with U.S. President Donald Trump in the Oval Office at the White House after two days of trade negotiations in Washington, U.S., October 11, 2019. REUTERS/Yuri Gripas

The world’s two largest economies have made progress in their trade dispute before without sealing a deal. In May U.S. officials accused China of walking away from a sweeping agreement that was nearly finished over a refusal to make changes to Chinese laws that would have ensured its enforceability.

Trump had said previously he would not be satisfied with a partial deal to resolve his effort to change China’s trade, intellectual property and industrial policy practices, which he argues cost millions of U.S. jobs. On Friday he said he had decided that a phased approach was appropriate.

U.S. stocks ended more than 1% higher on Friday but well off the day’s highs after the announcement, with the S&P 500 .SPX up 1.09% after rising as much as 1.7% earlier on hopes of an agreement.

Trump and Chinese President Xi Jinping are both scheduled to attend a Nov. 16 summit of the Asia Pacific Economic Cooperation countries in Santiago, Chile, and Trump hinted that a written agreement could be signed there.

There have been positive signs from China in recent days.

China’s securities regulator on Friday unveiled a firm timetable for scrapping foreign ownership limits in futures, securities and mutual fund companies for the first time. Increasing foreign access to the sector is among the U.S. demands at the trade talks.

Beijing previously said it would further open up its financial sector on its own terms and at its own pace.

On Thursday, the U.S. Department of Agriculture confirmed net sales of 142,172 tonnes of U.S. pork to China in the week ended Oct. 3, the largest weekly sale to the world’s top pork market on record.

The president said China had agreed to make purchases of $40 billion to $50 billion in U.S. agricultural goods. Mnuchin said the purchases would be scaled up to that amount annually.

The status of China’s Huawei Technologies Co Ltd, the world’s biggest telecoms gear maker, which has been put on a U.S. trade blacklist since May, was not part of the deal, Lighthizer said.

Trump said some IP issues would be left for later phases of the talks. He said talks over a second phase would begin as soon as the first phase agreement was signed and said a third phase might be necessary, too.

Additional reporting by Michael Martina in Beijing and Echo Wang in Washington; Writing by Jeff Mason and Sonya Hepinstall; Editing by Paul Simao and Alistair Bell

Prepare to study in Canada
Study permit: Who can apply
Quebec Releases Details Of Draw Issuing 1,000 Canada Immigration Invitations
Bus Drivers Can Now Immigrate To Canada Through Express Entry
British Columbia PNP Draws: Province Issues At Least 273 Canada Immigration Invitations
Alberta To Give PNP Preference To Immigrants With Family In Province
Here Are The Top 15 Jobs In Canada For 2023