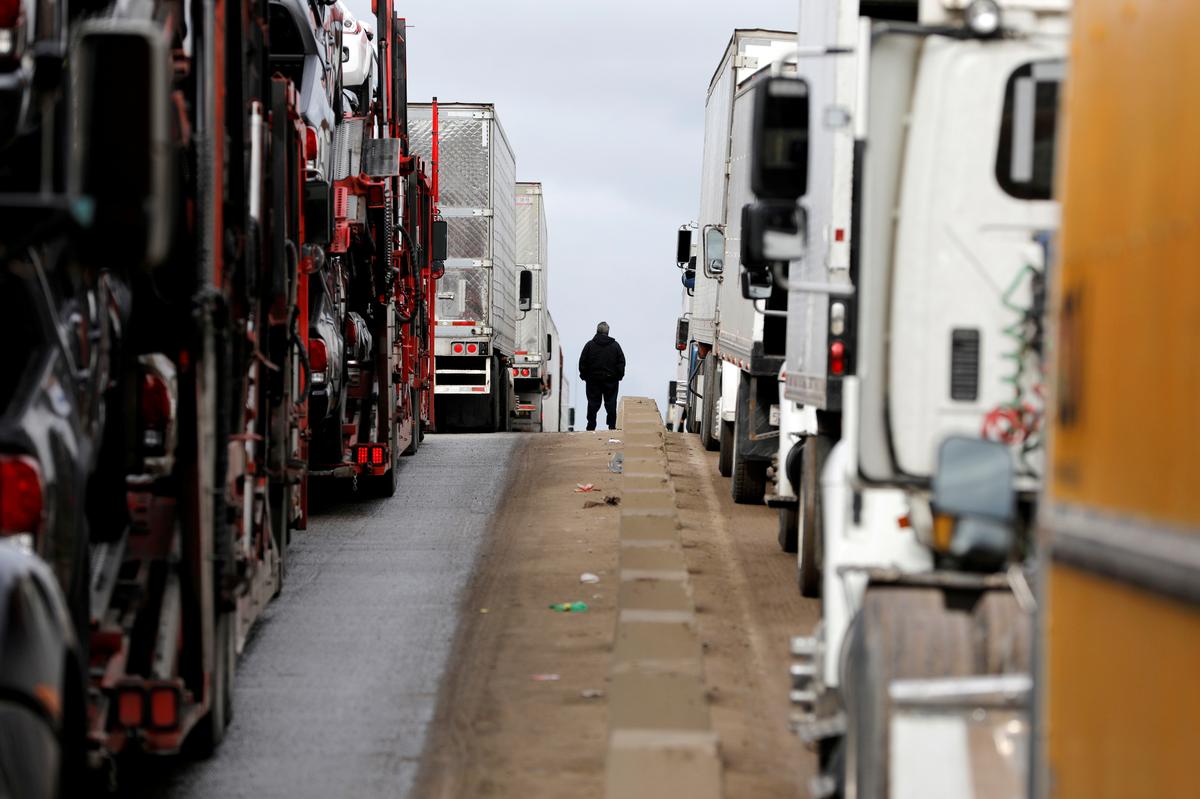 WASHINGTON/MEXICO CITY (Reuters) – The Trump administration, Mexico and U.S. Democrats on Monday closed in on a deal for labor-related changes to a languishing North American trade pact that may soon allow it to proceed to a vote, as the window for passage this year quickly narrows.

FILE PHOTO: A man stands between trucks waiting in a long queue at border customs control to cross into the U.S at the Otay border crossing in Tijuana, Mexico April 3, 2019. REUTERS/Carlos Jasso

U.S. Trade Representative Robert Lighthizer and White House senior adviser Jared Kushner are due to fly to Mexico City on Tuesday to try to pin down final details of the agreement, an administration official told Reuters late Monday afternoon.

Congressional aides and industry sources said that a proposed deal has been sent to U.S. House of Representatives Speaker Nancy Pelosi, who will make the final decision on whether and when to bring the U.S.-Mexico-Canada Agreement to a vote.

“We’re studying the proposal,” a senior Democratic aide told Reuters, adding that there was not yet an agreement to announce.

The USMCA, which would replace the 26-year-old North American Free Trade Agreement (NAFTA), encompasses $1.2 trillion in annual trade across the continent. Its backers say it is responsible for 12 million U.S. jobs and a third of all U.S. agricultural exports.

It needs to be approved by lawmakers in all three countries. In the United States, Democrats have so far been reluctant to stage a vote that would give a political victory to Republican President Donald Trump.

And time is running out for a vote before year end. Lawmakers from both parties said that waiting until next year could make it more difficult to ratify, because the presidential election campaign – and perhaps impeachment proceedings against Trump – will be in full swing.

Many on Capitol Hill were reluctant to declare that a deal had been struck. Since negotiations to replace NAFTA first started in August 2017, deals have been imminent numerous times, only to be delayed by last-minute hitches.

Leaders of the United States, Canada, and Mexico signed the initial USMCA agreement more than a year ago, but since then, Democrats controlling the House have pressed for changes to strengthen the enforcement of new labor standards and relax data protections for biologic drugs that they fear will mean higher drug prices.

Pelosi is scheduled to meet on Monday evening with senior House Democrats who have been working on changes to the pact, a Democratic House aide said.

Lighthizer last week also added a new demand – that the trade deal strengthen the automotive rules origin to include steel and aluminum that is “melted and poured” in North America.

The prior requirement that 70% of the steel and aluminum in North American cars come from the region did not specify a production method, opening the door to the used of semi-finished metals from China and elsewhere.

Trump, who blamed NAFTA for the loss of millions of American factory jobs during his 2016 re-election campaign and vowed to quit or renegotiate it, said Monday that “a lot of strides have been made over the last 24 hours” on USMCA.

Trump spoke earlier with AFL-CIO president Richard Trumka about the USMCA negotiations, a person familiar with the call said.

Trumka, one of the most powerful U.S. labor leaders, has been a major party to the negotiations, pushing for stronger labor enforcement provisions that ensure Mexican workers are allowed to unionize.

Trumka earlier told the Washington Post that there was a deal on USMCA that he was reviewing with his executive committee.

“We have pushed them hard and have done quite well,” Trumka was cited as saying by the Post.

Neither Trumka nor an AFL-CIO spokeswoman responded to queries about the pact or the phone call with Trump.

Details of the proposed changes have not been disclosed. Mexican officials rejected U.S. demands to allow U.S. factory inspectors to supervise labor enforcement, but have said that Mexico would allow panels of experts and a third party to review labor standards.

Mexican President Andres Manuel Lopez Obrador on Monday said that Mexican senators had endorsed changes to USMCA that had been accepted by Mexico. He urged Pelosi to move forward with a vote on the trade deal.

Congress had been scheduled to leave Washington by the end of this week, but consideration of spending and defense bills is likely to keep lawmakers working for a few more days beyond that.

“We have to bring this to an end,” Johns Hopkins University professor Jonathan Sands, who directs the university’s Center for Canadian Studies, said of USMCA approval. “Every part of the trade debate is up in the air right now, with the trade war on China and trade tensions with Europe ramping up.”

U.S.-China trade talks are set to come to a head this week. New U.S. tariffs on some $156 billion worth of Chinese consumer goods are due to take effect on Sunday unless an interim deal is reached before then.

Prepare to study in Canada
Study permit: Who can apply
Record-Setting Number Of Job Vacancies In Canada Leaves Employers Desperate For Workers
Alberta Invites 150 Candidates, Lowest CRS Of 306 In New Express Entry Draw
What Is A Canada Express Entry Profile?
British Columbia Issues 125 Canada Immigration Invitations In New Provincial Draw
How to Immigrate to Canada as a Business Development Officer