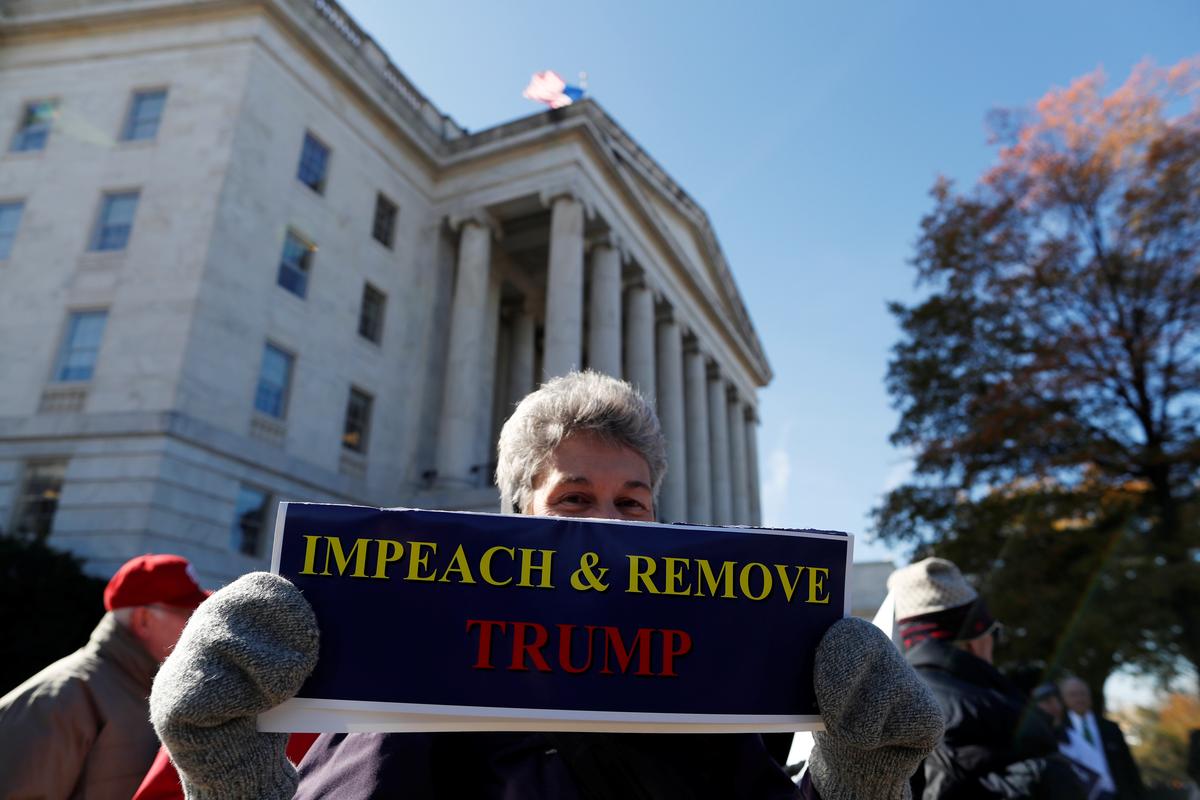 WASHINGTON (Reuters) – The U.S. House of Representatives Judiciary Committee on Tuesday invited President Donald Trump to its first impeachment hearing, scheduled for Dec. 4, starting a new phase of the inquiry that could lead to formal charges against the president within weeks.

Trump is not required to attend the hearing. But the move allows the president and his legal team access to congressional impeachment procedures that he and other Republicans have denounced as unfair, partly because the White House has not been able to call or cross-examine witnesses.

The House Intelligence Committee, which has led the impeachment investigation into Trump’s dealings with Ukraine through weeks of closed-door testimony and televised hearings, is expected to release a formal evidence report shortly after lawmakers return to Congress on Dec. 3 from their Thanksgiving recess.

The Judiciary panel will use the report to consider formal charges that it could recommend for a full House vote by mid-December. It gave Trump until 6 p.m. (2300 GMT) on Sunday to advise the committee on whether he would attend the hearing, and to indicate by then who would be his counsel.

The White House did not immediately respond to a request for comment.

Representative Jerrold Nadler, the Judiciary Committee’s Democratic chairman, told Trump in a letter that he was reminding the president that the committee’s rules allow him to attend the hearing and for his legal team to question witnesses.

The hearing, scheduled to begin at 10 a.m. (1500 GMT), will have legal experts, who have not yet been identified, as witnesses.

“The president has a choice to make: he can take this opportunity to be represented in the impeachment hearings, or he can stop complaining about the process,” Nadler said in a statement. “I hope that he chooses to participate.”

The impeachment probe is looking into whether Trump abused his power to pressure Ukraine to launch investigations of political rival Joe Biden and a discredited conspiracy theory promoted by Trump that Ukraine, not Russia, interfered in the 2016 U.S. presidential election.

In an interview on Tuesday with former Fox News host Bill O’Reilly, Trump denied he directed his personal lawyer, Rudy Giuliani, who had been pushing Ukraine for the investigations, to act on his behalf in trying to get Ukraine to help turn up dirt on his political rivals.

“No, I didn’t direct him, but he is a warrior,” Trump told O’Reilly, adding Giuliani “possibly saw something” and “he’s done work in Ukraine for years.”

Giuliani has said he conducted an investigation into corruption and possible collusion in Ukraine in his role as a defense attorney trying to clear Trump.

The inquiry centers on a July 25 phone call in which Trump asked Ukrainian President Volodymyr Zelenskiy to investigate Biden, now a leading Democratic presidential contender, and his son Hunter, who had worked for a Ukrainian energy company while his father was vice president under Democratic President Barack Obama.

Democrats have accused Trump of abusing his power by withholding $391 million in security aid to put pressure on a vulnerable U.S. ally to interfere in an American election by digging up dirt on his domestic political opponents.

Trump denies wrongdoing and has dismissed the inquiry as a sham by Democrats who want to overturn the result of the 2016 U.S. presidential election.

In his letter, Nadler said the hearing was intended as an opportunity to discuss the historical and constitutional basis of impeachment, as well as the meaning of terms like “high crimes and misdemeanors.”

“We will also discuss whether your alleged actions warrant the House’s exercising its authority to adopt articles of impeachment,” Nadler wrote.

House Republican Conference Chairwoman Liz Cheney tweeted that Democrats “have decided to give @realDonaldTrump the right to question liberal law professors, but not any fact witnesses. At all.”

The Democratic-led House is aiming to resolve the question of Trump’s impeachment before the end of the year, possibly by approving formal charges known as articles of impeachment and forwarding them to the Republican-controlled Senate for a trial that could begin in January.

A trial would determine whether Trump should be convicted and removed from office. But Senate Republicans have shown little inclination to remove Trump, their party’s leader, who is seeking re-election in 2020.

On Tuesday, the House Intelligence Committee released transcripts of closed-door testimony from Mark Sandy, a career official with the White House Office of Management and Budget, and Philip Reeker, acting assistant secretary of state for European and Eurasian affairs.

In his testimony, Sandy, one of the only current White House aides to agree to testify to congressional investigators, said a budget office attorney and another staffer in that office resigned partly because of concerns over the hold on U.S. military aid to Ukraine.

Reeker in his testimony discussed the “irregular” role three officials close to Trump – the ambassador to the European Union and Trump donor Gordon Sondland, Energy Secretary Rick Perry and Giuliani – played in U.S. policy toward Ukraine.

A Reuters/Ipsos opinion poll released on Tuesday found support for impeaching Trump tracked higher over the past few weeks of televised impeachment hearings. According to the poll, which split largely along party lines, 47% of respondents believed Trump should be impeached and 40% were opposed.