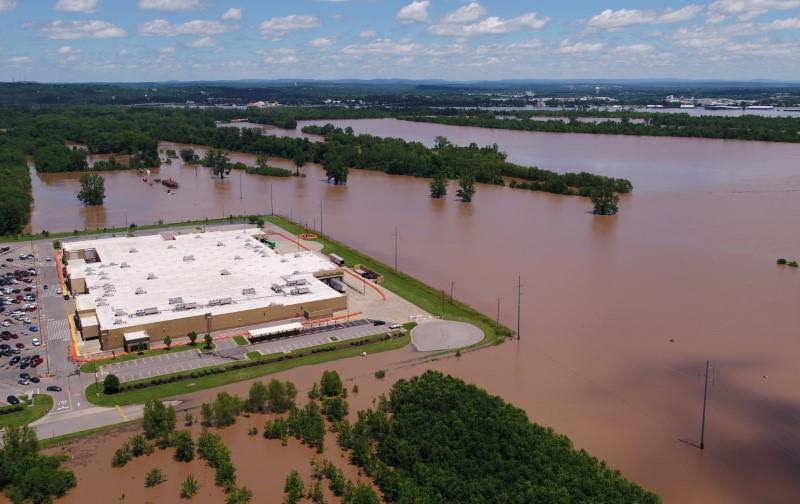 FILE PHOTO: A building sits submerged in the flood waters of the Arkansas River in this aerial photo in Fort Smith, Arkansas, U.S., May 30, 2019. REUTERS/ Drone Base

CHICAGO (Reuters) – U.S. government forecasters predict widespread flooding this spring in 23 states from the Northern Plains to the Gulf Coast, particularly in parts of North Dakota, South Dakota and Minnesota, but not as severe or prolonged as the historic Midwest floods of 2019.

“Ongoing rainfall, highly saturated soil and an enhanced likelihood for above-normal precipitation this spring contribute to the increased chances for flooding across the central and southeastern United States,” the National Oceanic and Atmospheric Administration said Thursday in its spring flood outlook.

The U.S. Climate Prediction Center projected above-normal precipitation in the Midwest and northern Plains for April through June, spanning the planting season for major crops such as corn and soybeans.

“The overall forecast for spring certainly indicates that we will be again facing some possibly significant planting delays in the Midwest again in 2020,” Brad Rippey, a meteorologist with the U.S. Department of Agriculture, said on a conference call about the spring outlook. “It looks like we are heading into a wet spring.”