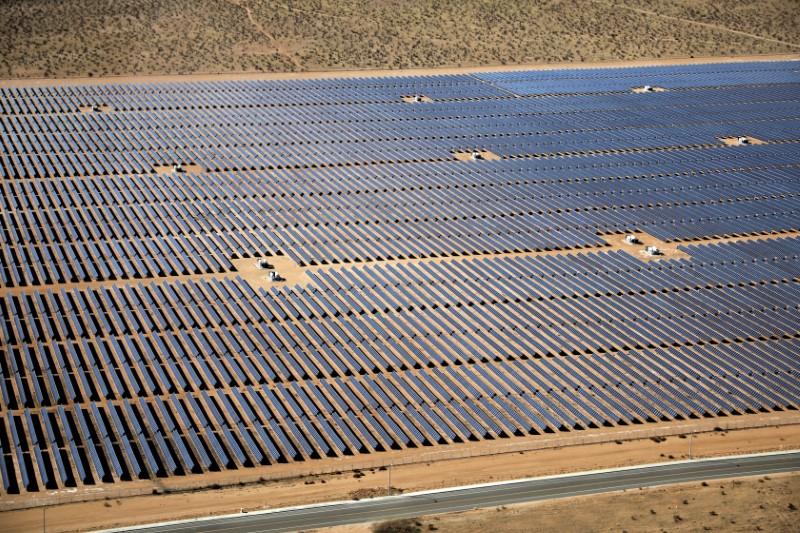 (Reuters) – Wind and solar energy companies on Thursday called on Congress to pass tax incentives that would help the sector avoid project delays and keep financing flowing amid a pandemic that has choked off supply chains and slowed construction.

FILE PHOTO: An array of solar panels is seen in the desert near Victorville, California, U.S. March 28, 2018. REUTERS/Lucy Nicholson

In a letter to House and Senate leadership, seven clean energy trade groups asked lawmakers to extend deadlines that would allow their projects to qualify for generous wind and solar federal tax credits despite delays caused by the spread of the coronavirus across the globe.

The American Wind Energy Association, which signed the letter, said disruptions caused by the spread of the virus could put 35,000 jobs at risk and jeopardize $43 billion in investment.

“The clean energy sector is one of the nation’s most important economic drivers. But that growth is placed at risk by a range of COVID-19 related impacts,” the groups, including AWEA, the American Council on Renewable Energy, Business Network for Offshore Wind, Energy Storage Association, National Hydropower Association, Renewable Energy Buyers Alliance and Solar Energy Industries Association, said in the letter.

Solar projects currently qualify for a tax credit of 26 percent that is scheduled to fall to 22 percent next year. If firms start construction or spend 5% of a project’s capital cost by the end of this year they are eligible for the 2020 credit.

Wind projects can claim a tax credit worth 1.5 cents for every killowatt-hour of electricity produced if they break ground before Jan. 1, 2021.

The industry wants those deadlines extended, and for the credits to be available for so-called direct pay, meaning they could be converted to cash.

Renewable energy tax credits allow developers to deduct a percentage of their projects’ costs over several years. They typically sell those benefits into the “tax equity” market, which allows companies with big tax burdens to cut those liabilities.

During an economic downturn, however, big banks and other corporations have smaller or no profits, dampening their appetite for those tax credits. A cash option would help prop up that key source of financing.

The industry groups are also asking for the enactment of a direct pay tax credit for energy storage projects.