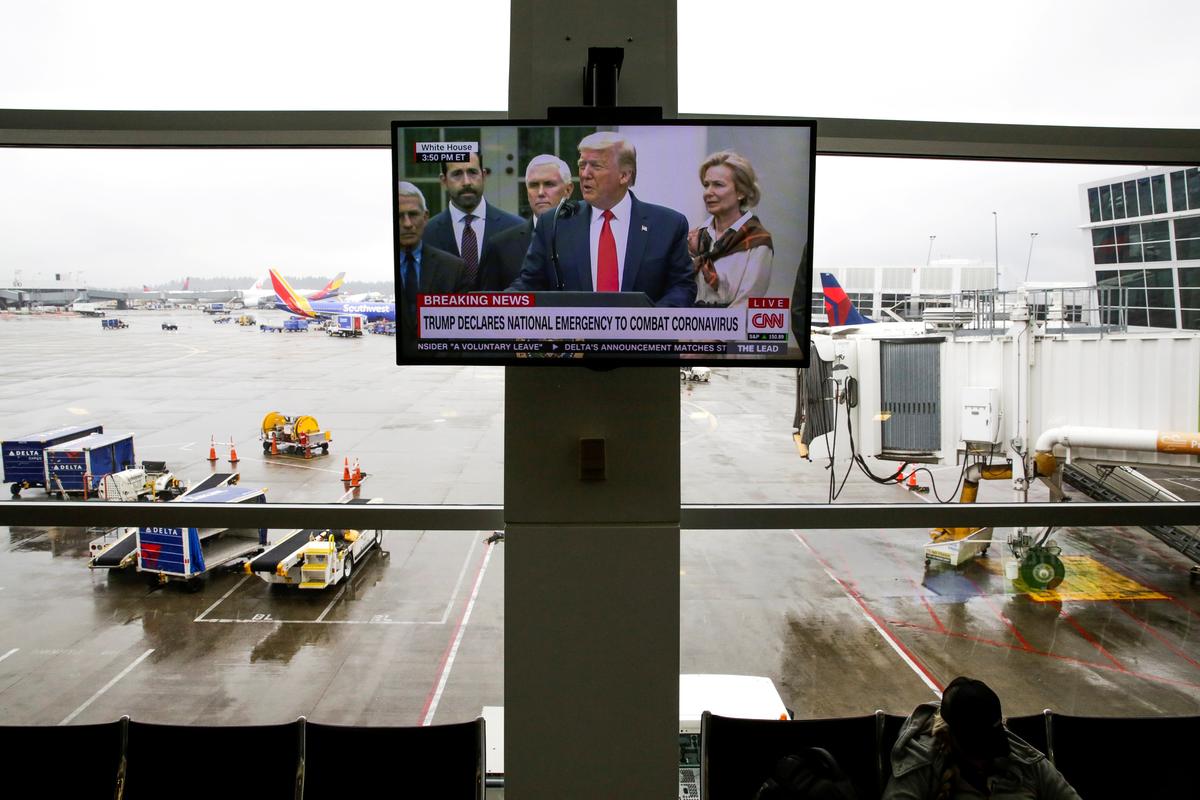 NEW YORK (Reuters) – Travelers returning to the United States and being screened for the coronavirus were met by long lines and massive delays at some major airports, prompting federal officials to deploy more staff and President Donald Trump to appeal for patience.

“Pardon the interruptions and delays,” Trump said in a Twitter post on Sunday afternoon. “We are moving as quickly as possible, but it is very important that we be vigilant and careful.”

His comments echoed those of officials from the Department of Homeland Security and Customs and Border Protection. They acknowledged delays caused by the new airport testing policy, but said it was necessary to protect Americans from the virus, which has rapidly spread around the globe.

The Trump administration last week imposed restrictions on travelers from continental Europe, and on Saturday extended the ban to Britain and Ireland. U.S. citizens and permanent residents would still be able to return home, but would be funneled through specific airports.

Acting Commissioner of U.S. Customs and Border Protection Mark Morgan said the agency was working to adjust its response, but acknowledged the problems faced by travelers waiting to enter the country.

“CBP recognizes that the wait times experienced yesterday were unacceptable,” Morgan said in a statement.

Chad Wolf, acting secretary of the Department of Homeland Security, said he understood that the situation was very stressful.

FILE PHOTO: U.S. President Donald Trump is pictured on a television at Seattle-Tacoma International Airport as he declares a national emergency over the coronavirus, in SeaTac Washington, U.S. March 13, 2020. REUTERS/Jason Redmond

“We will be increasing capacity, but the health and safety of the American public is first & foremost,” Wolf wrote on Twitter.

The medical screenings come in addition to the usual immigration and customs checks for travelers entering from abroad. They take about one minute each, he said.

Not all major U.S. airports were affected, and travelers arriving at Chicago’s O’Hare International Airport on Sunday afternoon said they did not wait in long lines.

Among those caught up in the chaos at the same airport the night before was Twitter user Sophie Bair, who posted a video of giant crowds and said she had waited for four hours.

“Pics can’t even capture the scale of this,” she wrote. “We’ve had to wait in 3 different stages of lines.”

Some travelers expressed concern that the long waits in heaving crowds could put them at greater risk of contracting the coronavirus, which causes the sometimes-deadly respiratory illness COVID-19. In the United States, the disease has infected more than 3,200 people and killed at least 62.

The concerns were shared by National Institute of Allergy and Infectious Diseases Director Anthony Fauci, who said the crowded conditions at the airports were “not helpful” to efforts to contain the virus.

FILE PHOTO: Travelers watch as U.S. President Donald Trump is pictured on a television at Seattle-Tacoma International Airport as he declares a national emergency over the coronavirus, in SeaTac Washington, U.S. March 13, 2020. REUTERS/Jason Redmond

“I’m not going to make policy with you, but if you can possibly lessen that crowding one way or the other, we should do it,” Fauci said on CNN’s “State of the Union” program.

Illinois Democratic Governor J.B. Pritzker, who had slammed the administration’s response in a series of Twitter posts on Saturday, said Wolf and U.S. Vice President Mike Pence told him in a Sunday morning phone call that CBP was increasing staff at the airport.

“I have no interest in playing politics as we grapple with this crisis, and I will be monitoring the situation at O’Hare throughout the day,” Pritzker wrote on Twitter.

Reporting by Peter Szekely and Maria Caspani in New York; Additional reporting by Doina Chiacu in Washington and Brendan O’Brien in Chicago; Editing by Lauren Tara LaCapra and Daniel Wallis