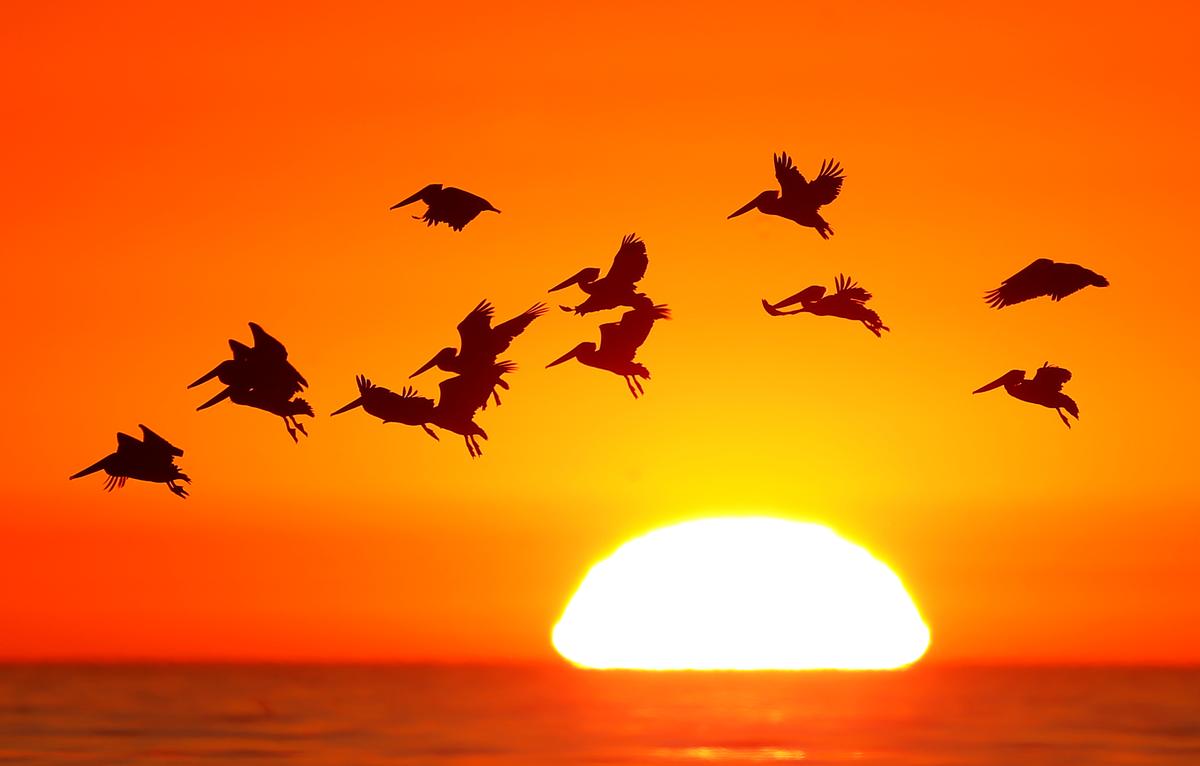 FILE PHOTO: Pelicans silhouetted by a setting sun fly as they look for fish along the California coastline near Leucadia, California November 1, 2013. REUTERS/Mike Blake

“We are in the midst of a bird emergency,” Audubon’s Chief Executive David Yarnold said at a news briefing. “This is as much about the future that we face and our children face as the birds face.”

If the emission of greenhouse gases blamed for global warming isn’t slowed, 389 out of 604 species in North America will face extinction, a report by the conservation group said.

As the climate warms, birds would be forced to relocate to find a more favorable habitat, and they may not survive this journey, the report said.

But if the expected rise in temperatures of 3 degrees Celsius (37.4 F) by 2080 is slowed to 1.5 degrees Celsius (34.7 F), nearly 40% of those species would no longer be considered vulnerable, researchers said.

Most threatened are species that live in the cold Arctic zone and those living in coastal areas.

“More than 50% of coastal birds will have to adjust their ranges,” said Audubon senior scientist Brooke Bateman.

Birds imperiled by the Earth’s predicted temperature rise include such widely recognized and beloved species as the piping plover, Baltimore oriole and golden eagle, Audubon said.

While some species are predicted to die due to rising temperatures, other birds that thrive in warmer, southern climates will relocate to northern locales, a move already underway, Bateman said.

Her father now regularly sees Carolina wrens, the state bird of South Carolina, near his home on New York’s Long Island, she said.

American robins, once recognized in northern U.S. states as a harbinger of spring when they return from their southern migration to avoid winter’s chill, instead are staying put during increasingly warm North American winters, she said.

Audubon’s report sounds the alarm just weeks after a similar one about threats to the avian population drew widespread attention.

Bird populations in the United States and Canada have dropped 29% since 1970, with a net loss of about 2.9 billion birds, scientists said last month. Climate change, however, was not the major driver of the population plunge, said Ken Rosenberg, an applied conservation scientist at the Cornell Lab of Ornithology and the American Bird Conservancy.

Instead, he said, people were to blame, particularly for widespread habitat loss and degradation, the broad use of agricultural chemicals that eradicate insects vital to the diet of many birds, and also for outdoor hunting by pet cats.