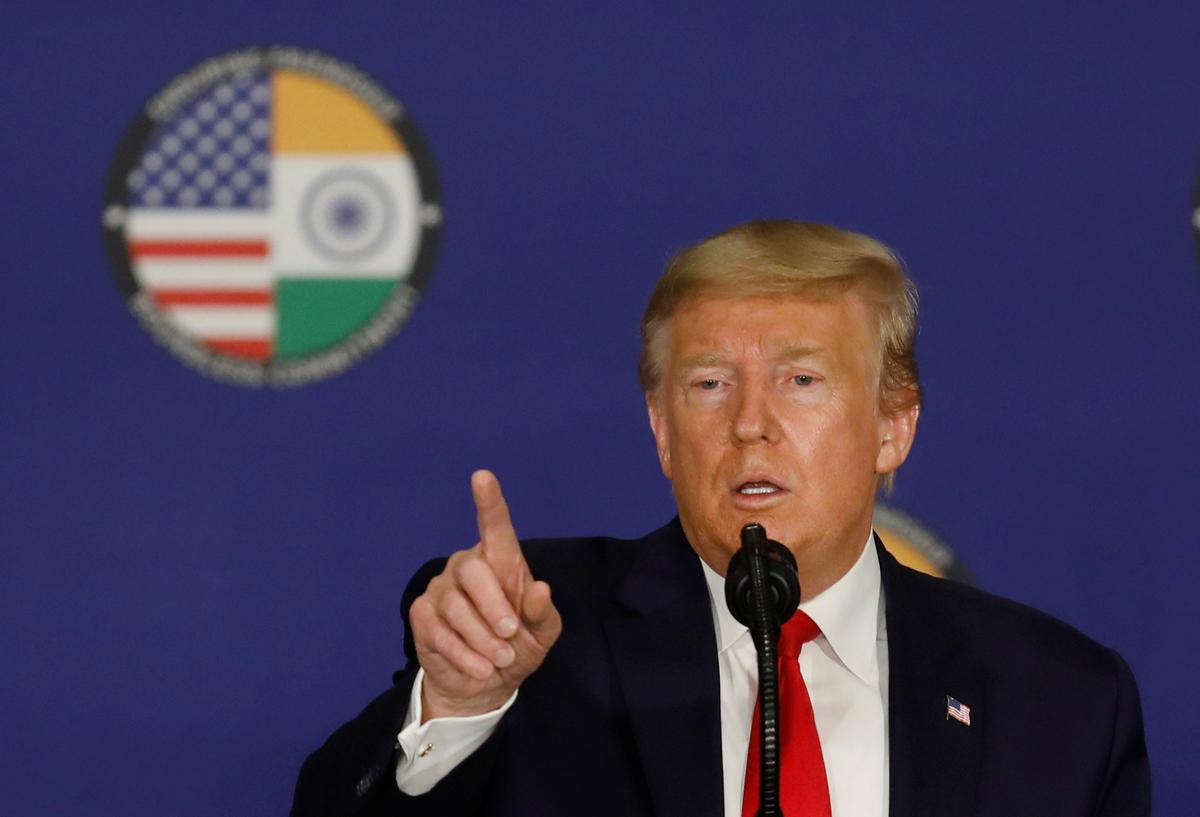 NEW DELHI (Reuters) – President Donald Trump turned his ire on the U.S. Supreme Court on Tuesday, calling on two of the liberal justices to recuse themselves from any cases involving him or his administration.

The Republican president, concluding a two-day visit to India, first tweeted out his criticism of Supreme Court Justices Sonia Sotomayor and Ruth Bader Ginsburg citing comments on Fox News and then expanded on his comments at a news conference in New Delhi.

Trump, criticizing members of the U.S. judiciary during a visit to a foreign country, appeared to refer to a dissenting opinion Sotomayor wrote on Friday when the court allowed a hardline Trump administration immigration policy to go into effect in Illinois.

Sotomayor questioned why the court, which has a 5-4 conservative majority, so frequently grants emergency requests filed by the Trump administration. Trump also pointed to comments Ginsburg made criticizing him during the 2016 presidential election campaign.

“I just don’t know how they cannot recuse themselves with anything having to do with Trump or Trump-related,” Trump said, calling the comments by the two jurists “inappropriate” and saying Supreme Court justices should be held to a higher standard.

Trump throughout his presidency has criticized federal judges after rulings he did not like, with critics saying he has engaged in political interference in the courts and has sought to compromise the independence of the nation’s judiciary. The most recent example was his series of comments about the prosecution of his friend and long-time adviser Roger Stone, as Trump publicly condemned the judge, jury and prosecutors in the case.

On Friday, the Supreme Court on a 5-4 vote allowed Trump’s administration to implement in Illinois new standards requiring immigrants to prove they will not require government assistance while lower courts hear challenges against the so-called “public charge” rules. The court had already allowed the policy to go into effect in the rest of the country.

The four liberal justices dissented, including Sotomayor, who wrote that the court has appeared to favor the Trump administration over other litigants seeking emergency actions.

The administration has made numerous quick appeals to the Supreme Court, sometimes bypassing lower federal appeals courts that normally would handle cases. This has been a hallmark of the administration’s legal strategy since the beginning of Trump’s presidency in 2017, partly because of the high number of policies that were blocked by lower courts early on.

Legal scholars said that while the strategy may seem rational, given that the high court’s conservative majority, it poses dangers to the credibility of the office of the U.S. Solicitor General, who is responsible for defending the administration’s policies at the Supreme Court.

“Perhaps most troublingly, the court’s recent behavior on stay applications has benefited one litigant over all others,” Sotomayor wrote, though she did not mention Trump by name.

“I fear that this disparity in treatment erodes the fair and balanced decision-making process that this court must strive to protect,” she added.

The new immigration rules went into effect on Monday.

“It’s almost what she’s trying to do is take the people that do feel a different way and get them to vote the way that she would like them to vote. I just thought it was so inappropriate,” Trump said of Sotomayor.

Before becoming president, Trump called on Ginsburg to resign after she criticized him in a series of media interviews including one in which she called him a “faker” and voiced fear for the country if he were elected. She later expressed regret for the remarks.

Referring to Ginsburg, Trump told the news conference that “she went wild during the campaign when I was running. I don’t know who she was for. Perhaps she was for Hillary Clinton, if you can believe it. But she said some things that were obviously very inappropriate. She later sort of apologized.”

U.S. law requires justices, who serve lifetime terms on the court, to step aside when there is a conflict of interest or genuine question of bias, but it leaves the recusal decision in the hands of the individual justices.

Ginsburg, 86, is the senior liberal on the court and was appointed by Democratic former President Bill Clinton.

Trump has appointed two conservative members of the court: Neil Gorsuch and Brett Kavanaugh. They have provided reliable votes in favor of administration policies in key cases.

Trump previously has also criticized conservative Chief Justice John Roberts, who in 2018 issued an unusual public statement defending the independence of the judiciary after the president accused a judge who ruled against his asylum immigration policy of being an “Obama judge.”

The president previously accused an Indiana-born judge handling a lawsuit against Trump University of bias given his Mexican heritage.