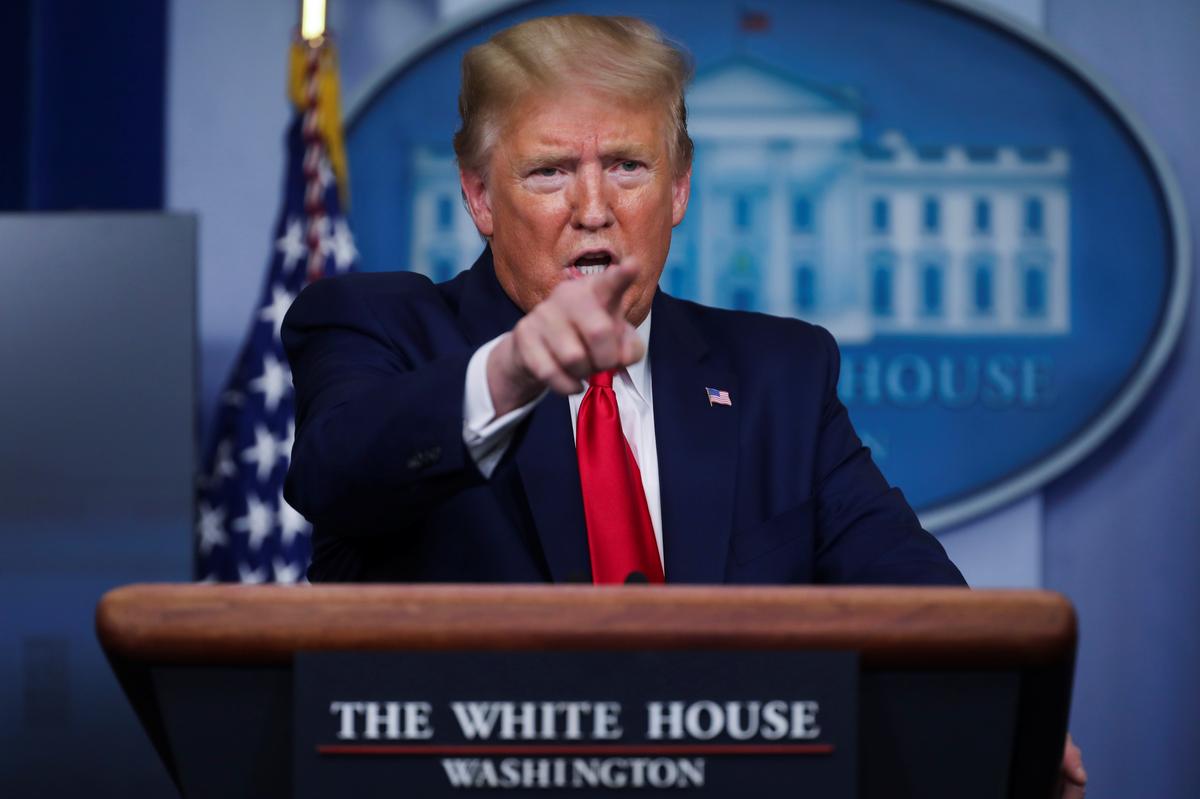 WASHINGTON (Reuters) – President Donald Trump said on Monday he will suspend all immigration into the United States temporarily through an executive order in response to the coronavirus outbreak and to protect American jobs.

U.S. President Donald Trump points to a reporter as he answers questions during the daily coronavirus task force briefing at the White House in Washington, U.S., April 20, 2020. REUTERS/Jonathan Ernst

The move, which the Republican president announced on Twitter, effectively achieves a long-term Trump policy goal to curb immigration, making use of the health and economic crisis that has swept the country as a result of the pandemic to do so.

The decision drew swift condemnation from some Democrats, who accused the president of creating a distraction from what they view as a slow and faulty response to the coronavirus.

Trump said he was taking the action to protect the U.S. workforce. Millions of Americans are suffering unemployment after companies shed employees amid nationwide lockdowns to stop the contagion.

“In light of the attack from the Invisible Enemy, as well as the need to protect the jobs of our GREAT American Citizens, I will be signing an Executive Order to temporarily suspend immigration into the United States,” Trump said in a tweet.

The White House declined to offer further details about the reasoning behind the decision, its timing, or its legal basis.

“As our country battles the pandemic, as workers put their lives on the line, the President attacks immigrants & blames others for his own failures”, former Democratic presidential candidate Amy Klobuchar said in a tweet.

Immigration is largely halted into the United States anyway thanks to border restrictions and flight bans put in place as the virus spread across the globe.

But the issue remains an effective rallying cry for Trump’s supporters.

Trump won the White House in 2016 in part on a promise to curb immigration by building a wall on the U.S. border with Mexico. He and his advisers have spent the first three years of his tenure cracking down on both legal and illegal entries into the country. Crowds regularly chant “Build the Wall!” at Trump’s political rallies, which are now idled because of the virus.

Trump has lamented the economic fallout of the outbreak; his stewardship of the U.S. economy was set to be his key argument for re-election in November.

The U.S. death toll from the virus topped 42,000 on Monday, according to a Reuters tally.

The U.S. economy has come to a near standstill because of the pandemic; more than 22 million people applied for unemployment benefits in the last month.

“You cut off immigration, you crater our nation’s already weakened economy,” former Democratic presidential candidate Julian Castro said in a tweet. “What a dumb move.”

The United States has the world’s largest number of confirmed coronavirus cases, with more than 780,000 infections, up 27,000 on Monday.

But the president has made a point of saying the peak had passed and has been encouraging U.S. states to reopen their economies.

“It makes sense to protect opportunities for our workforce while this pandemic plays out,” said Thomas Homan, Trump’s former acting director of U.S. Immigration and Customs Enforcement. “It’s really not about immigration. It’s about the pandemic and keeping our country safer while protecting opportunities for unemployed Americans.”

The United States in mid-March suspended all routine visa services, both immigrant and non-immigrant, in most countries worldwide due to the coronavirus outbreak in a move that has potentially impacted hundreds of thousands of people.

U.S. missions have continued to provide emergency visa services as resources allowed and a senior State Department official in late March said U.S. was ready work with people who were already identified as being eligible for various types of visas, including one for medical professionals.

The administration recently announced an easing of rules to allow in more agricultural workers on temporary H2A visas to help farmers with their crops.