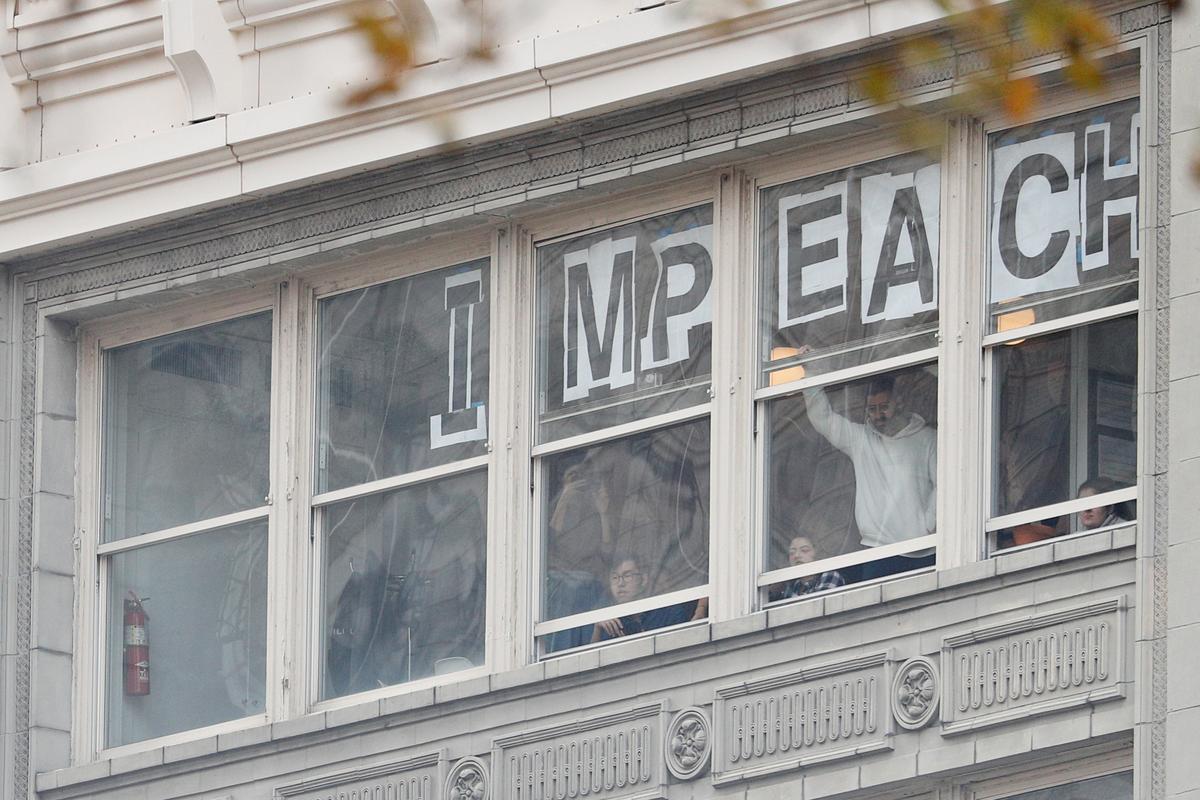 WASHINGTON (Reuters) – President Donald Trump seethed on Monday as Democrats in the U.S. House of Representatives prepared to enter a crucial new phase – the first public hearings – in their impeachment inquiry centered on his request that Ukraine investigate political rival Joe Biden.

On Wednesday and Friday, U.S. diplomats William Taylor, George Kent and Marie Yovanovitch are due to detail in public their concerns, previously expressed in testimony behind closed doors, that Trump and his administration sought to tie $391 million in security aid to Ukraine to an investigation of the former U.S. vice president and his son Hunter Biden.

The public testimony before the House Intelligence Committee will be carried by major broadcast and cable television networks and is expected to be viewed by millions of people, as Democrats seek to make the case for Trump’s potential removal from office.

The panel’s Democratic chairman, Representative Adam Schiff, has been a target of the Republican president’s attacks since the impeachment probe was launched in September after a whistleblower within the U.S. intelligence community brought a complaint against Trump over his July 25 call with Ukrainian President Volodymyr Zelenskiy.

Democrats, who control the House, have argued that Trump abused his power in pressing a vulnerable U.S. ally to carry out investigations that would benefit Trump politically. Biden is a leading contender for the Democratic nomination to face the Republican president in the 2020 election. Hunter Biden served on the board of a Ukrainian energy company called Burisma.

Trump has denied there was a quid pro quo – or exchanging a favor for a favor – in his dealings with Ukraine, defended his call with Zelenskiy as “perfect” and branded the probe a politically motivated “hoax.” Trump wrote on Twitter on Monday that the inquiry should be ended and the unnamed whistleblower, the whistleblower’s lawyer and “Corrupt politician” Schiff should be investigated for fraud.

Democrats, who control the House, consider the open hearings to be crucial to building public support for a vote on articles of impeachment – formal charges – against Trump. If that occurs, the 100-seat Republican-controlled Senate would hold a trial on the charges. Republicans have so far shown little support for removing Trump from office, which would require two-thirds of senators present to vote to convict him.

No U.S. president ever has been removed from office through the impeachment process. It has been two decades since Americans last witnessed impeachment proceedings against a president. Republicans, who then controlled the House, brought impeachment charges against Democratic President Bill Clinton in a scandal involving his sexual relationship with a White House intern. The Senate voted to keep Clinton in office.

The House Intelligence Committee on Wednesday will first hear from Taylor, the top U.S. diplomat in Ukraine. Taylor told lawmakers in closed-door testimony he was unhappy that the administration had held up the congressionally approved aid to help combat Russia-backed separatists in the eastern part of Ukraine.

Taylor said he also became uncomfortable with what he described as an “irregular channel” of people involved in Ukraine policy, including Rudy Giuliani, Trump’s personal lawyer.

Kent, a senior State Department official who oversees Ukraine policy, will appear at Wednesday’s hearing as well. Kent was also concerned about Giuliani’s role in conducting shadow diplomacy – and has testified that he was cut out of the decision-making loop on Ukraine matters.

On Friday, the committee will hear from Yovanovitch, who Trump removed as U.S. ambassador to Ukraine in May. She has testified that she was ousted after Giuliani and his allies mounted a campaign against her with what she called “unfounded and false claims by people with clearly questionable motives.” Giuliani had been actively trying to get Ukraine to carry out investigations of the Bidens.

“I hope everyone who testifies will go do so truthfully, accurately. When they do … I think America will come to see what took place here,” U.S. Secretary of State Mike Pompeo told WCSC-TV, a CBS News affiliate in South Carolina, on Monday.

“I was part of America’s Ukraine policy. We were very clear. We wanted to make sure that the corruption that has been existing in Ukraine for an awfully long time was reduced,” Pompeo said.

Some Republicans have argued that Trump was motivated by a push to root out corruption in Ukraine, rather than a desire to pressure a foreign government to smear one of his domestic political rivals.

Democrats are likely to call further witnesses after this week.

Trump and Giuliani have made accusations – without providing evidence – that Joe Biden sought the dismissal of a Ukrainian prosecutor to block a corruption probe of Burisma. The Bidens have denied wrongdoing.

Republicans on the Intelligence Committee will be permitted to question the witnesses this week and defend the president. The president’s lawyers will not be allowed to do so – something Trump has complained about bitterly.