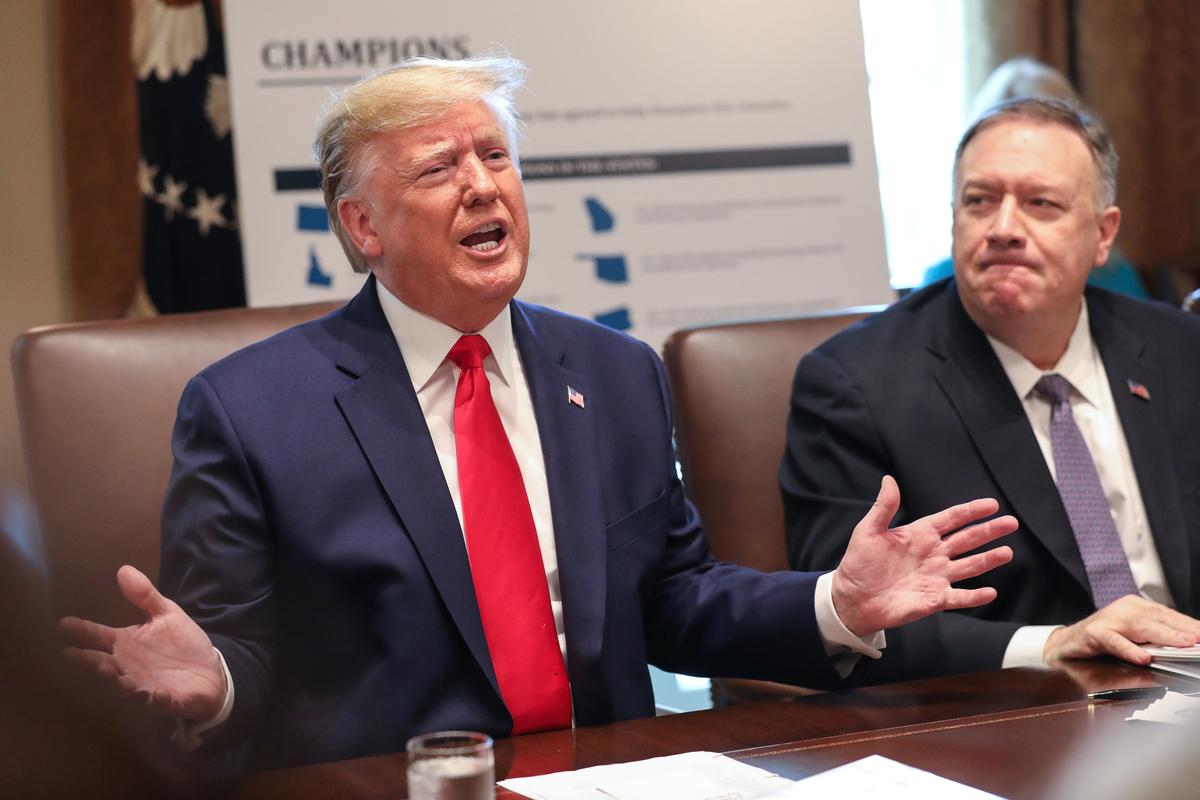 WASHINGTON (Reuters) – President Donald Trump on Monday exhorted fellow Republicans to get tougher and fight for him, saying the Democratic-led U.S. House of Representatives wants to impeach him “as quick as possible” over his request that Ukraine investigate a political rival.

Trump made his comments during a White House Cabinet meeting as Democrats sought to build public support for their fast-moving impeachment inquiry and the administration pressed its efforts to stonewall a probe that threatens his presidency.

Few Republican lawmakers have shown an inclination to remove Trump from office. But Trump has come under sharp criticism from Republican Senator Mitt Romney.

And other Republicans have expressed misgivings about Trump policies, including criticism by Senate Majority Leader Mitch McConnell and Senator Lindsey Graham of his withdrawal of U.S. troops here in northeastern Syria, exposing U.S.-allied Kurdish fighters to a Turkish cross-border offensive.

Approval of articles of impeachment in the House would prompt a trial in the Republican-led Senate on whether to remove Trump from office. Trump is seeking re-election next year.

Asked if it is a foregone conclusion that House Democrats will vote to impeach him, Trump said that “they’re not going to beat me in the election, so of course they want to impeach.”

“They want to impeach. And they want to do it as quick as possible. And that’s pretty much the story,” Trump added.

Trump said the Democrats are “vicious and they stick together.”

In an interview aired with “Axios on HBO,” Romney denounced Trump’s requests to Ukraine and China to investigate Biden, questioned Trump’s character, criticized his decision to “abandon” Kurdish allies in the Syria war and deplored his hush money payment to an adult film star. Romney was the 2012 Republican presidential nominee.

Trump, a wealthy real estate developer, also said serving as president has personally cost him $2 billion to $5 billion dollars. Trump also expressed annoyance at having to reverse his decision to stage the Group of Seven summit in June at his Trump National Doral golf resort in the Miami area. His plan to host the international gathering at a business he owns was criticized by Democrats and Republicans who said it gave the impression he was profiting from being president.

Acting White House budget director Russell Vought said both he and Michael Duffey, associate director for national security programs at the Office of Management and Budget, would not provide depositions to the committees leading the impeachment inquiry in the Democratic-led House.

Duffey had been scheduled to testify behind closed doors on Wednesday as Democrats scrutinize Trump’s decision to withhold $391 million in security aid to Ukraine before he asked its president to investigate former Vice President Joe Biden.

Other current and former administration officials have defied White House demands that they not cooperate with the inquiry, which threatens Republican Trump’s presidency. Another round of crucial testimony is set for this week, including by Bill Taylor, the top U.S. diplomat in Ukraine, on Tuesday.

House Democrats released a fact sheet and video to try to make their case for impeachment, drawing on information already made public about the Ukraine scandal. The impeachment inquiry focuses on Trump pressuring a vulnerable foreign ally to interfere to his benefit in the 2020 U.S. presidential election by providing political dirt on Biden, a leading contender for the Democratic nomination to face Trump.

At issue is a June phone call in which Trump asked Ukrainian President Volodymyr Zelenskiy to investigate Biden and his son Hunter Biden, who had been a director of a Ukrainian energy company, as well as a discredited theory that Ukraine, and not Russia, interfered in the 2016 U.S. election. U.S. intelligence agencies and a special counsel have concluded that Russia used a campaign of hacking and propaganda to boost Trump’s candidacy.

Trump has said he did nothing wrong and that the Zelenskiy call was “perfect.”

Diplomat Taylor could be one of the most important witnesses yet. Taylor’s text messages with U.S. Ambassador to the European Union Gordon Sondland have surfaced as a central thread in the probe.

The congressionally approved U.S. security aid that Trump had withheld was intended to help Ukraine deal with Russia-backed separatists in the eastern part of the country. Zelenskiy agreed to Trump’s requests. Trump later provided the aid.

“I think it’s crazy to withhold security assistance for help with a political campaign,” Taylor, the U.S. charge d’affaires in Ukraine, said in a text to Sondland.

A planned deposition on Wednesday by Philip Reeker, the acting U.S. assistant secretary of state for European and Eurasian affairs who oversaw U.S. policy toward Ukraine, has been postponed at the request of the lawmakers carrying out the impeachment inquiry and no new date has been fixed, a source familiar with the matter said.

The source said the postponement had to do both with memorial and funeral arrangements for Representative Elijah Cummings, who was chairman of one of the three committees leading the inquiry, as well as with a failure to provide sufficient notice of the planned deposition under congressional rules.