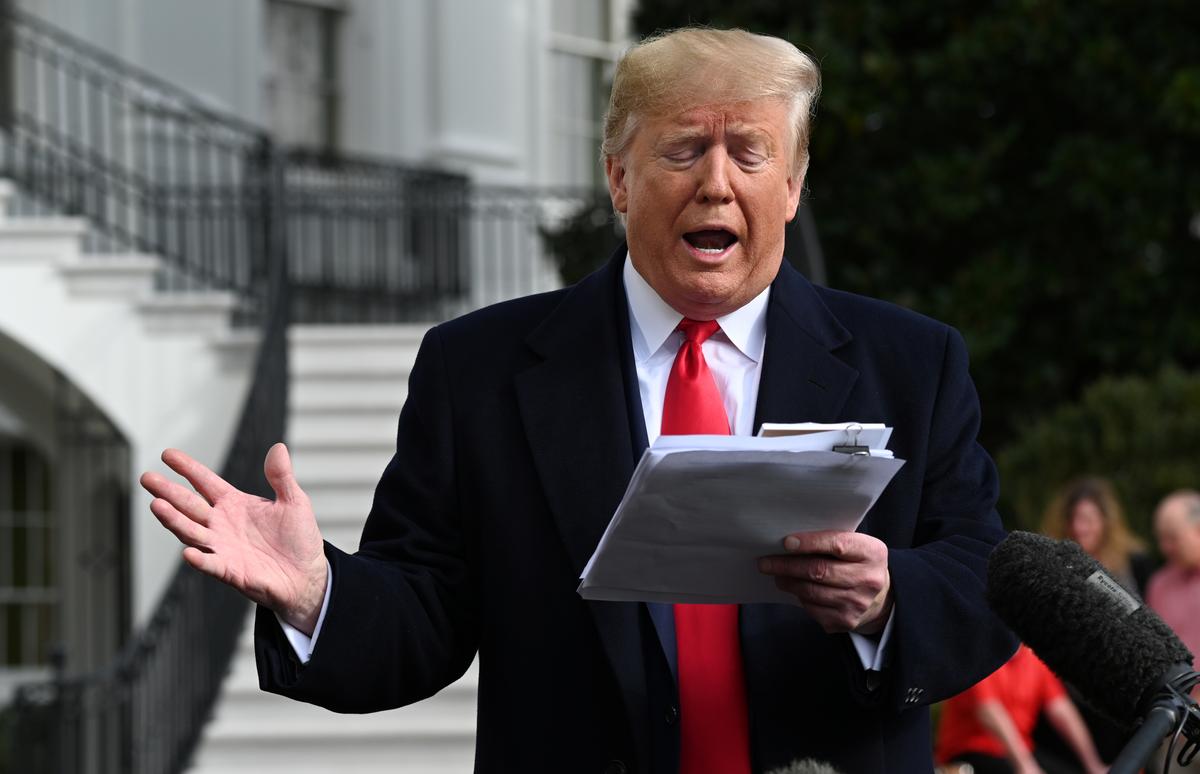 WASHINGTON (Reuters) – President Donald Trump, citing a portion of U.S. Ambassador to the European Union Gordon Sondland’s congressional testimony in a House impeachment inquiry on Wednesday, said it showed he wanted no “quid pro quo” with regard to Ukraine.

U.S. President Donald Trump holds what appears to be a prepared statement and handwritten notes after watching testimony by U.S. Ambassador to the European Union Gordon Sondland as he speaks to reporters while departing for travel to Austin, Texas from the South Lawn of the White House in Washington, U.S., November 20, 2019. REUTERS/Erin Scott

Speaking to reporters at the White House, Trump cited comments by Sondland about a conversation with the president, in which he said Trump told him he wanted nothing from Ukraine.

While Trump’s characterization of the testimony was accurate, it was incomplete.

He did not mention that Sondland also said during the same exchange that he relayed the president’s remarks to another diplomat concerned about the pressure being applied simply to signal he had taken the issue as far as he could.

“My reason for telling him this was not to defend what the president was saying, not to opine on whether the president was being truthful or untruthful, but simply to relay ‘I’ve gone as far as I can go,’” Sondland said.

“I would say that means it’s all over,” Trump said of the impeachment investigation.

In his testimony, Sondland told lawmakers there was a quid pro quo, in which a desired meeting with Trump was being withheld to try to push Zelenskiy to launch investigations that Trump wanted.

Sondland said he was following Trump’s direction in helping to pressure Ukraine into investigating a political rival of the president, former Vice President Joe Biden.

House Intelligence Committee Chairman Adam Schiff said the testimony went “to the heart of the issue of bribery as well as other potential high crimes and misdemeanors” that Democrats are considering.

The president sought to downplay his relationship with Sondland while also giving him light praise.

“I don’t know him very well. I haven’t spoken to him very much,” the president said. “Seems like a nice guy though.”