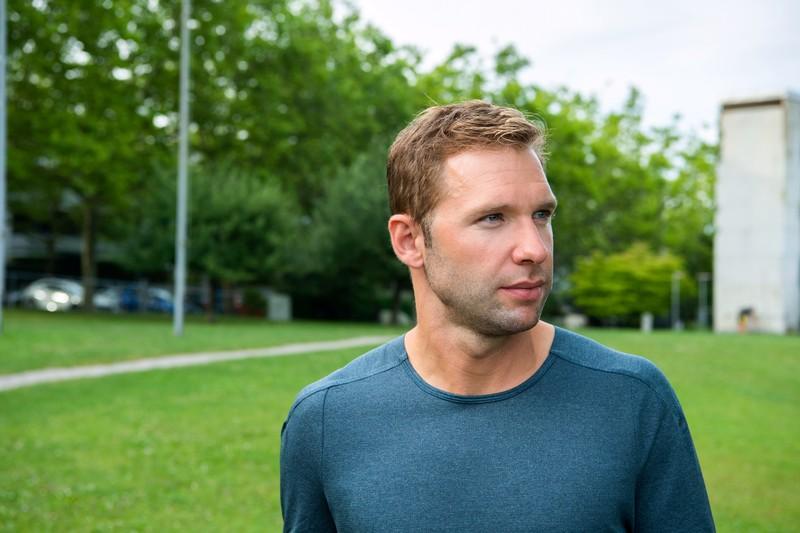 Belgian tri-athlete Bart Aernouts is seen at a training field before an Ironman competition in an undated photo in an unknown location. Janosch Abel/Handout via REUTERS

Unfortunately for him, four minutes earlier German Patrick Lange became the first, relegating Aernouts to second place on the lava fields of the Big Island.

He is back for Saturday’s race hoping to go one better after almost perfect preparation but knows it is impossible to predict how the body will hold up in such a long and arduous event.

“I try not to expect too much because race day is always full of surprises. It’s always dangerous when you expect something,” Aernouts said in a telephone interview with Reuters.

“My preparation has been really smooth, nearly perfect, but it’s also something I’ve learned in the past that it’s not always a guarantee to have a perfect race.

“Last year I didn’t have too many expectations and had a nearly perfect day from start to finish.”

Aernouts, 35, is one of the favourites at an event which started in 1978 to settle a friendly argument between endurance athletes in Hawaii as to who was the fittest.

It has become so popular that thousands of entrants are turned away to keep the field to a manageable 2,000 athletes.

The standard Ironman distance — 3.8km swim, 180km bike ride and 42.2km run — is demanding but with the inevitable strong winds, humidity and hills it becomes a tougher test.

Top athletes burn more than 1,000 calories an hour and sweat away copious amounts of fluid, which makes energy consumption and hydration so important.

“I count my grams of carbohydrate every hour,” said Aernouts, who consumes 80-100 grams an hour, the equivalent of three or four bananas.

“The hardest thing is to be focused the whole day and not forget about your nutrition. Sometimes it’s easy to lose your focus a little bit, and then you don’t pay attention to your nutrition and often it’s too late before you realise.”

He also drinks at least one litre of fluid per hour.

Swimming is Aernouts’s weak link, relatively speaking, which means he is resigned to starting the bike leg a few minutes behind most of his rivals.

He does not stress about it, happy to ride alone and treat the race pretty much as an individual time trial, relying on a combination of intuition and feedback from a power meter that tells him how many watts of energy he is generating.

“Being not the best swimmer is maybe not a bad thing,” said Aernouts, an ambassador for Swiss sportswear company On.

“If you’re in a big group maybe you forget about your own race plan and get in trouble later.”

Aernouts knows at his age he probably won’t have too many more chances to claim the ultimate prize.

“The hard work is done,” he said. “Last year I didn’t have too many expectations and had a nearly perfect day from start to finish.

“To feel strong and powerful on race day during the whole race is a really amazing feeling. That’s what I want to experience one more time in Kona.”

Reporting by Andrew Both in Cary, North Carolina; Editing by Ken Ferris